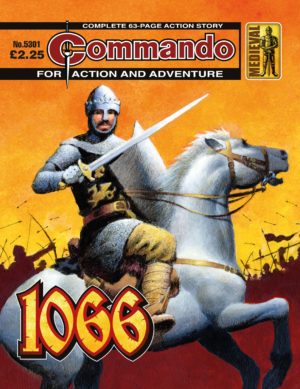 “So you want to hear the story of Hastings, eh? The saga of the Fighting Man and the fall of a nation. Well, all stories start far from their endings…”

1066 is an iconic year in English history. It was the year that William the Conqueror seized the throne, changing the royal line. The year that brought in French customs and language, transforming English culture. A year that every English school kid learns about.

And it’s the year I’ve brought to life in my latest Commando comic.

I wanted to show a different perspective on the Norman invasion. Thanks to the Bayeux Tapestry, we’re used to hearing the Norman side. It’s the story of the victors and the story of powerful people.

Instead of focusing on William, I decided to tell the story from the English point of view, through the fictional character of Durwin. He’s not one of the great lords vying for control of the country, but a warrior in the household of Harold Godwinson, claimant to the English throne. This let me do a few things that I think make for a more interesting story.

First, it adds a personal conflict. Sure, Duke William and Earl Harold had met each other, and Tostig Godwinson’s alliance with the Norwegians hints at acrimony between him and his brother. But for these men, the conflict was principally about power.

Durwin’s motivations, on the other hand, are purely personal. He’s looked up to Harold as a hero his whole life, so the chance to fight for him is a great honour. When Harold breaks his oath, that’s also personal, a moment of terrible disappointment as Durwin sees the flaws in his hero, a moment that propels him into danger.

Focusing on Durwin also let me show all three battles of the 1066 campaign – Fulford, Stamford Bridge, and Hastings. None of the leading figures in this political struggle were at all three battles, but it’s likely that some English warriors were, and so Durwin became a vehicle for me to show the full action.

There’s a hierarchy to the way these battles are remembered. If you know anything about English history, you know about Hastings, where the Normans beat the English and conquered the country. If you’ve taken an interest in English history, then you probably know that the English defeated another invasion first, this one by the Norwegians, at Stamford Bridge. But few people know that, before that, the Norwegians beat the English at Fulford. For several days, it looked like the Vikings might be the ones to take over.

Together, these three battles tell a fuller and more satisfying story than they do on their own. We see the English struggle, recover, and taste the sweet relief of victory, only to have it snatched away on the south coast. The forgotten Battle of Fulford makes the story stronger.

This comic has one other unusual touch for an issue of Commando – it’s told in the first person. Commando’s text boxes are normally in the third person, telling the story from the outside. But I wanted to make these events both more personal and more epic. To do this, I switched to having Durwin tell the story, bringing us closer to his perspective while reminding us that the story of that year is one that’s been told and retold, becoming the stuff of legend and of national pride. It’s history that’s grown in status through the retelling, from the Bayeux Tapestry to childhood recountings in a thousand schoolrooms up and down the land.

So after all of that you want to hear the story of Hastings, eh? The saga of the Fighting Man and the fall of a nation. Then you can get Commando 5301 through newsagents or Comixology now.