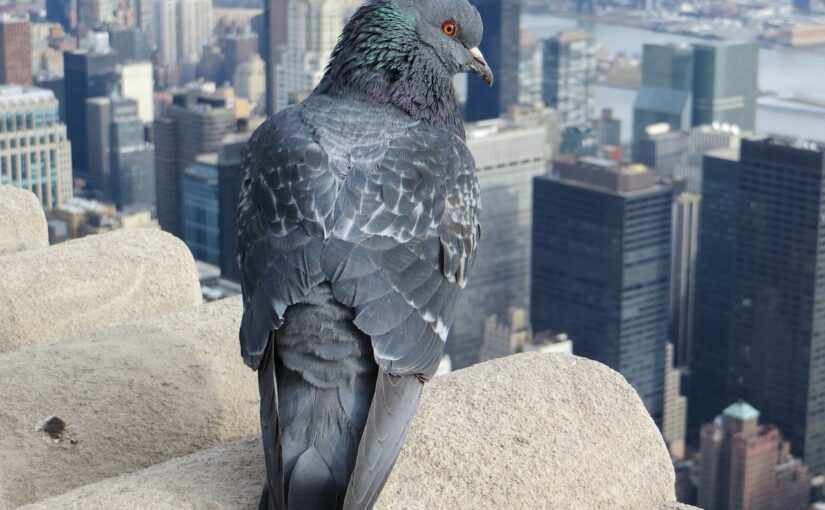 Leo crept along an alleyway and out along dirt-smeared store fronts, stalking pigeons through the city streets. He knew that they were here. They always had been. They always would be. But somehow, they were harder to find these days. He had no trouble finding mice and rats, squirrels in the parks, small birds among the rooftops. The old city was full of exquisite morsels, but pigeons were a distant grey movement, tantalisingly out of reach.

He stopped to lap at a puddle in the shadow of a statue, a vast feline body with its face worn smooth. Limbless trees lined the road ahead.

When Leo was a kitten, pigeons had been plentiful in the old city, drawn down by the litter humans left. That was back when floods barrelled through the streets, bludgeoning and drowning; when winds ripped tiles from the roofs and rained down shards of shattered windows. It had felt like the world was ending.

Not that the old city was safe now. A fox emerged from the mouth of a drain, its eyes feverish with one of the city’s sicknesses. Some creatures caught infections that slowed them down. Strange shining things latched onto others, changing how they behaved. This fox had one of those silvery objects clamped to its head and a hungry, desperate  look.

The fox charged at Leo, who dashed to a limbless tree, dug his claws in and scrambled frantically up. The fox tried to follow but the shining thing on its head wrecked its balance. It fell to the ground, squirming and twitching.

From the top of the tree, Leo gazed across the rooftops. On these clear days, he could see all the way to a new city, one of the tall ones with gleaming walls and woodlands on their roofs. When the humans left the old city, they had taken Leo with them. He’d found himself in a place that was safe, calm, and clean. The humans had seemed happy. So had the dogs, of course, even most of the cats. But Leo couldn’t settle. He’d spent half his life on the perilous streets, and they called to him.

The old city had changed different cats in different ways. Leo was smarter and could understand humans better than most. He knew that they had left the old city standing on purpose, a way to remember the terrible past.

Looking now from his treetop to the centre of the city, Leo saw familiar grey wings flutter around a vast dome. That was where he needed to be. Thick wires ran along the line of trees to there. He placed his paws on the wire and, with swift steps, followed the swaying path across the city.

Leo’s journey back from the new city had been its own balancing act, swaying between the need to keep moving and the risk of recapture and return. By then the storms were fewer, the floods less dramatic. The old city had seemed strangely quiet without its human occupants.

Over the years that followed, a calm had settled across Leo’s world. Life became easier and he became discontented. He needed a challenge.

Then he realised that the pigeons were up to something.

A hundred feet from the dome, the wire ended, severed and dangling. Frustrated, Leo leaped from the treetop to a nearby window, through its rotting frame, down mouldy stairs, and back into the street. A pigeon flapped past overhead. Wires trailed from the gleaming thing between its claws. Leo purred softly. He almost had them.

Skulking from shadow to shadow, Leo approached the domed building. One of its doors was ajar, hinges broken and base pressed into the floor. Leo slipped past. From deeper in the building, he heard clattering and fluttering.

He tensed at the smell of another cat. This might mean trouble.

That scent led Leo slowly up narrow stairs. At the top, a balcony looked out across the chamber beneath the dome. In its centre hung a mass of human-made pieces, dark and stark-edged with wires binding and connecting them. Pigeons fluttered around, pushing those pieces together. The floor below was pale and slick with their mess, but their construct was pristine.

Like Leo, the pigeons had been changed by the things humans left behind. But while Leo had become ever more solitary, the pigeons clung closer together. They were the true city-dwellers now, and they were making something.

A cat perched on the edge of the balcony, woefully skinny beneath her tabby fur. She had clearly been around the wrong sort of humans, as she bore a scar on her hip where some device had been removed. She looked hungrily at the pigeons and pulled back her lips, but closed them without a sound. Utterly preoccupied with the pigeons, she showed no sign of sensing Leo, but tensed, ready to pounce.

Leo leapt, grabbed the tabby, dragged her back. She hissed and fought, claws slashing, but his experience and her hunger favoured him. He pinned her down, then looked from her to the pigeons and back again, until she got the message. Resentfully, she drew her claws in and untensed.

Leo pressed his cheek against hers and purred. Later, he would show her how to catch the twisted animals of the old city, how to live here away from humans. First, though, he had to see what had brought him here.

Leo and the tabby peered through the balcony rail. Moving like a single beast, the pigeons fluttered to the edge of the room and settled, cooing.

After a moment, the thing they had made stirred. Shapes like wings scraped the floor. The pigeons cooed again, an excited chorus, then flocked in to work at their creation once more.

The tabby’s soft hiss was a question. Leo didn’t know the answer, but he knew that this was important. In the city humans had left as a warning, animals were coming into their own.

Ashes of the Ancestors

In a haunted monastery at the heart of a crumbling empire, a lone priest tends the fires for the dead. A servant bound by the bones of her family, Magdalisa is her people’s last link to the wisdom of the past.

But as the land around them dies, new arrivals throw the monastery into turmoil. A dead warlord demanding recognition. Her rival, seizing the scraps of power. Two priests, both claiming to serve the spirits, both with their own agendas.

As ancient shadows struggle for the soul of an empire, Magdalisa must decide how far she will go to keep tradition alive.

A fantasy story about tradition and our relationship with the past, Ashes of the Ancestors is available for pre-order now: