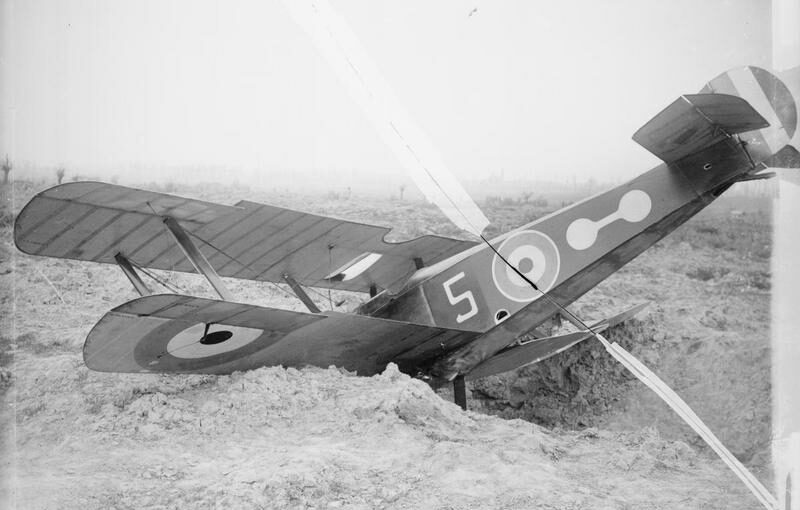 The Sopwith Camel biplane hit the ground with a thud and a screech of rending metal. The undercarriage tore off on the edge of a shell hole and the plane skidded on its belly, mangled propeller churning the mud. Aubrey clung on white knuckled, trying not to scream, because dammit, that wasn’t what a gentleman did.

After seconds that took years off Aubrey’s life, the plane slid to a halt. He looked around. Someone was moving half a mile away, near the German trenches, but were they moving toward him? He grabbed everything of use from the ruined plane—a pistol, a flare, a map, a compass, a bottle of water—and stuffed them inside his flying jacket, then leapt out. He sank ankle deep in the mud that was the defining feature of autumn 1917—muddy roads, muddy trenches, muddy airfields that complicated take-offs, landings, and maintenance.

The map and compass confirmed what he already feared, that he had landed well behind the German lines. Surrender might be the safest option, especially given the ache in his ankle, but a gentleman didn’t simply give up. Moving at a crouch, and wincing whenever that ankle found a bump, he headed west.

He’d only gone a few hundred yards when movement caught his eye. A German patrol appeared over the edge of a crater, two of them looking right at him. One raised a rifle while the other shouted in alarm.

Aubrey fired wildly with his pistol. The rifle cracked and pain ripped through his arm, but the Germans flung themselves down behind the crater’s edge. Fighting back pain, Aubrey fled across the battered landscape, firing over his shoulder until the hammer clicked on empty cartridges, then flung himself head first into a shell hole.

He slid down the crater until he hit a broken transport cart and the body of the horse that had pulled it. Waving away flies, he scrambled into the gap between the cart and the cadaver, even as German voices approached. There wasn’t space in the hiding place for his feet, so he forced them into the mud. Then he lay still, trying hard not to throw up despite the rotten stench.

Two German soldiers appeared at the edge of the crater. They looked down, rifles at the ready, and for a moment Aubrey felt like his heart had stopped, he was so certain they had seen him. Another German shouted nearby.

“Nein,” one of the soldiers said. “Niemand hier.”

Then they walked on, around the edge of the crater and away.

Aubrey waited until the voices and footsteps vanished, then waited fifteen minutes more. At last, he dragged himself out of his hiding place. The movement finally made the nausea too much, and he vomited. At least that stopped his stomach churning.

He swirled a little water from the bottle around his mouth, then spat it out, washing away the taste of bile. Then he peeled off his jacket and washed mud from the bullet hole in his arm. The bullet hadn’t hit the bone, which was a relief, but it hurt like Hell, and he had to use up the map and one shirt sleeve to stifle the bleeding. Shivering, he pulled his jacket back on, fastened it, and assessed his remaining provisions. One water bottle, empty. One pistol, likewise. One compass, broken sliding down the crater. One flare.

He needed to get back soon, to get that arm seen to. A few days out here and infection was sure to set in, not to mention hunger and thirst. It wasn’t like he could fight his way through the enemy lines, so he would try to sneak across after dark. If someone caught him, the flare would be his weapon of last recourse, but only if he was nearly through. Otherwise, it would draw every German for miles around onto him.

The one advantage of being shot down in November was that there wasn’t long to wait until dark. Three shivering hours later, the only lights were the stars and a few beams from lanterns around dugout doors.

Aubrey crept from his hole toward the German lines. As he got closer, he heard people moving. He flattened himself against the ground and wormed his way through the mud to the back of a German trench.

The place was crowded with soldiers, the trench lines full in every direction. Their buttons and bayonets were covered in boot black, so as not to catch the light. Their silence was grim as the grave.

If he waited for them to go, Aubrey could raid their dugouts for supplies, then make his way back to British lines through the chaos of battle. For a lone downed pilot, it was perhaps the best chance of getting home. But for the British soldiers in the opposing lines, it would be a terrible night.

A gentleman might not give in, but he didn’t leave other chaps in the lurch. Aubrey rolled onto his back, slid the flare from his jacket, and waited. As the Germans climbed out of their trenches and started their silent advance, he pulled the tab on the flare. It shot into the air, then exploded in a bright flash. There were cries of alarm from the Germans, and more from the west, where the British lines lay. Gunfire opened up and more flares were launched. Revealed by their phosphorous glare, the German advance collapsed into chaos.

Two soldiers scrambled out the back of the trench. Aubrey couldn’t see their faces or understand the words they said, but he could see their pistols, and he could hear the fury in their voices.

A gentleman didn’t just give up, but he was too cold and wet to give a damn about standards any more. Much as it galled him, he would have to sit out the next round of the war.

He raised his hands. “I surrender.”