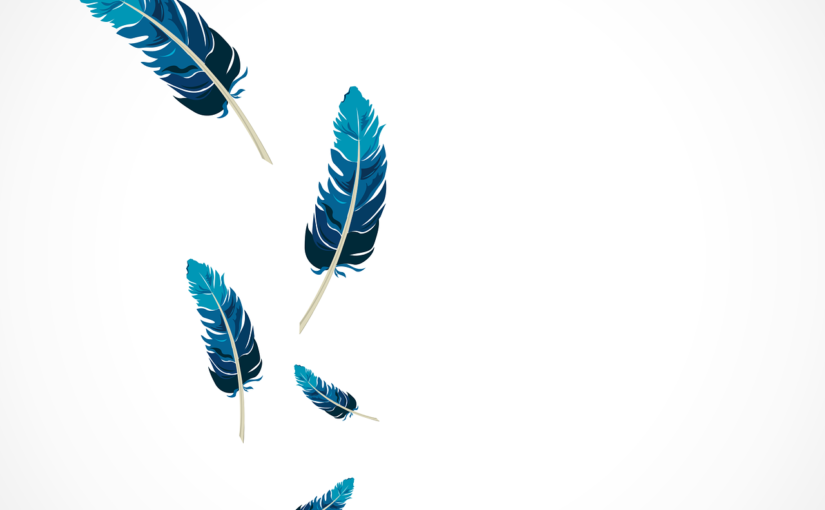 When Russ was young, he would stare out the classroom window, disinterested in the teacher, the helpers, and the other children, just watching the birds. Robins hopping through the hedgerow. Crows perched on lampposts. Gulls soaring on the breeze. To be so light, freed from the grasping hands of gravity, seemed like the most wonderful thing. The lives of birds made sense.

Whenever he saw a fallen feather, however small or battered or filthy, even if there was blood at its tip where some predator had torn it loose, Russ would keep that feather and take it home. His mother, though unsettled to see how he lined his bed, chose not to nurture one more argument in a household full of hurt. His father snapped that Russ should at least clean the damn things, but Russ ignored him. What if he cleaned off something important? What if he washed away the magic of flight?

The pile of feathers grew, day by day, week by week, month by month. Urban feathers and rural feathers, falling from either side of their home. Feathers from the garden, from school, from the woods, from weekends away with one parent while the other cleared their head. Wherever he went, Russ came home clutching a precious new treasure, light in his hand and soft on his skin.

As he added each feather to his bed nest, he imagined what it would be like to be that bird, to be clothed in feathers and fly free, away from all the strains and pains of the world. From trying to make sense of the things people said, of the words on the pages of books, of the rules that no one explained.

On the night his father left, carried away by the car’s angry roar, Russ clutched the feathers tight. They were so familiar, he wasn’t sure where his skin ended and the birds began. Out in the twilight, another feather fell in slow spirals. Russ opened his bedroom window and reached out. The feather landed in his palm, soft and heavy as sorrow. He added it to his nest, then settled in his sanctuary and fell asleep.

He woke to find his window open, letting in the dawn chorus and a breeze that lifted him off his feet. Feathers clung to his arms. He ran his fingers through their softness, and shivered into a smile.

As he jumped onto the windowsill, the sky cried out to him. He understood the movements of those wheeling shapes. His mismatched feathers could never compare with their beauty, but he could be among them.

He kicked off through the window and took flight. He glided in a giddy spiral over streets and fields, spinning toward the heavens.

In his dreams, this had been the moment when the world opened up to him, comprehensible at last from a bird’s eye view. The network of streets that bound his home to school, shops, and playground. The river’s route to the sea. The border between town and countryside, opposites that until now had blurred through hedges, verges, and paths. But streets were hidden by houses, the river by hills, and the town still oozed across blurred boundaries.

With swift strokes, Russ flew higher, determined to rise until the world became clear. But his arms were growing weary, the feathers that had buoyed him up becoming a burden. Their lightness was a lie, one more trick the world had set to confuse him. What had been weightless as the air was dragging him down, when he needed to soar.

He ripped out fistfuls of feathers. Black and white, stripped and speckled, they all tore free, mementoes of dreams crumpling between his fingers. He let the wind snatch them away, tumbling toward the ground.

The last feather out was the last one he had found. With it came his father’s shouts, his mother’s sobs, the slam of the door and the smell of petrol fumes. It felt weighty as a rock, but when he let it go, it drifted instead of plummeting.

With a lurching of his stomach, Russ realised that there was nothing left to hold him aloft, any more than to drag him down. He hung suspended, exhilarated and afraid, not knowing which would claim him, the earth or the sky. He squeezed his eyes tight shut and the wind rushed around him. Was he rising or falling? All he knew was that soon the world would make sense.

This story was inspired by a workshop on writing the uncanny with fairytales, run by Claire Dean as part of the Leeds Literary Festival. It was an excellent session, which I left with a brain full of bright, buzzing ideas, and with the first half of this story. Huge thanks to Claire, and to Dan Coxon, who made the uncanny strand of the festival happen.