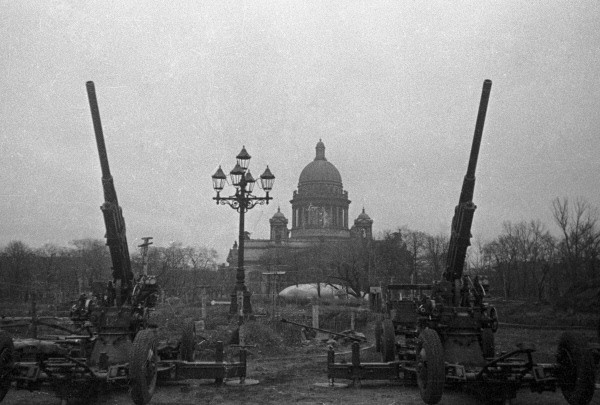 Stepan had survived. His street had survived. The bombs had stopped falling, the guns were a distant echo, the Germans had been driven back from Leningrad. There was food to be had again, not as much as before the war, but enough. Hitler’s thugs had come for Stepan and his city, but while the city wore its scars in shattered streets and empty apartments, he remained untouched.

He stepped out of his house and walked straight-backed toward the factory, as he had done throughout the siege, unflinching in the face of hunger and the mechanical screams of war. Eight hundred and seventy-two days, marked off in tiny chalk marks on his apartment wall. Today, he hadn’t had to open the drawer holding the chalk.

Like Stepan, his street had survived the siege untouched, but the moment he stepped past its end, he saw buildings scarred by bombs and shells, others entirely gone, gaps in streets like missing teeth in a boxer’s bloodied grin. He hurried past those buildings. Life was normal again, and he wouldn’t let the ruins steal that from him.

He paused at a junction, letting a convoy of tanks and bread trucks pass. The junction had been bombed early in the siege, its rubble only cleared away now to provide a way through. Something white peered at him out of that rubble. A human thigh bone.

Stepan frowned. No one needed to see a thing like that, especially now that the siege was over. Someone should take it to the graveyard for burial. But no one else was going near the bone, and Stepan needed to get to the factory. He had made it to work every day of the siege, he certainly wasn’t going to be late now. Perhaps he could hide the bone, so that stray dogs wouldn’t find it, and take it to the graveyard later.

He picked the bone up. It was rougher than he had expected, its surface repeatedly scarred by a blade. This person hadn’t just been killed, they had been butchered. Stepan had heard of such things, of course. There was even a rumour around the factory that Pavel, who had stopped turning up on day three hundred and five, had been arrested for corpse-eating. But none of it was real. It was the stuff of whispered conversations and fever dreams.

Trembling as if he himself had a fever, Stepan flung the bone away across the rubble. Someone else could find it and take it to the graveyard. The siege was over, he had survived, he wouldn’t face its filth any more.

The convoy was gone. He walked across the street, feeling the weight of the rubble and its hidden bones behind him every step. He moved faster, rushing along a street that was less scarred, one where he could look down and not see the past glaring at him from shattered windows and fallen roofs.

There were more bones in the gutter. He looked away before he could see what they were, human or animal, blank or bearing butchers’ scars. Then his boot hit a broken flagstone. He tripped, stumbled, sprawled in the gutter, bones inches from his face. He rolled over and scrambled back across the pavement until his back pressed against a wall. He closed his eyes tight shut and sat taking deep breaths, trying to slow his racing heart. It was over. He was alive. The city was safe.

He pressed his hands against his belly. His thumbs brushed his ribs. Once, he had been round, so round that his sister had called him a ball. Now he could feel his rib bones through his skin, just like he felt the hunger, a gnawing pain for eight hundred and seventy-two days.

He had to get up and go to the factory. He had held himself together all through the siege, while others had broken down, become criminals or cannibals, wept or screamed or retreated into silence. If he could stand strong through that, there was no excuse for breaking now, when it was over, when the guns were silent and the food was coming, when he didn’t need to watch in case some desperate soul tried to steal his ration card.

A hand settled on his shoulder. He forced himself to open his eyes, focused on the old lady looking down at him instead of the broken buildings beyond her.

“It’s over,” he croaked, willing the words to be true. But they weren’t. Not for him, and not for the city. The bombs had stopped falling, but their echoes remained.

Today’s story was written to go with a new comic I’ve got out this week. Survive Leningrad! from Commando Comics is about a military doctor trying to save lives during one of the most brutal sieges in history, and about the shotgun-wielding granny who helps him out. You can find it in newsagents, through Comixology, and as part of a bundle of comics through the DC Thomson store. If you enjoy war stories with an unusual focus then this one’s for you.