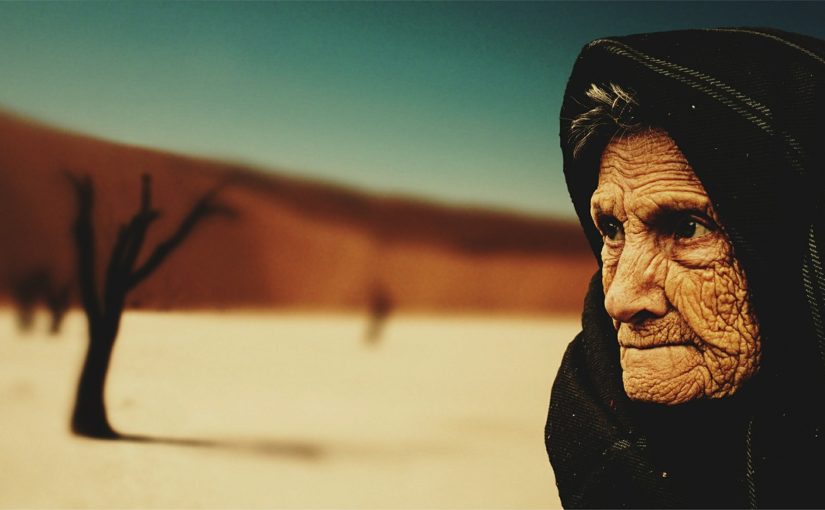 The land had grown hard and dry, nothing stirring but dust in the wind. The only place where nature held was in the waste heap outside the village, where beetles and worms ate what people could not. Oxen stood gaunt at idle ploughs while seeds lay lifeless in the soil.

And so Cobark gathered her people and led them into the desert, carrying all that they needed to start again – their clothes, their tools, their blankets, and the last of their food.

They walked north for five days, into an ever fresher wind. The air became cool and damp and their flagging spirits rose.

They reached the coast and looked out across a salt sea that shimmered with the sheen of black oil. Nothing could live here except the birds that fed on rotting fish, and the people could walk no further.

So Cobark led them east, across the desert once more. They walked for five days, their steps growing slower and more weary, until they reached a city from the days before the flattening.

In its ruins they found metal boxes with no opening, and when they broke into them some held precious food. But the first to eat from them became sick and twitched with a terrible fever. As they struggled to save him, monsters emerged from the city, some walking on two legs and some on four, all hungry for the people’s flesh. They fought them off and ran south, with the oxen in a long trail behind them.

After five days, with mountains rising to the east, they came to a canyon. It was as though a giant had taken an axe to the ground, leaving a deep gash where the earth had been. Desperate as they were, they could not cross it, nor could they climb the mountains.

And so, with a weary heart, Cobark pointed west. She let the others walk before her, for she was no leader any more. She had brought them forth and all they had found was misery, different places to die from hunger. She took the rear of the travelling column, and whenever someone fell she would lift them up and carry them until they had the strength to go on. When more fell than she could carry, she laid them on the backs of the oxen or made stretchers on which they could be dragged. Soon, half the people were taking the weight of the other half as they processed home to die.

In this way, it took them ten days to come back to the village. Most returned to their huts to wait for the end. But Cobark felt her failure. She did not deserve such comfort. So she walked out of the village and went to die by the waste heap, where she knew she belonged.

There she saw life. Seeds sprouting from the rotten pieces that people had thrown away. Cobark found hope, for herself and for her village.

She cracked open the hard soil and dug in the rotting waste. Within days the seeds, which had seemed set to lie dormant forever, began to sprout. The people rejoiced. Cobark returned smiling to her home.

And every year after, at the time of planting, they went to offer thanks at the shrine that was the waste heap.