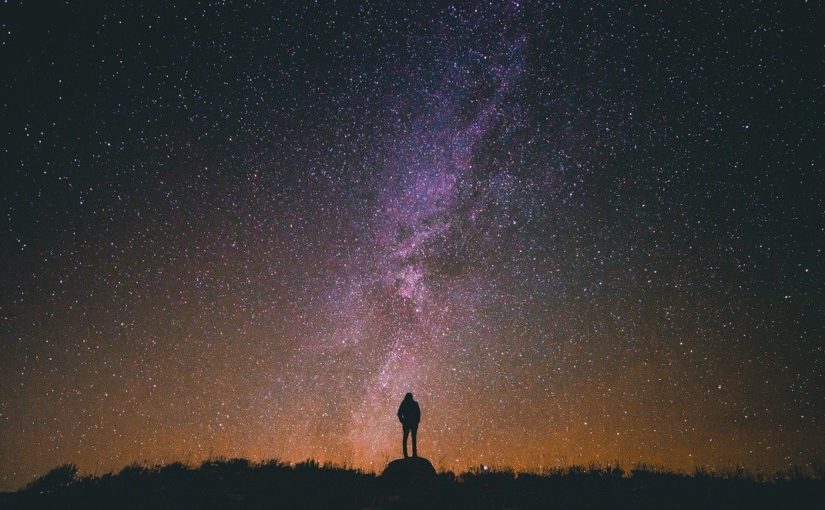 I love nights like this, when the air is clear and you can see the stars scattered across the sky. If you look hard, you can almost see all the way back to Earth. That’s where we were born, your grandma and I. It’s where we all came from, the first people on this planet.

You see that star over there, in the Great Ship constellation? That’s the one we call George. Doesn’t sound like much of a name for a star, does it? But there’s a reason we gave that name to the brightest star. Do you want to hear it?

Of course you do.

OK, so George was the co-pilot on the Endless Voyage – that’s the ship the Great Ship is named after, the one that brought us here from Earth. He wasn’t a great guy. He was brooding and surly, didn’t like spending time around people, could never let anyone else have the last word. If I’m honest, none of us really liked him, but he was a gifted engineer as well as a pilot, and that got him a place on board.

George wasn’t on duty when the meteor hit. Captain Vance had the honour of piloting our final flight into orbit, and I think George was pissed off that Vance had pulled rank. While the rest of us were watching our new home appear in the view screen, celebrating the fact that we’d made it at last, old George was sulking in his cabin.

Except that it turned out we were celebrating too soon. There was a crash and the Endless Voyage shook like mad. I tried to call Vance over the intercom, but there was no response. Then I saw the debris we were trailing. The bridge had been destroyed.

The controls were gone, the captain gone. We were hurtling towards landfall with our nose smashed open and the ship tearing itself apart. Bad as things were back on Earth, this was the most terrified I’d ever been.

Then George’s voice came over the coms. He told us that he’d jury rigged a control system from his cabin. He was bringing us in but he needed us to listen.

It was the first time we’d ever been glad to listen to George. Half the escape pods had been trashed along with the bridge, so he sent the kids and parents to the ones that were still intact. The rest of us were sent to the cargo pods and told to strap ourselves in.

I was one of the last into the pods. Standing in the doorway, I could feel the ship shift around me. I looked out and realised that George was turning us around, pointing our unbroken rear towards the planet.

I got him on coms, my voice still shrill with panic, and asked if we could even make atmosphere like this.

“Better than we can with our torn front end first,” he said. “Now get in that damn pod and lock the door.”

I did like he said and strapped myself down on a big heap of bags full of seeds. The ship was shaking, the whole frame screaming as it tore itself apart. People were praying, crying, holding each other tight.

I looked up at the ceiling and promised that if we got through this I was buying George a drink. I would put up with his nonsense for as long as he wanted, I was that grateful for him giving us a chance.

We were into the upper atmosphere by then. The air was getting hot. The shaking was so bad I chipped three teeth and my mouth was full of blood.

Then George’s voice came over the coms.

There was a thump and my cargo pod stopped shaking. Gravity took hold as we fell straight towards the planet, hurtling ever faster towards death.

Then I was jerked back in my straps. The parachutes for landing cargo had kicked in.

Those tears and prayers turned to whoops of joy. We were going to make it.

I got on the coms to tell George that we all owed him a drink, but there was no response. Then I remembered, he’d been controlling the ship from his cabin. George, the surly swine who no-one liked, had stayed behind so that we could live. He’d died to save us.

When I landed and got out of the pod, I could see pieces of the ship burning up across the sky. I cried at the thought that one of those pieces was George.

That’s why I come out here on clear nights. I look up at the star we named for him and I offer up a drink.

I’ll be gone soon. Ninety years feels all too short when you’re leaving behind the people you love, but it would have been a lot shorter without George. So I want you to come out here once I’m gone, look up at that sky on clear nights, and raise a glass to George, because we’re going to owe him a drink forever.