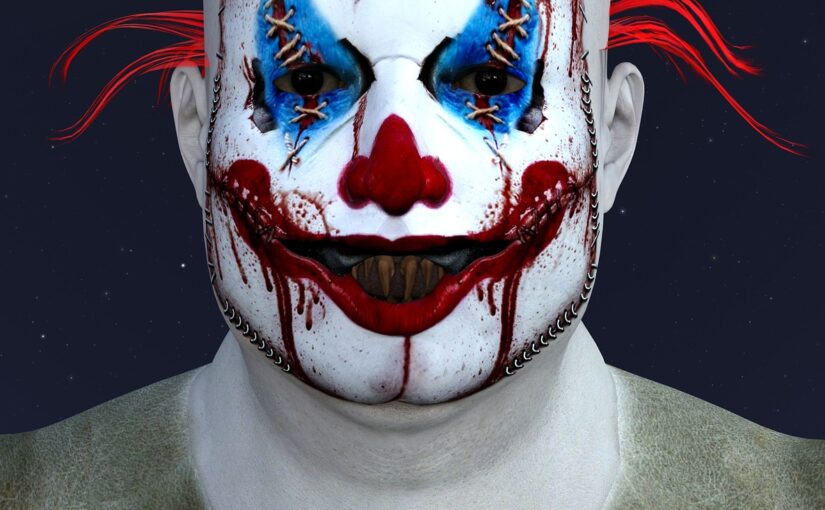 Rich found himself sitting on a wooden bench in the back of a circus tent. He couldn’t remember why they’d decided to come but it was probably Jen’s idea. She loved a good spectacle and there was plenty here. The fire breather illuminating the entrance; the juggler tossing chainsaws; the acrobats spinning like sequined nebulae overhead. The elephants and bears were a surprise, Rich thought that modern circuses had given that up, but there was something amazing about seeing a lion open its jaws wide.

The show began. The ringmaster swept his top hat down in a bow, blood red tailcoat swirling, then waggled his eyebrows. Eyes like bottomless pits stared right at Rich, who swallowed. How could a face look so expressive and so empty at once?

“Ladies and gentlemen.” The ringmaster’s smile bared skull white teeth. “Thank you again for joining us. It’s going to be a night you’ll never forget.”

Rich glanced around. Where had Jen got to? She was going to miss out. Perhaps she was buying refreshments. She always bought sweets at the cinema, why not at the circus?

“I need a volunteer from the audience,” he said. “How about you, miss?”

A young woman stepped up and lay down on a table. A box closed over her, with only her head and feet protruding. The magician produced a saw and started cutting. The audience laughed politely at familiar jokes while the saw scraped lower.

The woman screamed. Her head and feet spasmed. Rich stared, fascinated. It had to be a trick, a plant from the audience and a bag of red water. Part of him wanted it to be real, an awful mistake making a real night to remember, but then the magician wouldn’t be grinning, would he?

The audience stopped laughing, then started again, and Rich joined in, the tension snapping like an over-strained thread. The woman went limp and they laughed louder; they were in on the joke, weren’t they?

Clowns pushed the magician and his trick to one side. The ringmaster stepped forward.

“Don’t worry, we’ll be seeing them again later,” he said with a wink.

A knife thrower emerged, her bare arms covered with jagged tattoos. A knife spun gleaming through the air.

“I need a volunteer from the audience,” she said. “How about you, sir?”

The clowns strapped a man in an old-fashioned suit onto a vertical disk, a wooden target with splintered gouges where the knives had struck. The knife thrower pulled on a blindfold, tossed a blade through the air, caught it perfectly between her fingertips. The ringmaster spun the wheel and the man in the suit turned.

The knife thrower drew back her arm. The audience took a collective breath. A blade twisted end over end through the air and buried itself in the man’s chest.

Rich gasped, fixated on that spinning body and the pattern of blood on the floor. Then the ringmaster laughed, the audience laughed, and Rich was swept into the sound. Of course, it was that sort of circus. They would reveal the trick in the end. For now, clowns pushed the spinning board to one side.

A fire breather, head and chest shaved and gleaming, stepped into the ring with a burning brand in one hand and a bottle in the other.

“I need a volunteer from the audience,” he said, and looked Rich in the eye. “How about you?”

Rich scrambled eagerly across the seats and into the ring, let himself be tied to a post by the clowns. He’d never known that fire breathers needed volunteers. He wondered what the trick was. But even as he wondered, he glanced around, trying to glimpse the sawn woman and stabbed man, wondering in spite of everything if he might see a corpse.

Past the magician’s box, he saw Jen sitting in the audience. He wanted to wave, but his hands were tied. She had a bag of sweets. There were flecks of dark foam at the corners of her pale blue lips.

Ice ran through Rich’s veins as he watched her place another boiled sweet in her mouth, moving with terrible, stiff precision.

He looked across the rest of the crowd. Next to Jen was the magician’s volunteer, her guts pooled in her lap. Beyond her was the man in the old-fashioned suit, knife still protruding from his chest. The woman behind him looked like her head had been mauled by a lion, and flanking her were a couple with twisted, broken limbs.

Rich realised, with terrible certainty, that he had seen this before.

The fire breather took a swig from his bottle and held up the burning brand. His eyes glinted red.

Rich screamed as the inferno engulfed him. Through crackling flames, he heard the crowd laugh. Time stretched out in bright agony, until at last there was the sweet relief of oblivion.

Rich woke to find himself sitting on a wooden bench in the back of a circus tent. He couldn’t remember why they’d decided to come here. It was probably Jen’s idea.

The ringmaster swept his top hat down in a bow, blood red tailcoat swirling, then looked up and waggled his eyebrows.

“Ladies and gentlemen,” he called out. “Thank you for joining us again. It’s going to be a night you’ll never forget.”

A few days early with this month’s flash fiction, but it seemed a shame not to get this one out in time for Halloween. It’s not my usual thing, but I do like to dip a toe in the darkness around this time of year.