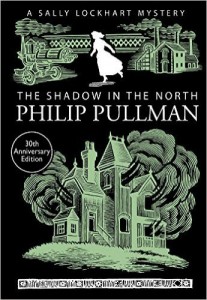 Wherever you stand on feminism, it’s hard to argue with the fact that there’s greater gender equality now than throughout most of history, or at least European and British history. The raising of VAT on tampons might be a retrograde step, but women have more rights to economic and political self-determination than they did in the Victorian era.

That doesn’t mean should ignore the inequalities of the past, and for me it’s a great day when I find one of my favourite authors tackling that history.

I mostly know Philip Pullman’s work through the extraordinary His Dark Materials trilogy, a defiantly anti-establishment and unusual fantasy series that tackles ideas of religious authority and what it means to be human. It’s an amazing series that proves YA fantasy can be deep, smart and beautifully written.

I haven’t read all of his Sally Lockhart books – historical fiction set in Victorian England – but I recently re-read the second one, The Shadow in the North, and was struck by how this book draws attention to inequality while challenging it.

Sally Lockhart is a woman in her early twenties, in an era when the young were expected to respect their elders and women were meant to stay in the kitchen, or if they were wealthy then to stay in the parlour looking dainty. Sally isn’t like that. She is a one woman financial consultancy company, with a sideline in criminal investigation. She refuses to be bowed by the pressures of gender expectation, while recognising when she has to work with them. Her social circumstances affect her, as anyone’s circumstances affect them, but she doesn’t let them define her life. And when she stumbles upon a conspiracy that has left one of her clients a pauper, she doesn’t let the gender, rank or wealth of her opponents stand in the way of justice.

Like many fantasy fans who self-identify as feminist, I like to see writers create worlds in which no-one is limited by gender. Those allow female role models who aren’t restricted by the fifty-fifty split of which genitals they’re born with, and who I can proudly hold up as inspiring role models to my nieces.

But that doesn’t mean I want every setting I read to be one of equality. We don’t have that equality in the real world, and the inspiration a character provides, as well as the interest of their story, can come as much from challenging gender expectations as not having to live with them.

This isn’t to say that I love this book purely for Sally Lockhart. It’s an exciting story with a great cast of characters, male and female. You don’t have to have read the first book for it to make sense, though I imagine that adds to its richness. Pullman’s prose is clear and engaging.

If you haven’t read any Philip Pullman already, then I strongly recommend that you go read His Dark Materials. But if you have, or you prefer historical fiction to fantasy, then The Shadow in the North is well worth your time.