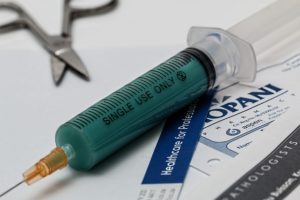 Sarah sat back in her armchair, eyes closed. She turned an old zippo lighter over in her hand, its familiar shape a comforting distraction.

“You shouldn’t smoke,” the nurse from AlderCon said as he rolled up Sarah’s sleeve. “You’re never too old to get lung cancer.”

“I quit decades ago,” Sarah said. “I keep this around to remember why.”

Sarah nodded, eyes shut tight. The needle wasn’t big but she still flinched as it pricked her arm. She squeezed the lighter and forced herself to sit still.

She trusted AlderCon and their staff. Thanks to their security division, there were no more teen gangs roaming the city’s streets. And thanks to their treatment, she’d barely aged since she hit fifty. These injections were adding decades to her lifespan.

Still, she couldn’t bring herself to watch the needle going in.

“How does it work?” she asked, as the nurse put the syringe away.

“It’s complicated,” he said. “I wouldn’t worry about it.”

“I was a research chemist for forty years. I think I’ll understand.”

The nurse blushed and looked away. “Alright, you’ve got me. I don’t know how it works.”

“Not even how it’s made? Your office is on the same site as the factory.”

The nurse glanced around, then leaned in close and lowered his voice.

Sarah squeezed the lighter again. As a student, she’d campaigned against child labour in China. Was this young man saying that it was now on her doorstep? Or was he just making up wild stories to impress clients?

If there was one thing she’d learnt in her career, it was that you had to have evidence before you tackled a problem.

“Thank you,” she said, rolling her sleeve back down. “Same time next month?”

The electronic lock on the factory door clicked open, letting Sarah slide inside. In her forties she’d dated a corporate spy, a wild-eyed Australian by the name of Shona. It hadn’t ended well, but she’d learnt a lot along the way, including techniques for tackling security systems. Given the ache in her hip, avoiding the guards had been tricker than getting through the doors.

She crept along the corridor, past offices and storerooms, towards the main processing plant. The factory kept working at night but its clerical staff didn’t, making this the easiest way in.

She’d brought a better camera than the one on her phone. Hopefully she wouldn’t need it. She’d just find young people on apprenticeship schemes, making pharmaceuticals instead of hanging out on street corners. But if she saw school age children, or if conditions here weren’t good, then she would want leverage to make the company improve. Life was long and she didn’t want to spend it carrying around a weight of guilt.

The next lock was easier, as internal security measures often were. She opened the door just enough to slide through into the shadows at the edge of the factory floor.

She froze, one hand still holding the door.

There were young people here alright. Hundreds of them, sitting in orange boiler suits on plastic chairs. Many were in their late teens, while some were too small and smooth-faced to be more than twelve years old. All were strapped into their seats, staring glassy-eyed into the distance. Plastic tubes ran from strange machines to the needles in the young people’s arms.

Sarah slid her hand into her pocket and squeezed the familiar shape of her lighter.

“What I don’t get is why you burned the place down,” the detective said, looking across the desk at Sarah. Beside him, a light blinked on the police station’s digital recorder. “I mean, that’s where you get your drugs from, right? Other people in your neighbourhood too. Are you so sick that you want to hurt your own community?”

“My client has not admitted to any act of arson,” Sarah’s lawyer said for the third time.

“She was found watching the place burn, holding a lighter and a bottle of home-made accelerant.” The detective shook his head. “How stupid do you think we are?”

“Surely AlderCon’s security tapes will show you what happened inside the factory?” the lawyer said.

The detective frowned. His partner snorted.

“Perhaps they’re just incompetent,” the lawyer replied. “They did just misplace a hundred young offenders from one of their secure facilities,”

“They told me to ask you about that too.” The detective gave Sarah a puzzled look. “Any idea why?”

Sarah shifted in her seat. The ache in her hip was growing. It would only get worse without her injections, as would the other symptoms of age. The next few years would be cruel ones.

She squeezed her hand tight, but there was no lighter there. Just the memory of how it felt, and of a flame bursting from it for the first time in years, blazing in the shadows of the factory.

“I have an old friend who’s a journalist,” she said. “Watch the news tomorrow and I think you’ll find some answers.”

The detectives looked at each other, then back at her.

“What are you on about?” one asked.

“These days, I never really know,” Sarah said, smiling and tapping the side of her head. “Age is taking its toll.”

I don’t remember exactly where this idea came from. I found it in an old notebook, among various scribblings from last year. I think it might have been influenced by a body horror piece by Steve Toase, about people being used by medical business. Judging by the orange boiler suits, I also had Misfits on my mind, but then I often do.

If you enjoyed this story then please share it with other people – there are social media links below. And if you’d like to receive free stories straight to your inbox every week, consider signing up to my mailing list.