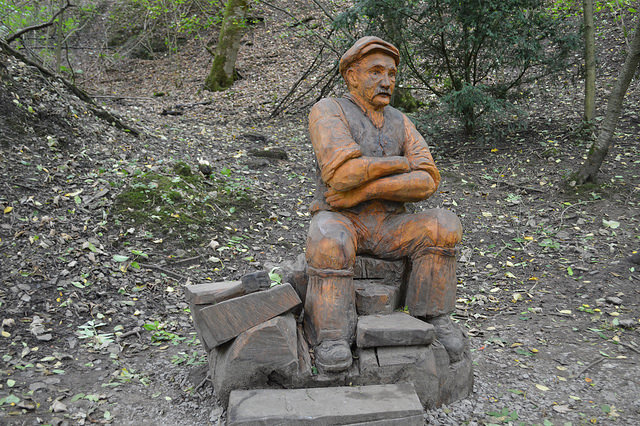 Alf pulled on his overalls, thick with coal dust, and made for the door. At the table of their tiny kitchen, Maude was playing with a pile of wooden gears and levers.

“Look what I made, papa!” Dangling her improvised device from a wooden spoon, Maude held it above the fire. Steam from the kettle made wheels spin, setting off a series of movements Alf didn’t understand.

He gritted his teeth and forced a smile. He could endure the machines for his daughter’s sake. They brought out something in her, an excitement he had never felt in his youth.

New machines towered over Alf as he approached the entrance to the pit. Brass pistons gleaned despite the overcast sky. Next to them, engineers in smartly cut overalls were assembling a massive steam turbine.

Alf had known that this day was coming. He’d heard what happened when Gadlington Steam Mines took over a works. First came the mechanical lessons in the schools, an innocent way for the company to create the workers it needed. Then came the machines that made work more efficient, like the new drill they’d installed over winter. Then they didn’t need to replace men as they retired or were lost in accidents. And then…

“We’ll be keeping you all on for another month,” Bill Shaw, the foreman, stood on the steps outside his office, addressing the assembled miners. “While we bed in the machines and you find other work. After that-”

“What other work?” Alf shouted. “There’s nothing here but the pit!”

“Not for all of us,” someone else shouted.

“Then the factories in town can-”

“Our families are here, not in town!”

Alf cheered his agreement along with the rest.

They were going to fight for what was theirs.

Theresa Gadlington wore an impeccable suit and an immobile expression. Facing her across the table, Alf felt as though he was talking to a statue, not a human being.

Beside him, the other members of the strike committee growled their agreement.

“We have indulged you for two weeks,” Gadlington said. “Let you vent your frustrations. Now we need you to get out of the way so the engineers can set up the machines.”

“Not until you save our jobs,” Alf said, leaning back in his chair.

“No.” Gadlington’s voice was cold.

“You don’t get to say no,” Alf said. “Sure, your security men are keeping us away form the machines. But we’re keeping your engineers and supplies from getting to the site. So until we get what we want, you don’t get what you want.”

“I do not intend to give. I intend to take.” Gadlington drew a sheet of paper form her pocket. On it was a list of names. “You all have children in the school we fund. They are learning engineering and construction, skills which will provide well-paid employment in the modern age. Their future lies far beyond the limits of this ugly pit village.

“Unless I take that away.”

With a swift movement, she tore the paper in half. Alf felt as though that sheet of paper had been his own heart.

Alf took off his overalls, thick with coal dust, and abandoned them by the door. Wearing only his long johns, he sat in a chair by the fire.

“Papa?” Maude laid a hand on his shoulder. “Are you alright?”

Alf shook his head, staring dejectedly into the flames.

Behind her, pieces of practice machinery lay scattered across the table.

“Can you teach me to make machines?” Alf asked, pointing at the pieces. “I know I’m not a fast learner, but I’ve got time now. Maybe one day I can work on machines for the company with you.”

“Oh, papa.” Maude laughed, a gleam in her eyes. “I’m not going to work on company machines. I’m going to make something better. And one day, I’m going to take away their jobs, like they took yours.”

She kissed him on the forehead. For a moment he sat stunned, seeing the bold young woman his daughter had become. Then he leaned back in his chair.

“Maybe I can still work on those machines with you,” he said.