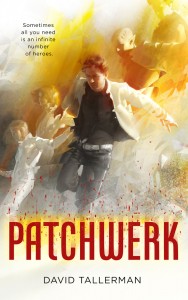 David Tallerman is an author of science fiction, fantasy and many other things. I’ve written previously about his books Giant Thief and Patchwerk. Over the past couple of years we’ve become friends, mostly through the shared bond of convention bars. So with several new books from him in the offing, I abused my position to get an interview.

And here it is…

AK: Let’s start with the obvious question – tell us about your latest book.

DT: Actually, it’s more books at this point! January saw the release of my Tor.com novella Patchwerk and, if all goes well, February should bring my fully-illustrated collection of horror and dark fantasy short fiction The Sign in the Moonlight and Other Stories.

But going back to Patchwerk, it’s the story of a scientist named Dran Florrian whose solution to the many problems of the near-future world he inhabits has been to create a machine called Palimpsest that’s capable of repairing his own reality by patching in elements copied from others. Dran, being the sort of overly-focused individual who would build a thing like that without fully thinking through all the implications, is just now waking up to the fact that he’s created something of apocalyptic power in the wrong hands, and has decided to smuggle himself and Palimpsest to somewhere safer. The only problem is that he’s already too late, and when an attempt to steal it leaves Palimpsest damaged, Dran begins to discover just what his creation is capable of.

The idea was very much to write a kind of high-concept action movie, the sort of thing that would only really work in a novella format. And Patchwerk is also a love story of a sort, though one set after the actual love story is over. That seems to be the aspect that’s getting the least attention in reviews, but it’s perhaps my favourite part.

– You write in a wide range of genres – fantasy, science fiction, horror, crime – and a range of formats – novels, comics, novellas, short stories. For you as a writer, what’s the advantage of doing so many different things rather than focusing on one?

In many ways, I think it’s proved more of a liability; I suspect that I’d have had more success by now if I’d stuck to one or even two genres. Still, I hope there are a few people out there who are excited by the notion of a picking up a book by a writer knowing that at the very least it will be completely different to what they’ve read before from that person.

Whatever the case, I’m convinced that I’m a better writer for it. Every new thing you try teaches you something that’s applicable elsewhere and helps to keep your ideas fresh. I’d hate to ever feel like I was repeating myself, and if that means I tend to over-steer the other way then I guess it’s a price I’m happy to pay. But mainly I do it because it’s fun and it keeps me interested, and I suppose because I want to get to play with all of the writer toys.

– Your novella Patchwerk deals with alternate realities and the desire to change them. If you could step into an alternate reality of your choice, how would it be different from our own?

I think that one of the inevitable morals of this kind of story is that we live in the best of all and the worst of all possible worlds, and your only option as an individual is to do whatever you can to make it more the former than the latter. Having said that, I wouldn’t turn my nose up at any reality where I got Crouching Tiger style Wushu flying powers. I mean, that would be pretty cool. 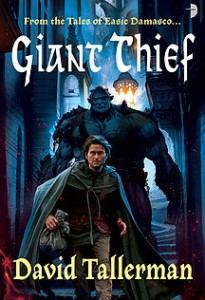 – Easie Damasco, the hero of your Thief novels, is a selfish loner reluctantly pushed into doing good deeds. We shouldn’t like him, and yet we do. Why did you choose a protagonist so inherently hard to like? How did you make that work? And what foul deeds did you commit to get into his mindset?

I don’t know that I chose Easie as such, he just kind of came along. Because Giant Thief was my first proper novel, it never occurred to me that it might be problematic to have a protagonist who was basically pretty obnoxious and by no definition a good person. Easie was a bad guy because the setup I had called for a bad guy, and I suppose I figured that because he was funny – at any rate, because I found him funny – it wouldn’t be much of an issue.

The thing is, to me, Easie is a fairly realistic character, within the bounds of the kind of story that Giant Thief is; he’s not some cartoonish rogue, he really is a criminal and he’s led the life of a criminal, so of course he doesn’t simply begin doing the right thing at the first opportunity. He has his good side, he’s capable of kindness – he treats animals, as a rule, better than he does people – and he even has a kind of lopsided sense of right and wrong. Again, I suppose I just hoped that those qualities might be enough to allow readers to turn a blind eye to some of his less savoury behaviour!

As for any likeness between him and me, the most we have in common is a propensity to talk to horses. I can honestly say that I’ve never once stolen a giant, a crown or even a prince.

– Other than your own books, what have you really enjoyed reading recently?

That implies that I sit around all day reading my own books! Whereas in fact I tend to wait for the audio book to come out.

I’m just right now getting to the end of Adrian Tchaikovsky’s ten book Shadows of the Apt epic fantasy / sci-fi series, and it’s been a hell of a ride. I normally avoid doorstopper books due to limited time, but once I finished the first I just didn’t want to stop. I also went back and reread The War of the Worlds for research on a short story and it was a reminder of just what an incredible, ahead of its time book it is. To anyone who hasn’t read it, or whose memories have been muddied by the films, I’d recommend coming to it with fresh eyes, it’s a true masterpiece.

– As your blog shows, you’re passionate about anime. What’s special about the genre that appeals to you? And if someone doesn’t watch anime why should they try it?

Well, you know, we’re talking about a vast body of work here and what’s visible in the West, especially here in the UK, is only the tip of the iceberg. It sounds like nitpicking but its actually a crucial point: anime is a medium and not a genre. So in that sense to say “what’s the appeal of anime” is a little like saying “what’s the appeal of film” or “what’s the appeal of books.” If you enjoy art or entertainment then there will absolutely definitely be something in the world of anime that will appeal to you, and it’s easier than ever these days to track down something that fits your tastes. Certainly if you’re into just about any subgenre of fantasy or science-fiction then you’re doing yourself a huge disserve not to.

For me personally, though, I would say that, firstly, I love animation; I love the artistry of it and, although I like Western animation too, there’s the obvious fact that it’s been dominated by a company that gears their work predominantly towards children for the better part of a century. On top of that, anime tends to handle genres that I like, fantasy, horror and sci-fi, in a manner that’s more thematically diverse and, at its best, more sophisticated than what tends to come out of Western film and television. I suppose the relative lack of budgetary constraints is a big part of that: even if you had the impetus to make something like the Ghost in the Shell TV series, that kind of smart, adult-focused science fiction, the costs would be prohibitive. But for whatever reason, I think that the best anime tends to be a little more daring in its story-telling and the kind of places it’s willing to go to.

Oh, and in the spirit of absolute honesty, I’ve come to realise that I’m kind of a sucker for J-pop.

– Who would win in a fight – Isaac Asimov or J R R Tolkien?

Are they armed? What’s the field of combat? Are they in the back of a moving vehicle? Has Asimov had any opportunity to slip nerve toxin into Tolkien’s tankard of ale? Did they bring their writing possies?

But actually, none of that matters. The correct answer is Isaac Asimov.

– Where can people find you on the internet? And what terrible things will befall them there?

I am in many places on the internet, but a good place to start would probably be my website at www.davidtallerman.co.uk. There’s nothing terrible there at all, it’s a place of innocence, beauty and quietude. Kind of like a Zen garden, if Zen gardens were full of people ranting lengthily about anime.