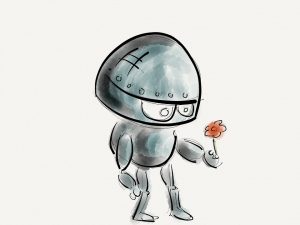 In the year since Platinum Guard Droid number 73X-9Y4 had last been activated, two things had changed in the life of the ambassador he guarded. Firstly, a rise in international tensions, leading to both today’s meeting and the activation of 73X. Secondly, the ambassador and his wife had acquired a small hairless human, less than a foot tall and incapable of independent mobility.

“What do you mean, I can’t bring the baby in?” the ambassador said to the woman outside the conference room.

“I mean you can’t bring her in,” the woman replied. “Was something unclear?”

“Her mother’s out of town and the nanny’s sick,” the ambassador said. “Why can’t I just bring her in?”

“Protocols are very clear,” the woman said. “Extremely sensitive information is being shared. Only the listed parties can attend.”

“She’s a baby!” the ambassador said. “What’s she going to do, memorise missile codes?”

“I’m sorry.” The woman shook her head. “In times likes these, I can’t make exceptions.”

There was a pause.

“Fine.” The ambassador held the tiny human out towards 73X. “I’m making this as quick as I can. Guard her with your life.”

“I have no life,” 73X said, taking the creature in the rubber grips of his steel hands.

“Me neither right now.” The ambassador rubbed his eyes. “Just guard her as well as you can, OK?”

The ambassador and the woman disappeared through the doors, which sealed shut behind them.

Alone in the corridor, 73X stared at the tiny human in his hands. It wriggled, opened its mouth, and started to emit a warbling noise. The sound appeared to be an alarm. Given the lack of external stimuli, 73X concluded that the human had developed a fault.

Placing it on the floor, he unwrapped the cotton packaging that surrounded its body. One of the lower layers of packaging was damp. Clearly the human had developed a leak.

73X took a cloth from the maintenance compartment in his leg and wiped away a mixture of solids and fluids. Taking out a tube of solvent, he looked for a gap to seal. He could see several, but didn’t know which was the break and which served functions. Fortunately, the leak seemed to have stopped, and so he put away the sealant.

73X knew nothing about the repair and maintenance of humans of any size. That was normally left to medical drones. The best he could do was running through standard diagnostic and self-repair options.

Low in the human’s main body mass was a small, round depression, the only thing that looked anything like a power button. 73X inserted a finger and pressed, hoping to switch it off and back on again.

Holding up the human and turning it in his hands, 73X used his full range of senses to look for broken components. Visuals, audio, sonar, infra-red, tactile testing – nothing revealed an obvious fault.

The alarm continued. The subroutine that pushed 73X against accepting failure was by now prodding ceaselessly against his consciousness. It was a state his manual compared with the human experience of “extreme annoyance”.

The tiny human did not have thousands of fine loose wires on its head as the ambassador did, but there were a few. Wondering if one had become detached from a vital connection, 73X scanned the head for anywhere he could plug them in.

All else having failed, he fell back on the one fault any device could develop, and the one he seemed least equipped to fix – perhaps it was out of fuel.

He had seen humans use their fuel intake, and was confident of where it could be found. But he had no spare fuel to give it. Looking around, he scanned the corridor for anything approximating human fuel. Some sort of vegetable or animal matter, preferably in a cup, bowl or plate.

On a stand by the doorway, sticks taken from plants protruded from a vessel of water. Some had leaves, and all had flowering heads. Plucking one out, 73X pressed its soft petals into the human’s fuel intake valve.

For a moment, the fuel intake made small motions against the plant. Silence fell and 73X thought that he had succeeded.

Then the human’s alarm sounded again, louder than ever.

There were no other potential fuel sources by the door, no more applicable options in the self-repair manual. 73X could not depart while the ambassador was not with him, and no-one had come at the sound of the alarm.

Perhaps if the unit was faulty the ambassador could return it. For that, the tiny human would need to be in its packaging. As the punishment subroutine pounded in his processors, 73X re-wrapped the human, leaving out the wrappings dampened by the leak. Then he held it protectively against his body, next to the warm spot in which his reactor lay. He had failed to fix the problem, but could at least protect the broken product between now and its return.

In the faint hope of shaking something loose, but aware that delicate instruments could break under swift movement, he rocked the human back and forth.

The alarm faded, was replaced by a gurgling noise and then silence. Had the human completely ceased to function?

73X swiftly scanned it. The unit appeared to still be active, yet the alarm was silent. Somehow he had fixed the fault.

The failure subroutine ceased its punishment, and 73X enjoyed a moment of restful silence.

The doors opened and the ambassador emerged.

“Thank goodness that’s over,” he said. “Hey, you got her to sleep – you should babysit more often!”

This isn’t the first time I’ve written science fiction about robots struggling to understand humans. If you’d like to read something else on this theme, check out the story ‘Digits’ in Lies We Will Tell Ourselves, my collection of sci-fi stories. Here are some comments from people who’ve reviewed the collection:

‘A collection of bite-size short stories ranging from heart-wrenching, through thought-provoking, to mildly disturbing. This book is a bit like a box of high-quality and experimental chocolates; you don’t know what you’re going to get when you start, you can’t even be completely sure you’ll like it, but you can be certain you’ll be impressed.’

‘The real strength of this collection is not necessarily the stories themselves, although each stands up well on their own, but the sheer breadth of imagination on display’