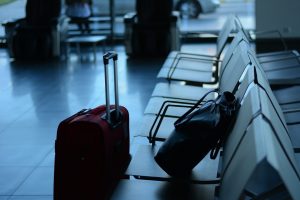 I sat at a bar in Herrje’s largest spaceport, watching people while I waited for my flight. They came from a hundred different planets, divided skin colour, language, and number of limbs, but united in the experience of travel. Getting flustered and lost, impatient about baggage, bumping and jostling each other. Seeing the impatient ones suffer through their own foul tempers was immensely satisfying.

And yes, I’ll admit it, I also enjoyed watching a touching reunion or too.

I was onto my second beer when the highlight of my morning came stomping out of the crowd, his ridiculous old-fashioned tie swinging as he jerked his big red face from side to side. Warren was the security officer at the embassy, a man who had ruined several of my press conferences by going off script. Seeing the humourless sod in this state was the perfect start to my holiday.

Then he caught sight of me. A look of relief crossed his face as he hurried over.

“Atticus!” he exclaimed, leaning in close so that he could whisper. “Thank God you’re here. I need help.”

“Sorry,” I said, pointing up at the departures board. “My flight’s just been announced.”

I rose from my stool, picked up my bag, and tried to slip past him. But he caught my wrist with a grip that could have turned bricks to dust.

“I’m couriering sensitive documents for the ambassador,” he hissed. “The bag’s gone missing. You have to help.”

“Can’t,” I said, trying to pry his fingers loose. “I might miss my flight.”

“Fine.” Warren glared daggers at me. “If you won’t help then I’ll ask someone else.” He raised his voice. “Security!”

A blue-skinned creature with six legs rushed over. Vestigial wings protruded from the back of its black uniform and a pair of clear goggles covered its bulbous eyes.

“How can I help?” it asked, the words crudely translated by a device on its collar.

Warren pulled out an ID card and presented it for the security guard to scan.

“I’m the head of security at the British Embassy,” he said. “There’s been a theft. I need you to lock down this part of the spaceport.”

I caught a glimpse of data scrolling down the inside of the goggles. The guard said something into a microphone then stood listening to the response.

“As you wish, Mister Warren,” it said, handing back the card.

Suddenly, doors hissed closed and messages flashed up on screens around the spaceport. A vast collective groan emerged from the crowds.

This time I couldn’t appreciate their displeasure. I was feeling it myself.

“You could have helped,” he said.

Warren pulled out his pocket computer and showed us a picture of the bag – a small blue satchel, inconspicuous looking but woven from near-impregnable fibres and with a genetically coded lock. Then we split up and began roaming the concourse.

The minute I saw the jouran in the red jumpsuit, I knew that her bag was ours. She was holding herself too stiffly for an invertebrate, the suckers on her tentacles clutching the strap too tight.

The jouran turned and ran off through the crowd. Warren and I were in hot pursuit, while behind us the security guard got on his radio.

We ran the length of the hall and up a flight of stairs, barging people aside. At the end, a pair of glass doors swung open. Apparently lockdowns weren’t so tight in the first class lounge.

The room was spacious and high-ceilinged, with excellent air conditioning, huge sofas pressed up against the walls, and a better stocked bar than the one I’d been at. The few of its occupants who looked our way did so with disdain.

“Documents about cloning programs,” he replied, his voice low again.

The last of my good mood evaporated. The cloning crimes of a previous generation had only just become a hot-button topic again. The wrong sort of leak could be very damaging for Britain and create endless work for me.

I reached for the scar on the inside of my arm, then stopped as a thought crossed my mind.

I hadn’t met many jourans, but I’d visited one of their circuses. Those suckers were great for climbing, and like a lot of invertebrates, they could squeeze into surprisingly small spaces.

I looked up. High on the wall to my left, an air conditioning vent hung open. A scrap of red fabric was caught on its edge.

I darted back out through the glass doors and around the corner to the left. In a dimly lit service corridor, the jouran was clambering down from a ventilation shaft, still holding the bag.

“Got you!” I said, grabbing at the fugitive.

I glanced past her down the corridor. A man stared back at me. His face was mine but younger.

I stared slack-jawed at him. This shouldn’t be possible.

The jouran writhed from my grasp, slapped me so hard I fell to the floor, and ran off down the corridor. A door at the end hissed open, letting her and the younger me through.

By the time I reached it, the door was locked shut again.

When Warren appeared a moment later, I didn’t tell him about the younger me. That could lead to questions I didn’t want to answer. But I told him the rest.

As we were heading back down to the main concourse, shared misery gave me a brief feeling of sympathy for Warren.

Our phones both buzzed at once. On my screen was a security coded message from the ambassador.

“Blackmail threat received,” it read. “Criminals threatening to release evidence that the government is still working with k’kiri cloners. Need you back at the embassy now.”

“Damn,” I muttered as we went to retrieve my luggage. “So much for the holiday.”

And so we leave Julian Atticus for this week. He’ll be back, as his job just gets worse and worse. But then, he wouldn’t be happy if he didn’t have something to complain about.