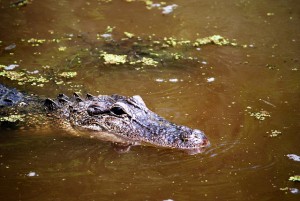 Remi lowered Fiscal and Tromp into the brackish water of the pool, the two otters sliding in with soft splashes. Sleek fur glistened as they swam around the edges, testing the wooden fence that set this place off from the rest of the bayou.

“Y’all ready?” Bobby Reed called out. Not waiting for an answer, the big man tugged the rope hanging from an overhanging branch, raising the gate at the pool’s far side. The gleaming menace of an alligator slid out of its cage, slit eyes scanning its surroundings, mouth wide with pointed teeth and hungry for flesh.

Bobby dropped five whole dimes into the tin cup hooked to the fence, and looked to Remi to do the same. Along the bank on this side of their improvised arena, other men and women were also placing bets. Remi could hear that the odds were against Fiscal and Tromp.

He felt a familiar tingle, a thrill of something more than just excitement, as he matched and then doubled Bobby’s bet.

Already the gator had the otters on the run, chasing them around the pool. They split up, and as the gator chased Fiscal, Tromp gouged at the beast’s side with paws and teeth. The gator snapped at her and she twisted away, but blood trailed from one of her paws. Remi could almost feel her hurt, a stab at his own heart. He kept strong, kept accepting bets as they came his way.

“So much for your pets.” Bobby grinned as the gator chased a panicked-looking Fiscal. “Don’t reckon you’ll be boasting ‘bout how fierce they are no more.”

“It ain’t over yet.” Nervousness tightened Remi’s chest. He dug into his pocket and pulled out an old copper coin he’d taken from a Union soldier back in the war, a coin with symbols like no other he’d seen, but one that had been worth the saving of that man’s life. He dropped it into the tin cup, and as he did so he felt the thrill of their game grow, become something more powerful, something that energised him in proportion to the growing bets and the cheers of the crowd.

Out on the water, buoyed up by that same power, Fiscal turned and gouged the gator on the nose, making it rear back in pain.

“You still in?” Remi asked.

“Course I’m still in.” Bobby fished out a dime, then peered at Remi’s coin. “What do you call that?” He picked it up with a sneer. “This ain’t worth shit to me, boy.”

Without the coin in the pot, Remi could feel power flowing away again. There was a thud as the gator flung Tromp against the fence. Fiscal, suddenly losing the energy that had powered her attack, fled from the snapping jaws.

Remi tensed as those teeth sliced the end from Fiscal’s tail, winced as blood flowed out behind her.

“Here’s another dime then.” He flung it into the pot, then snatched the special coin from Bobby’s hand and dropped it in on top. “This one’s for free.”

“Sure thing.” Bobby added his own dime and turned, grinning, back toward the pool.

His grin melted as he saw the two otters turn, fast and fierce. Fiscal leapt over the gator’s open jaws, planting her claws straight into its eyes. As the creature writhed in pain and panic, Tromp dived beneath it. A red stain spread across the water. The gator rolled over, revealing a deep gash along its belly. It writhed and snarled, but its energy was fading. As the otters swam back toward Remi, the gator finally went limp.

Remi tipped the contents of the tin cup into his satchel. Beside him, Bobby Reed stood slack-jawed.

“Maybe next time you shouldn’t bet so big.” Remi felt the power of the moment fade as he slid that special coin back into his pocket. But the thrill of the game remained.

This one is for Everwalker, inspired by a slightly surreal internet conversation she was part of. It’s also another addition to my weird western setting where magic is achieved through games, and which I should probably come up with a name for.

If you enjoyed this story then you might like By Sword, Stave or Stylus, my collection of fantasy short stories, available now on Amazon.