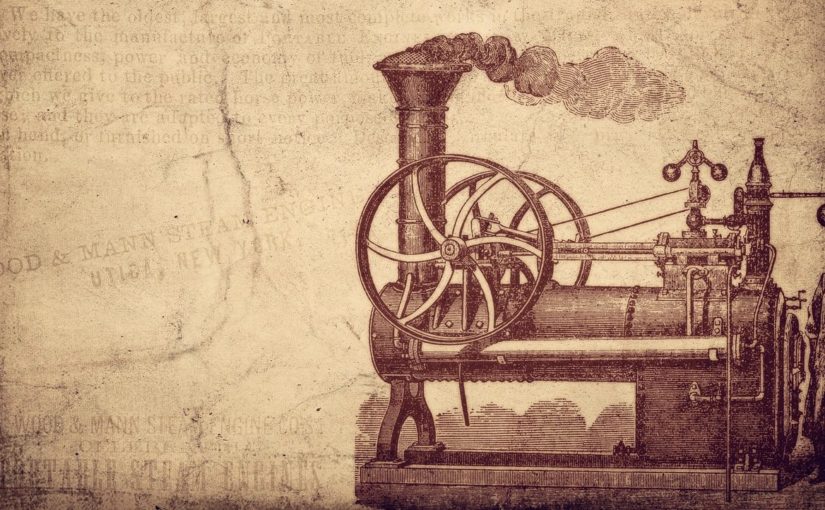 Earnest walked slowly down the line of racing wagons, notebook in hand. Every year, the machines at Cheltenham races became more impressive, these glorious assemblages of brass and chrome, steam pouring from their boilers as they were stoked for the race. He noted the use this year of higher chassis and reinforced front wheels, a shift he considered more a matter of aesthetics than function, as practical as the top hat fashion forced him to wear.

“Hey, aren’t you Earnest Fry?” A young woman in goggles and racing leathers peered out from one of the machines. “Are you going to include my Breeze in your race report?”

Earnest peered at the embossed plate on the hood, carrying the name “Billowing Breeze”. Not a machine he had heard much about, but Cheltenham had provided upsets in the past.

“That depends upon how she performs.”

“Want to find out first hand?” The driver grinned and gestured into the back of the Breeze.

Earnest stared at the trembling boiler, the explosive pressure of its steam barely contained. He swallowed and looked away.

“I don’t ride along. Terribly unprofessional.”

“To hell with professional – you can write about the races better if you know what they’re really like.”

“I don’t need writing lessons from a soot-stained mechanic.”

“You saying you can’t get any better?”

“A dozen awards say that I’m the best.”

“Not this year, though. This year Jardine got the prize.”

Earnest glared at her. He would not be so easily goaded.

“Riding with you would cloud my objectivity. I must give all the contestants fair and equal attention. Now good day.”

He walked stiffly on.

“There’s a simple solution,” the woman called after him. “If it’s really about fairness.”

Earnest gritted his teeth. He wanted nothing more than to get away, to find a nice cup of tea and write up his notes. But other drivers were watching now and he couldn’t have this impertinent grease monkey besmirch his reputation for balanced reportage.

He turned to face her.

“What solution could you possibly have that I have not considered?”

“Ride with all of us. Then there’s no bias.”

He imagined himself climbing into each machine in turn, sitting amid the intricate grandeur of their mechanisms, facing the terrible power of those boilers.

“I have reported on these races since before you were born.” He jabbed the air with his pencil. “My knowledge and objectivity are beyond reproach. I will not be taunted into some act of tomfoolery!”

“How you going to be objective when you’re so wound up?”

“Prove it.” She gestured at the steps up to the cabin of her machine.

Earnest strode over, grabbed the handrail, and climbed up the steps. At the top, confronted with the heat of the firebox and the trembling of the boiler, he froze.

The driver held out her hand.

Earnest wrenched his gaze away from the flames of the firebox. A small crowd had gathered below, chattering about the great journalist taking his first ride. There was an air of excitement. Dozens of faces looked up at him.

He took a deep breath and stepped into the cab.

“Off we go.” The driver kicked the firebox hatch shut, released the brake lever, and pulled back on the throttle.

The wagon shook and started rolling forward, building up speed. Earnest gripped the rail so hard his fingers hurt. He forced himself to keep his eyes open, to see and hear and feel every detail, despite the furious pounding of his heart.

As the vibrations of the engine shook him, an unfamiliar feeling swept through Earnest. The words that crowded his mind fell away, leaving only the sensations of this moment.

As they grew faster, the wind blasted his skin and whipped at his coat. His heart kept racing, but now its rhythm was in time with the engine. He tore off his top hat and waved it in the air.

“This is exhilarating!” he called out over the roar of the engine. “Invigorating! Astonishing!”

Spectators shot past to either side as Billowing Breeze rushed down the course. Some cheered and waved. Earnest waved back.

At the end they stopped. Earnest took hold of the driver’s hand and pumped it up and down.

“You want another go?” she asked, a twinkle in her eye.

“Oh no. I have to be objective.” He pointed to where the other racing wagons stood, a glorious gathering of brass and chrome and pulsing power. “I have to take a ride in all of them.”