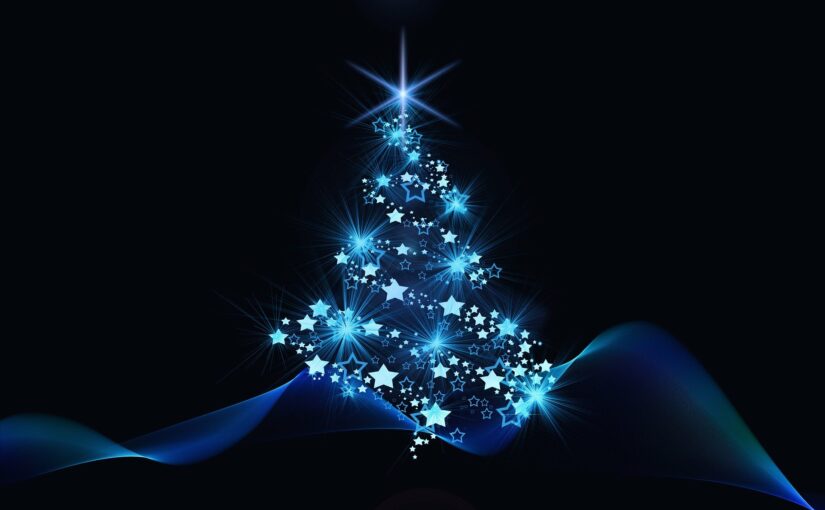 Nigel hated being lumbered with the Christmas shift. Sure, there was extra pay, but it meant missing out on a trip to his parents’ place, to get stuffed full of turkey, spuds, and sprouts. It wouldn’t have been so bad if he was a doctor or a copper, someone who really mattered. But no one was going to break into an office block on Christmas day, regardless of the lone security guard. The whole business was a waste.

He sighed and contemplated the limp, prepackaged turkey sandwich sitting next to the surveillance monitors. As attempts at festive spirit went, all it was doing was to remind him of what he was missing. Not that he could have escaped that feeling, with the Christmas tree across the lobby lit up like the headlights of a hundred cars. Nigel would have switched it off, but he had special instructions to keep it on. Seasonal spirit was apparently part of the building’s brand.

A flash of green made him look up from his monitors. The lights on the tree turned to red, then back to green, before settling on white again. Nigel blinked. Those lights had been white for the past four weeks. He hadn’t even known that they could change colour.

The lights flickered. Nigel sighed, took a box of fuses and spare bulbs out of his desk, and got up from his seat. He might not like the tree, but he’d get in trouble if it went out. His footsteps echoed around the empty lobby as he approached the problem.

The flashing stopped as he got close. Probably one of the bulbs was loose, but which one? It would take forever to go through them all. He peered at the nearest one, which was stark white. He fiddled with it, testing in case anything was loose, but it seemed perfectly secure. The next one, also white, was the same, and the one after that. None of the bulbs near him showed any colour. How had they managed to change before?

The light started flickering again. The effect was erratic, a mix of long and short flashes. Staring at them close up made him feel dizzy. Maybe he could get away with unplugging the lights for a bit, as long as it was to fix the problem.

Nigel pulled the plug out of the wall. The lights kept flashing. For a moment they turned red, then green, then back to white again. Nigel stared in confusion at the plug in his hand. Was there a battery pack he was missing? No, it couldn’t have fitted in the plug, and there was nowhere else for it to go.

Intrigued, Nigel put the plug down and took a few steps back. Watching the lights of the tree blink on and off reminded him of happy days when he was in the Scouts, decoding Morse code messages sent by flashing torches. He’d loved the neat little puzzle of it, noting down the dots and dashes, then translating them into letters. In fact, now that he paid attention, the flickering looked more and more like Morse. There were four dots for an “H”, a dot and a dash for “A”, dot-dash-dash-dot for “P”…

He hurried back to his desk, grabbed a notebook and pencil, and watched the tree. There was a brief blaze of green and red, then the flashes started again. Nigel noted them down, delighted to find that he still remembered all the codes:

“HAPPY CHRISTMAS FROM SANTA AND THE FESTIVE ELVES.”

Nigel laughed. He had no idea who had done it, or how, but that was a lovely little thing to hide away in the wiring of the lights.

“Happy Christmas to you too,” he called out, but it didn’t seem quite enough, so he took a deep breath and started into a chorus of “We Wish You a Merry Christmas”. His voice echoed around the lobby until it sounded like a whole choir was singing, like Christmas eve in church, a time full of joy and anticipation.

The lights stopped flashing. Nigel plugged them back in, just to be on the safe side, and enjoyed the warming glow.

Back at his desk, he unwrapped his sandwich and took a bite. Turkey and stuffing, just like Christmas was meant to be. He smiled. His parents would be sitting down to Christmas dinner right now, and it was nice to think that, in a way, he was eating with them.

Meanwhile, amid the snows of the North Pole, a little man with pointy ears switched off the security monitor he’d used to watch Nigel, smiling as he did so at the thought of a job well done.

If you’ve enjoyed this story, then you can read more like it in my new collection. One Cog Dreaming collects all 52 of this year’s flash stories in one place for easy reading. There’s a shipwrecked sailor in a land of talking animals, a steampunk rebel in a city with only one rhythm, a spaceship hurtling towards disaster, and much more. The e-book comes out on 1 January, and you can pre-order it now.