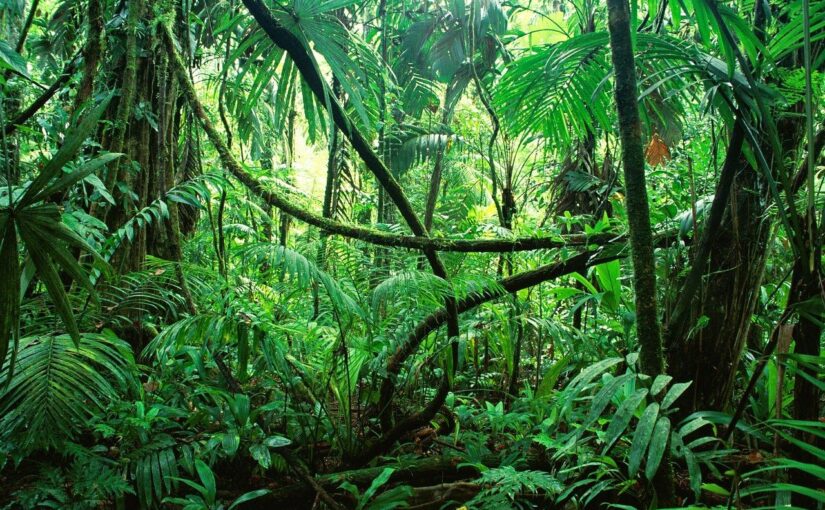 For my first week in the labour camp, the name of Colby was a mystery to me. I heard prisoners use it as a curse when acidic sap spattered their cheap radiation suits. Others shouted the name in excitement when they found a scrap of meat in their stew. The guards flinched from the word, but the guards always looked uncomfortable, like they were the ones being punished. It wasn’t until the sixth night, as we lay in our bunks in the dark, that Jones explained it to me.

“The legend is that Colby was one of us, back in the early days. Seemed like a quiet guy, did his hours, kept his head down, made believe he might make it back to Earth alive. This was before the rad suits, when they slathered prisoners in sunblock and told them that would keep them safe.”

“Safe from the radiation that made this?” I asked, waving incredulously toward the mutated jungle beyond the bars of our cell.

“In case you haven’t noticed, safety standards aren’t high around here. Only reason they upgraded us to rad suits was that it’s more cost effective.

“Anyway, this Colby, he plays things quiet, bides his time, watches for an opportunity. Then one day, he flips. Cuts the tracker out of his shoulder. Breaks his manacles. Starts hacking up guards instead of vines. Leaves three of them in the hospital and runs off into the jungle, never to be seen again.”

“He should be, sure, but people say he found a way to make his own sunblock, stuff that would really protect him. They say he lives off jungle fruit and what he can steal from supply wagons.”

“That’s bullshit. You’d have to be some kind of mad scientist to make a rad blocker from these plants.”

“They say that’s who he was. A brilliant chemist, locked away with the rest of us thugs.”

“More bullshit. Why would a guy like that end up here?”

Jones’s bed shifted as he shrugged his shoulders. “I don’t know. Maybe he poisoned his wife, or built a bomb, or just invented a colour of paint they thought was critical of the government. You know how the system goes. What matters is that he got away.”

I lay there for a long time, thinking about Colby, ragged and smeared with home-made rad-block, feasting on jungle fruits. For a moment, it seemed like there was a way out. But then I shifted my leg and the manacle scraped my ankle.

“Bullshit,” I muttered, before rolling over to sleep.

The one time I saw Colby, I was at the edge of the jungle, sawing down a tree by hand. That was how it all work. They gave us manual tools, and shitty ones at that, so we couldn’t use them to escape or attack the guards or whatever other paranoid crap they thought we could achieve, chained and tagged and light years from home. It didn’t matter to them how long we took to clear space for a settlement. The real colonists were years away.

This was before I’d got used to the struggle, before I’d turned my bureaucrat’s body into that of a grizzled labourer. My muscles were aching and my hands were blistered. I paused, hoping to snatch a couple of minutes rest before the guard noticed and offered me the choice between work and a beating. I’d already gone through the change that mattered, the abandonment of hope. All that remained was to decide between acceptance or ending it. The thought of thirty to life in this hell hole made the ragged saw blade appealing.

A movement in the jungle caught my attention. Someone was staring at me through the trees, a tall, wiry man in the stained and ragged remnants of prison overalls. Something dark and sticky was smeared across his exposed skin and matted hair. He stared at me with wide eyes and pressed a finger to his lips. I looked around, checking in case any of the guards were nearby, and when I looked back, he was gone.

But he was real. I was sure of that much.

In another time, another place, we might have become a cult to Colby. Sneaking away from work to the stump of the tree, close to where I had seen him, leaving scraps of food or small stolen tools, gifts to our ragged hero. We could have turned as crazy as he looked, gifts turning into offerings, words of hope into prayers.

Instead we’ve become a conspiracy. Slowly, surely, we make our plans. Tallies etched in the wood of the stump, diagrams scratched into the back of thick jungle leaves, supplies set aside for our escape, they’re slowly accumulating around Colby’s altar.

Now we know that you really can live in the jungle, another change has come over us. One day soon, we will all be Colby.