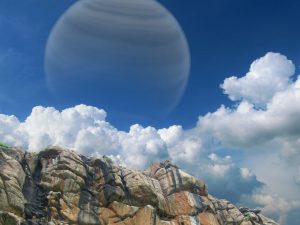 The ground vibrated with the slow, steady rhythm of the vast geo-forming pump, a pulse that filled Zara’s body like a second heartbeat. It promised something better than the dull brown landscape visible through the visor of her spacesuit, a landscape whose monotony ground like sandpaper at her mind. It promised the fertile land that would come once terraforming was complete, a land that would be home to her kids. Paul and Jasmine were somewhere in the geodome up the hill, playing with their friends, while she created the world they would live in.

A world of endless, soul-crushing brown.

Of course, if they let her do this her way then she could see this place transform and brighten in her lifetime. She knew better than anyone which gasses to pump into the rocks, what energies to run through them, to bring the geological changes they needed.

She glanced over at Jim. He was preoccupied taking readings with a scanner. He would never notice.

Casually approaching the pump’s control panel, Zara turned a couple of dials. The long rubber pipes from the geodome didn’t change, but the gas mix in them did.

The ground trembled. Zara frowned. That shouldn’t have happened.

“That’s weird,” Jim said over the intercom. He was peering intently at his scanner. “This says that-”

A nearby patch of ground exploded. Zara fell, black rocks raining down around her. One bounced lightly off her head, and she sighed in relief to see that it was full of air bubbles.

Relief turned to fear as a larger explosion rocked the ground beside the geodome. The crater it left crumbled around the edges.

Frantic voices emerged over the coms. Zara didn’t need them to tell her what was at stake – Jasmine and Paul were in that dome.

She leapt to the controls as another explosion hurled dust into the air. Whatever chain reaction she’d caused, she had to stop it. She twisted dials and flipped switches, pumping different carbon and nitrogen mixes into the ground, trying streams of rare elements and different electro-magnetic pulses, desperate to alter the reactions. The oxygen feed remained untouched. They needed that for the dome’s air.

A roaring filled her ears as the ground gave way beneath one side of the geodome.

“We’ve got a breach!” someone screamed over the coms, as a dense cloud emerged where the dome met the crater. “We need to stop this before-”

Zara stared in horror. In her mind’s eye, Paul and Jasmine gasped for air in a collapsing dome. She almost puked across the inside of her visor.

What if they ran out of air?

She looked again at the dials. Saving oxygen would do no good if she couldn’t stop this.

Trembling fingers grasped the dials as she frantically ran through the chemical options in her head. Then she flipped the switches for two of the rare element mixes and twisted the oxygen fully open.

The thudding of the pump grew faster as it struggled to keep up with her demands.

The ground shook. The whole dome seemed to teeter upon the edge of oblivion.

Then something changed at the edge of the pit. The surface bulged. Brown rocks turned to red, orange, and purple. Coloured seams spread out across the landscape. Crystals appeared in the cloud of escaping gas, filling the gap beneath the edge of the dome.

“Holy cow,” Jim whispered into the silence of their coms. “It’s beautiful.”

The geodome stopped shaking. Slowly, carefully, Zara eased off the feed of oxygen, then the other gasses. At last she turned off the pump and stood in shamed silence.

A crackle of static was followed by another voice over the coms.

“This is Mayor Davies,” the voice said. “Initial reports indicate that no-one has been seriously injured. Thank you, geochemical team, for a quick save and some beautiful new rocks. There’s repairs to be done, but this place is looking a lot more colourful.”

Zara shook her head. What would she say about this? How could people ever trust her to work again?

Jim laid a hand on her shoulder.

“I didn’t realise how crazy the endless brown was driving me,” he said. “Those colours… Whatever you did, I think people will forgive you.”

“I’m not sure I can forgive myself,” Zara said.

As the sun sank towards the planet’s horizon, gems cast light across the landscape, a sea of reds, oranges and purples.

If you enjoyed this then you might also like my collection of short science fiction stories Lies We Will Tell Ourselves. And if you’d like to receive stories straight to your inbox each week, along with a free copy of one of my books, then sign up to my mailing list for all that plus news on my latest releases.