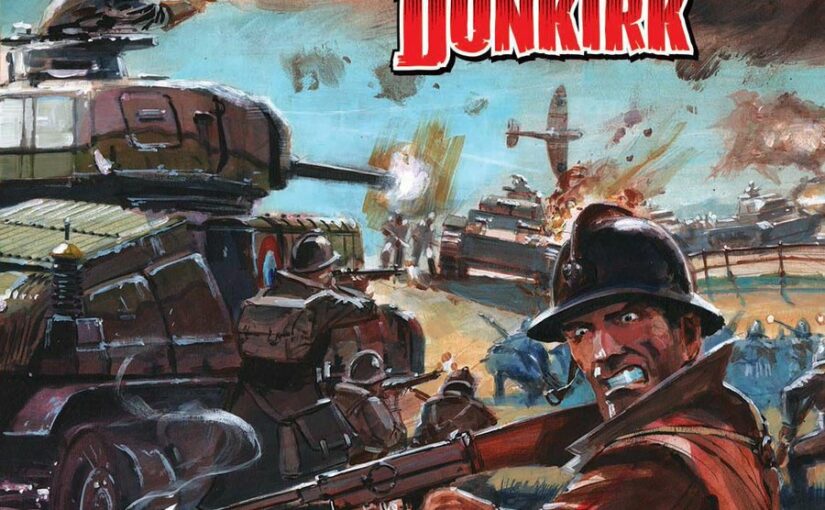 The second of two comics I wrote for the 80th anniversary of the Dunkirk evacuation, Durand’s Dunkirk follows the crew of a French SOMUA S35 tank. With the French armies shattered and the Allies in retreat, Regis Durand and his indomitable crew gain a new mission – to hold up the advancing Germans and allow the British to evacuate through Dunkirk.

A Story of Sacrifice

Both Durand’s Dunkirk and its companion comic, Dodger’s Dunkirk, are stories with a message, but those messages are very different. During the Dunkirk withdrawal, the British showed that there could be courage and even triumph in a well-executed retreat, that not every battle should be fought to the bitter end. But the French army showed how sometimes you have to fight on, one person’s sacrifice becoming another’s salvation. The French fought hard to buy time for the Dunkirk evacuation, even knowing that it would leave their country undefended. That’s the battle that Durand fights.

Just as the evacuation didn’t only rescue British troops, the stand that made it possible wasn’t only fought by the French. The film Darkest Hour touchingly demonstrates this, in a section dealing with the fate of British troops in Calais who fought on as a distraction for the others rather than being given a chance to escape. But it was the French army that provided the greatest barrier to the advancing Germans in those last days.

Another point of this comic was to explore the international nature of the World Wars, a point I bang on about so much it’s probably getting boring, but that bears repeating.

Originally, Durand and Dodger’s comics were pitched as a single script, one that showed how the very different fates of the withdrawing British and the French rearguard were connected. I wanted to celebrate the British success at Dunkirk while remembering how many other countries were involved. It was thanks to my editor at Commando that the one story became two, and I’m really glad I got the chance to expand on that original idea.

In England, we refer to the First and Second World Wars but often neglect that “world” part. Our stories tend to be focused on British experiences, which is understandable but also a bit repetitive, limiting how many facets we see of an incredibly complicated story. There have been some interesting exceptions in recent years, such as the film Hurricane and the recent inclusion of a Sikh soldier in a scene from 1917. I think it’s good that we’re doing that more, as it makes the stories more interesting and more representative of reality. So of course I wanted to depict the French as much as the British in exploring Dunkirk, and also to show other nations, such as the Belgian soldier who plays a key part in both these stories.

One of these days, I might stop banging the drum on this subject. Today is not that day.

The Myth of National Character

This story is also about one of the big myths of late 19th and early 20th-century military thinking – the power of superior national character.

Across Europe, every country found a way to convince itself that it was inherently superior to the rest and that this was reflected in its armed forces. A superior fighting spirit would ensure their victory over a far less impressive enemy. This is a myth that Durand, the tank commander of this story, buys into.

The inherent flaw in this thinking is obvious – if everybody has a superior national character then nobody is actually superior. The myth falls apart based on logic, never mind evidence. It can be a useful myth in motivating troops, but it’s also a dangerous one if it encourages soldiers, commanders, and politicians to ignore reality. Germany didn’t win the Battle of France because of superior national character, but because it had better tactics and the element of surprise. Russia didn’t defeat the Germans in the east because of a greater fighting spirit, but because of superior numbers and a willingness to spend lives in a war of attrition.

Durand goes into the story believing in a superior French fighting character. The question the story asks is how that attitude can stand up to the prospect of defeat.

Both of my Dunkirk comics are out now. Both work as standalone stories, but together they create something more complex, showing the same events from different angles. You can buy them electronically through Comixology, or get paper copies wherever Commando is stocked.