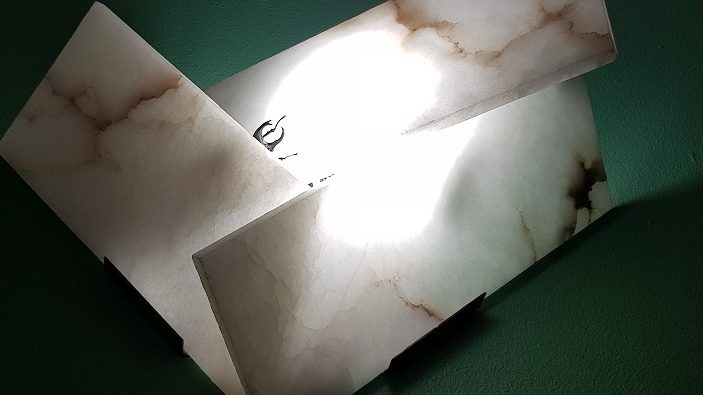 Joel walked into the kitchen. The linoleum was cold beneath his feet and the room smelt faintly of refuse, a reminder to take the bins out tomorrow. He should do the washing up too, but not at three in the morning.

He bumped into a chair, cursed, and walked back to the doorway. He flipped a switch and the light buzzed into brightness, the bare bulb casting a stark light and sickly shadows.

For a moment, he heard chittering, but then it vanished. Work was getting to him, imagining bugs where there weren’t any.

Joel walked over to the sink, rinsed the sticky dregs of beer from the bottom of a glass, and filled it with water. He reached inside his boxers and scratched his arse while he drank.

Through a gap in the curtains he could see his van with its company logo of a crushed beetle. His neighbours hated that van, but that didn’t stop them hiring him to deal with their infestations, from ants to woodworm to rats. Hypocrites, the lot of them.

There was the chittering again, and a single tap. Joel turned around to see a beetle lying on its back on his kitchen table.

He grabbed a pan off the stove and slammed it down, crushing the insect. He grinned as he did it, then grinned even wider as he pulled the pan away and saw the results. The biggest beetle he’d ever seen, and he’d crushed it.

Sometimes he dreamed of doing that to his neighbours too. Maybe one day. For now, he’d made do with laying down poisoned treats for number fifteen’s cat. He’d got some dark looks after that fleabag died, but no-one could prove anything, so fuck them.

The chittering came again. Two more beetles landed on the table, even larger than the last one. These ones scurried away fast and the pan hit the table with an angry but ineffective clang.

The bugs landed on the linoleum. There was a tickling as one ran across Joel’s foot and up his leg.

“Get off me, you bastard.” Joel swatted at the creature, but it scurried around the back and up his thigh. “Get the fuck off!”

He reached around and grabbed the bug. Pincers dug into the flesh at the top of his leg. There was a flash of pain as he wrenched the thing off and flung it away. Blood dribbled, hot and sticky, down the back of his thigh.

More skittering. The tap of bugs landing on the table. Beetles, maggots, cockroaches, worms. Joel’s eyes widened as he looked up. Shadows were moving inside the light bulb, turning into the outlines of creatures that emerged at the top, becoming real as they slipped between socket and glass.

Joel stumbled back across the kitchen, tripped over a chair and landed with a thud. His head hit a cupboard door and black dots danced across his vision. When he blinked them away, they were replaced by giant flies buzzing around him, beetles climbing up his body, maggots wriggling beneath, the touch of their bodies making Joel’s skin writhe in disgust.

He grabbed the counter and hauled himself to his feet. Bugs fell away, pattering onto the floor, but more clung to him, digging their pincers into his flesh, crawling through his hair and towards his face.

The light. They were coming from the light. Turn it off and this nightmare would be over.

But as he reached for the switch more crawled out of it, cascading down the wall and across the floor.

“Help!” Joel screamed. “Someone help me!”

If his neighbours heard then none responded. Instead, a beetle seized its chance to climb into his open mouth.

Joel froze in horror as the thing wriggled across his tongue and brushed against the inside of his cheeks. Then it was at the back of his throat and it was too late to scream.

With a wild, flailing movement Joel slapped the light switch. Something crunched beneath his hand, spattering him with its insides, but he still hit the switch.

The light went out.

Joel sank choking to the ground. Bugs crawled across him as the world faded to black.

This story was inspired by an art exhibit at the Henry Moore Institute in Leeds, where bugs were emerging from light fittings. I’ve never seen contemporary art so clearly ready to inspire horror.