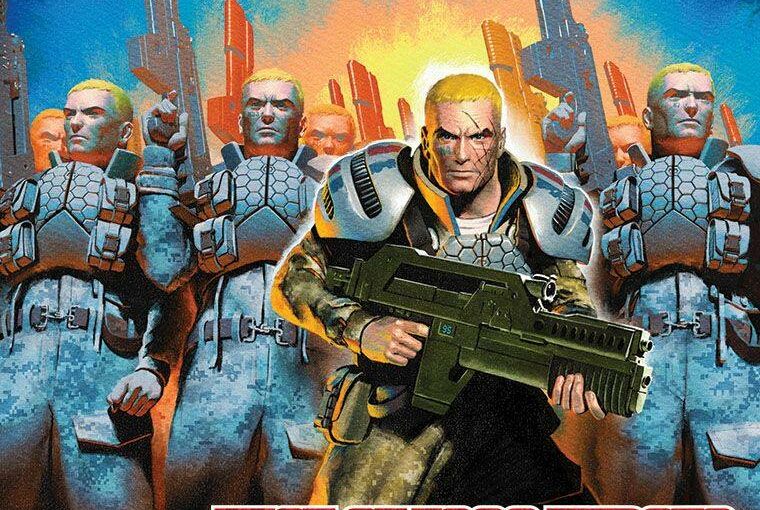 In the year 2104, regular military forces are obsolete. Instead, Iron Wind Corporation has created an enhanced army of super soldiers known as N-Unit. Engineered to be faster, stronger and braver than normal fighters, N-Unit is a clone army. Together they are unstoppable — that is, until one member goes rogue…

I’ve been writing comic scripts for Commando for a couple of years now. In that time, I’ve told a lot of stories that I’m proud of, from the intense urban warfare of Rats in the Rubble to the epic story of 1066. But this month sees the story I’m most excited about – a sci-fi adventure called Face of 1000 Heroes.

How the Story Came About

This story started at a comics convention.

I love history, and I’ve got the degrees to prove it, but as a fiction writer, my abiding passion is science fiction and fantasy. So when Commando publisher DC Thomson put out a collection of their old Starblazer comics last year, I was excited to see whether there might be more in the works.

Not long after, I met Gordon from Commando‘s editorial team at the Thought Bubble comics festival. Thought Bubble is always an amazing place to be, browsing the incredible range of comics being put out by British creators. It was fantastic to see Commando flying the flag for historical action alongside the superheroes and whimsical humour that make up so much of the comics scene. Naturally, I mentioned how excited I was by the Starblazer release, and asked whether it might mean more sci-fi from DC Thomson.

Following that conversation, Kate McAuliffe, the fantastic editor I work with on Commando projects, invited me to pitch a couple of sci-fi stories to her. While there’s no more Starblazer in sight yet, she accepted one of those pitches as a Commando comic, with a few changes to better fit the Commando theme.

And so a story was born…

Face of 1000 Heroes follows a group of identical cloned mercenaries. I could give a load of highbrow reasons why I wanted to write about clones, from questions of consciousness and free choice through to a fascination with what makes an individual. But if I’m honest, the real reason is two pieces of sci-fi I loved as a teenager – Star Wars and Space Above and Beyond.

I grew up before Star Wars really got into clones. The prequel movies weren’t out yet, so the clone wars were this vague concept mentioned briefly in passing. Even when clones started to appear in stories like the Dark Empire comics, they weren’t well fleshed out. But that idea of wars between clones lurked in the back of my mind, a concept tugging at my curiosity down the years.

Then there was Space Above and Beyond, the shortlived TV show about US marines fighting a war against alien invaders. When it was bad, SAaB was pretty ropey, but when it was good, it was spectacular, and there was nothing like it on TV. One of its characters had been grown in a vat, part of a group known as In Vitroes or tanks, a non-identical clone underclass. Originally grown for war, the tanks were social outcasts, used by the show to explore issues of prejudice and segregation. A rich and fascinating history was hinted at during the show’s all too short run, before some nameless TV executive killed the series I loved.

Rebellion, the Most British of Virtues

As a student of history, I’ve often found rebellions exciting. From the Spartacus revolt in ancient Rome, through the American Revolution, to the resistance fighters against Nazi occupation, military history is rammed full of rebel heroes.

And despite our outward image of conformity, the British have a long, proud tradition of rebellion. Boudicca’s revolt of 60AD turned Roman Britain upside down. The Civil Wars saw dozens of dissident groups reshape politics and religion, from the Roundhead armies to the radical agricultural protest of the Diggers. The 19th-century Chartists and 20th-century suffragettes helped bring on a real democracy.

Even within apparently conformist war stories, the heroes are often the rebels, the people who buck against corrupt authority and don’t play by the rules. It’s why Richard Sharpe has become such a popular figure in fiction.

The Long History of Mercenaries

The fact that the clones in this story are mercenaries also has its roots in history. Though we’re now used to thinking of armies as belonging to nations, armies have often worked differently. Late medieval Italy was reshaped by the condottieri captains, while the British East India Company ruled a whole country through private armies.

The past 20 years have seen private military firms gain influence and attention again, thanks to the use of companies such as Academi (formerly Blackwater) in the Middle East. Mercenaries, who not long ago seemed like figures from the past, increasingly look like the future of military action. That made them a natural choice for my story, helping to distinguish the military culture of my clones from the modern military while giving them someone to rebel against – the ruthless company they were bred to serve.

The title of this story is an inversion of one of the most famous works on storytelling, Joseph Campbell’s The Hero with a Thousand Faces.

Campbell’s book explores fundamental patterns in myths and storytelling. Released in the 1940s, it was hugely influential over the following decades, not least on a certain young director named George Lucas.

Now its influence is on the decline. Writers from different backgrounds have shown that many of Campbell’s generalisations don’t hold true. He’d found one pattern of myth-making, but it wasn’t as universal as he claimed. Many modern storytellers work hard to drag us away from Campbell’s monolithic form.

So there you go – the origins and influences of a single sci-fi comic. If you’d like to see more sci-fi from Commando, or more British sci-fi comics in general, then please go out and buy this one. Experiments like this help publishers to understand what their audience wants, and the more people buy Face of 1000 Heroes, the more likely it is that Commando will publish more sci-fi. Hell, if enough of you buy it, then one day I might get to write the other story I pitched, the one with a carnival planet, a talking cat, and a space station that folds up in your pocket. Dream big, right?

And to all of you who’ve already picked up a copy of the comic, thank you very much, and happy reading!