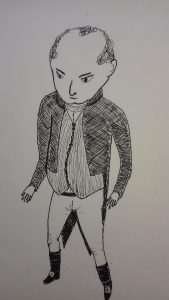 When Talia saw what Jan Shofflekrep had chosen for his lair, a shiver ran up her spine.

The mausoleum was older than the rest of Rubble Town, probably older than the docking towers holding the city above. It was a thing of old, cold stone, mottled with lichen and blackened with soot. Winged figures of chipped marble perched above the doorway, judging those who entered. Above and around it all lay heaps of the rusted gears and broken machinery that were the raw materials of Rubble Town.

Their captors led her and Pollyglog inside. She had stopped the bleeding from her companion’s neck, binding it with scraps of his shirt, but he was pale and his footsteps uncertain.

Inside the mausoleum, oil lanterns burned in recessed niches. Soot from their flames left dark trails up the walls.

Yet despite their desperate circumstances and the aura of gloom, she felt quietly confident. If the radicals wanted them dead, they wouldn’t have brought them here. Something more was at stake.

A tall figure turned to face them. Jan Shofflekrep brushed strands of greasy hair from his eyes.

Here was Talia’s target at last. All she had to do was work out how to take him.

“Let’s have proper introductions this time,” Shofflekrep said loudly. “Who are you?”

“Speak up,” Shofflekrep said, tapping at his ear. “Too long working around machines.”

Talia could understand that. She still had cotton in her own ears, protection against the noise of The Anvil. Protected by the walls of the mausoleum, she took out the earplugs.

“I’m a detective,” she said, raising her voice.

“My employer,” she said. “From Foil Military Services.”

“A dirt digger and her mercenary boss. How disappointing.” Shofflekrep looked to his armed men. “Kill them.”

Talia’s heart raced. She had miscalculated, and badly. But there had to be a way out. There always was.

“I could work for you,” she said. “Gather information. I’m good at it. I know all sorts of dirty secrets that politicians and manufacturers don’t want getting out.”

“And why would I trust you?” Shofflekrep asked. “After all, you’d be betraying your current employers.”

“I despise my employers,” Talia said with all honesty. “Killers for cash. These days, the mercenary companies spend as much time oppressing the city as protecting it.”

“Spoken like a true revolutionary.” Shofflekrep’s dark eyes narrowed. “Or someone who wants to sound like one.”

“Put me to the test,” Talia said. “Let me share what I know with you. Or send me to find out something new.”

Talia relaxed. The thugs had taken a step back. She shook out her arms and legs, trying to lose the tension of the past few hours. It had been a tough time and she was full of aches, but soon it would be over. She’d leave Pollyglog with Shofflekrep as a hostage against her good behaviour, then come back when she’d had time to prepare. Soon, she would retrieve them both and earn her bounty.

“Here.” Shofflekrep drew a thin knife from his pocket, the sort she’d seen leather workers for precise cuts. He cast the knife at her feet. “I’ve got your test – kill your boss. Set yourself free, like a good worker should.”

Talia stiffened. She might not like what Pollyglog stood for, but she’d grown fond of him over the past few days. He didn’t deserve to die.

Then again, neither did she.

She stooped and picked up the knife. The handle was well worn, smooth against her fingers. If she didn’t do this, the radicals would just kill them both. That was what she told herself as she rose and turned to face Umberto Pollyglog.

The words were like a blessing, a confirmation that this would be alright. That she was just doing what she had to do.

From plaques on the walls around them, the carved faces of long dead nobles watched the confrontation play out. Witnesses to a crime in progress.

Talia had investigated hundreds of crimes. She had heard the words “I had to” too often for them to ever hold true.

“I won’t do it,” she said, turning to face Shofflekrep. “Foil Services are brutal, deceptive shits, but so are you. It’s one thing to arrest someone for a bounty, but I won’t murder for you.”

His men grabbed her from behind. She didn’t try to hang onto the knife. There wasn’t any point, not trapped in here, outnumbered and with no other weapons on her side.

“Take them to one of the factories,” Shofflekrep said. “Stick them under a steam hammer and let it do its work.”