When I was six years old, Dad took me to the cinema for the first time. They were showing a triple bill of the original Star Wars trilogy. It was one of the most amazing moments of my young life.

By the standards of its day, Star Wars was incredible. The effects, the world building, the grand storytelling. To a six-year-old staring at the big screen for the first time that impact was magnified a hundred times over. Entire planets hung suspended before me in the darkness of space. Exciting characters and strange creatures battled for the fate of the universe. Explosions filled my entire vision. There were sword fights and gun fights and dogfights and Han Solo being immensely cool. I was too young to sit through six solid hours of it, and so Dad missed his chance to watch Return of the Jedi in the cinema, but still, my tiny mind was blown. 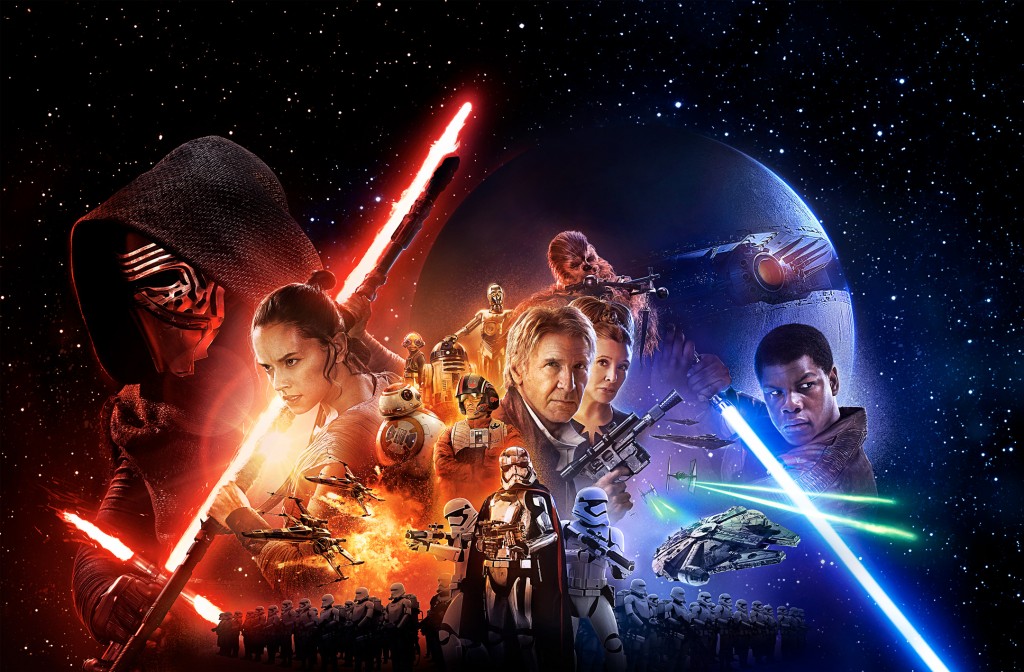 Thirty years later, I went back to the cinema with Dad to see The Force Awakens. As a Star Wars fan, the journey to that point had been a bumpy one. There were awesome action figures, and then there were broken action figures. There were those first exhilarating extended universe novels, with all the promise they held for more of what I loved, then some less inspiring novels, then deciding I’d grown out of tie-in novels because I was eighteen and wanted to read ‘proper fiction’. There were the remastered films, which brought back the spectacle of Star Wars on the big screen, but with inconsistent visuals and scenes that were better off cut out. There were the prequels, which were their own strange mix of excitement and bitter disappointment.

So here I was again, with Dad, sitting in the cinema as the trailers ended and the credits rolled. I could feel my heart beating in my chest as John Williams’ amazing score sounded against a backdrop of stars and the introductory text scrolled up the screen. I waited tensely to see what this would be – an Empire Strikes Back or a Phantom Menace.

I’ve read some wildly varying reviews of The Force Awakens. For some people, it’s what they were after, a fun space romp. For others, it’s Hollywood treading water in bloated style. I understand the different perspectives. I think there’s something valid in all of them. It’s a matter of taste and of priorities – what you think is important in a film. And having re-watched the original films before seeing this one, there’s a lot about them that hasn’t aged well. I long ago accepted that my childhood fixation is not as perfect as I remember it being when I was six.

But for me, The Force Awakens was a perfect experience. It was everything I loved about the original trilogy, combined with 40 years of progress in blockbuster film-making. The action was spectacular. The characters were splendid. The visuals were jaw-dropping. Han Solo was still cool. There are plenty of flaws, but I was drawn along despite them. For the whole length of the film, I was caught up in a wave of sheer childlike excitement. It was as amazing as I remember the original trilogy being, not just as good as they actually are. This is what Star Wars means to me – it means recapturing the innocence and imagination I once had. The Force Awakens did just that.

And once again, my Dad loved it too. He didn’t even miss out on part of the fun because I was fidgeting.