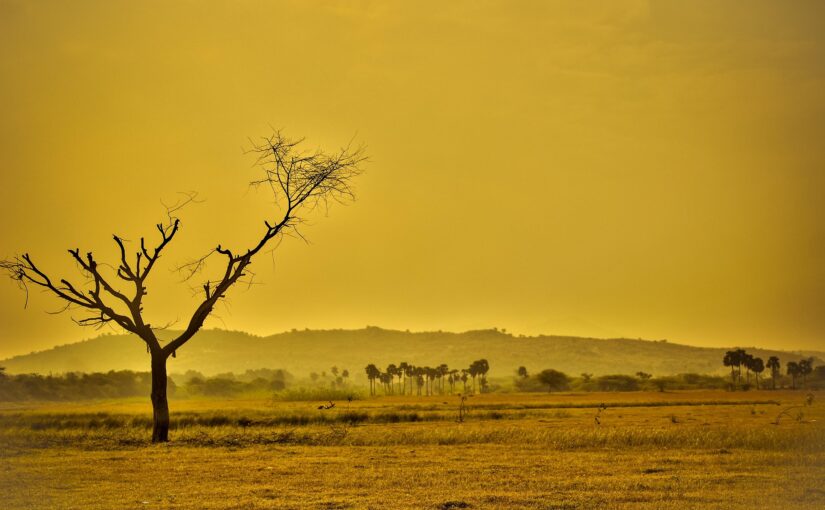 Every morning, I fetch water from the river. I dip my jar into the shimmering, ephemeral current, watch droplets drip from the baked clay and vanish in the air. The jar weighs heavily on my head as I walk steadily up the stony bank and across packed earth, ignored by the vultures drooping from the skeletons of trees. I walk into the village, its dirt darkened by ashes and old blood, and pour my water into the bowl where my family used to wash. The bowl is broken, but the water fills it. A ghost of water in the ghost of a bowl, poured by the ghost of a woman.

I have walked this path and poured this water every day since I was old enough to bear the weight of the jar. I have kept walking and pouring every day since I died. While I do this, some part of my life remains. The damn builders will not win.

People are moving across the distant fields. A dozen of them, scuttling like beetles. Most carry spears, though one has a gun. Two carry a crate between them and move more warily than the rest. I don’t know their faces but the features are familiar, lips and noses of families I knew. They must come the caves where the survivors hid. I went there once, years ago, but it was too sad to stand beside my sister and not be heard, to see her scars and not be able to heal her. So I returned to my home, to my routines.

My bones lie next to the cracked bowl, as dessicated and dust-flecked as the river. Its bed is cracked like the skin of the farmers’ hands that brought life to this land before the dam. When I pour water into the bowl, I see those fields as they were: the green shoots of grain, beans sprawling up frames, goats muttering to each other. As long as I fetch water, something lives.

I turn from the bowl, from lost crops and the ghosts of goats. The people I saw are tiny, fragile things now, like insects approaching the dark wall of the dam, miles up the river bed from here. When it comes, their shouting is so distant it’s almost lost on the wind. A tapping repeats twice, then there’s silence.

I lift my jar onto my head. Normally, I only walk to the river once, but today feels different. At the bank, I hesitate. The ghost of our lost water has been growing fainter these last years. I can barely see it any more. Instead, I stare at the cracks in the dirt and feel as though I am sinking into them, draining into this parched land. The sun eases across the sky, its heat beats down, the shimmering memory grows fainter still.

There’s a roar in the distance, some beast I’ve never heard. A cool wind whispers through me. I don’t feel the ground shaking—how could I?—but I see pebbles dance.

I look upriver, into the wind. The unrelenting solidity of the dam has been broken, a gap appearing in its upper edge. Darkness streams out, staining the river bed. The darkness spreads toward me and my mind scoops up what I am seeing, carries it from my senses to my thoughts. Stunned and elated I stare.

The dam is broken.

As if that thought had touched the world, a whole flank of its dark wall shatters, tumbles, is swept away by surging water. The sound of its collapse reaches me a moment later. The river bed by my feet has darkened as the first damp eases into it, but that’s nothing. Cold currents of air spill through me as the water rushes past my feet. Real water, life-giving water, not the thin shadow I have clung to.

My jar lies discarded by my feet as I clasp my hand to my mouth. I would cry, but I have no tears, and so I laugh.

The water is silted; nothing could live in this. But soon it will settle, fish will return, the land will be green again.

My laughter is high, skittering, broken. I should be full of wonder, but instead I am made of fear. I have kept the memory of the river all these years, and it has kept me. What will happen to us now? When the dam builders sent their men, when the cold of the gun pressed against my head, I didn’t want to die. I still don’t. The thought of not existing terrifies me even more than the destruction I have seen, and I can no longer hide from that fear by carrying water.

A woman is approaching, one of those who went from the cave to the dam. The one with the gun. She stops right by me, reaches down, and for a foolish moment I think that she is picking up my jar. Instead, her hand passes through it. She dips her fingers in the river, drips the muddy water onto her tongue, smiles as bright as sunlight flashing off a fish’s fin. It’s the smile my mother had, and my sister. One I had too.

She slings her gun over her shoulder, leans down, dips both hands into the river. Water drips between her fingers as she walks steadily up the stony bank, across packed earth, past the vultures that flee from their trees at the strength of her stride. Dark drops and footprints mark the path I have followed for so long. At the edge of the village, she kneels and releases her remaining water into the dirt.

I am not afraid any more, not for myself or for the land, because I know that something lives on. I look out across the memories of grain and goats and beans. I let myself fade.