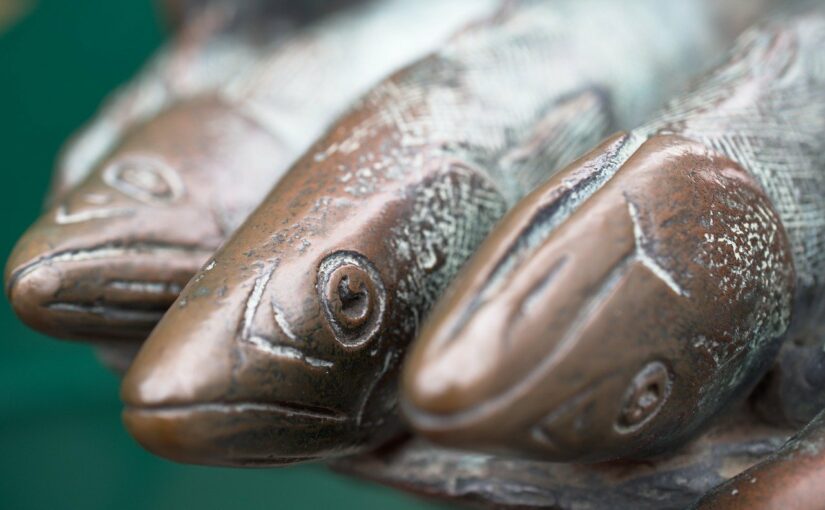 The Reverend Hastings straightened his collar and pressed his hands together in a posture of prayer, fingers rising like a steeple above his supper plate. It was Friday, and so of course Mrs Abernathy, the housekeeper, had served him fish, in accordance with his own instructions and the traditional tenets by which a good Christian lived.

Mrs Abernathy had precise opinions on how fish should be served, opinions which the Reverend Hastings dared not defy, and as a result he found his dinner staring up at him, a beady eye glistening in the face of a whole cooked herring. He found the sight distasteful, but understood that this was fish as Christ himself would have seen it, shining in the nets on the shores of Galilee, and so he accepted it as one more providential source of inspiration for the prayers which would one day bring him a miracle.

The gleaming eye swivelled, the pit of its pupil staring straight at him.

The Reverend Hastings leapt back and his seat thudded to the floor. He pressed his hands to his chest and felt the racing of his heart as the fish twitched, then wriggled, then arched its back and leapt up to balance on its tail. Both eyes gazed down a pointed silver face towards him.

The Reverend Hastings’ alarm turned to exaltation as he realised what was taking place. He had always known that his faith, though less ardently expressed than that of the fiery modern evangelicals, was a tower of secret strength inside him. Now the Lord had recognised that faith.

“My miracle,” he whispered, sinking to his knees.

“Your miracle?” the fish asked. “Which of us has come back from the dead?”

“A talking fish! Truly, the Lord moves in mysterious ways. What message do you have for me?”

“What do you think I am, the postman?” The herring flexed its fins. “My message is for my own people.”

“Oh no.” The Reverend Hastings pushed himself back to his feet, from which to look down upon this obstinate son of the sea. “This is my miracle. It will prove to all the parish that I am worthy of their attention. It will be my loaves and fishes moment.”

“Loaves and fishes, eh?” The herring bobbed its head. “Let me try something.”

It spread its fins and made a melodious gurgling sound, like a mermaid’s song emerging from the depths of the ocean. The Reverend Hastings tingled from his smallest toe to the tips of his ears. Suddenly, another man appeared beside him, and another, and another, popping into existence one at a time until a score of them stood in a circle around the dining table. Every one looked exactly like him.

“How…?” twenty clergymen chorused, then clamped their hands to their mouths in alarm. “Why?” they murmured in unison, the words filtered through trembling fingers.

“Because I have a message for all herring kind,” the herring said, its voice somehow noble despite the flapping of its diminutive jaw. “And I’ve got to get their attention somehow – herring are very hard to please.”

The Reverends stared at each other with wide eyes. A talking fish no longer seemed so extraordinary.

“How do I know that I am the real me?” the Reverends Hastings asked, their voices wavering. “Which of us has been offering up prayers all these years? Which of us…” They swallowed, struggling to sustain themselves in the face of the next thought. “Which of us has our soul?”

“All of you, I suppose. Or none of you perhaps. It’s much the same thing.”

The Reverends shuddered. “Which is the real me? Which of us is this moment for?”

“Oh, I see.” The herring’s tone was rich with slowly dawning realisation. “You’re trying to draw a distinction that doesn’t exist. You are all just as much the Reverend Hastings as each other.”

“But then what makes me unique?” the Reverends asked, their limbs hanging as heavy as lead, their vision blurring with unshed tears.

“Maybe I have a message for you after all,” the herring said, hopping to the edge of its plate and from there down onto the floor. “Simply to live is a miracle in itself, and one does not have to stand out from the crowd to be amazing.” It patted one of the Reverends on the shin. “Just ask all those fishes Jesus was so fond of.”

Using its tail fins as tiny legs, the herring wobbled its way to the door. As it stepped out of the dining room, Mrs Abernathy walked in. She looked down at the passing fish, then around at the assembled Reverends, her expression shifting through curiosity to confusion to resignation in the space of seconds.

“I suppose you’ll be wanting the large teapot then?” she asked, picking a Reverend at random to address.

Nineteen Reverends Hastings nodded in unison. The twentieth was staring out the window, his attention caught by a beam of sunlight streaming through the garden. His thoughts filled with the wonder of God’s creation, like the thoughts of so many men before.