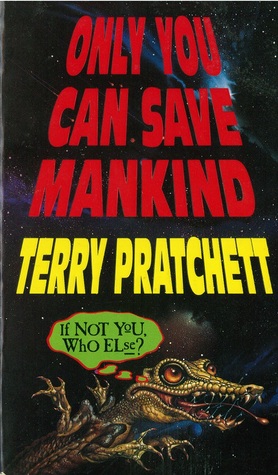 With the sad passing last week of Terry Pratchett, I felt an overpowering urge to re-read one of his books, both for comfort and as an act of remembrance. I chose a book that is not among his most celebrated works, but is one of my personal favourites. And in it, I found a reminder of what made Pratchett so great.

Only You Can Save Mankind

Only You Can Save Mankind is the first of Pratchett’s novels about Johnny Maxwell, a relatively ordinary twelve-year-old living in a rather ordinary English town. Johnny’s life is a mundane one of hanging out with his friends and playing computer games, given a deep vein of sadness by the ongoing collapse of his parents’ marriage.

Things change one day when the ScreeWee, the alien enemies in his computer game, ask to surrender to him. They want to go home in peace, and only Johnny will listen to them. With other players still frantically trying to kill the ScreeWee, it’s up to Johnny to save the aliens. Or, as the ship’s translator would have it, to save mankind.

Despite its silly central concept, the pervading tone of Only You Can Save Mankind is one of sadness. Johnny’s home life is falling apart, leaving him neglected. The ScreeWee, forced into endless warfare, just want to return home in peace. Johnny and his small group of friends are socially ostracised, brought together in part by the loneliness each feels within their own family setting. Bigmac in particular is shown to be a product of Britain’s neglected urban estates and a family that doesn’t know how to care.

All of this is depicted with deftness and subtlety. Though it’s clear from early in the book that Johnny’s parents’ marriage is falling apart, and that this is taking a huge emotional toll on Johnny, we aren’t told this directly. In as far as he understands his circumstances he is also trying to not address them directly, to avoid that disruption and sorrow. But the things we are shown about his life make all this clear without Johnny having to understand it. It is simply and beautiful written.

This sadness, like so much else in the book, is a demonstration of Pratchett’s humanism and his incredible ability to explore the human experience. In Only You Can Save Mankind, that humanist eye is turned upon the experience of war and the ‘them and us’ mentality that allows it to take place.

Johnny’s own experience with the ScreeWee war is paralleled by the First Gulf War, portrayed in the news in the background of the story. It leads Johnny to raise such innocent yet insightful questions as ‘how can we be the good guys if we’re dropping smart bombs down people’s chimneys?’ Like much of Pratchett’s work, the book doesn’t say that there are easy answers, and by the end of the book Johnny’s non-violent ideals are tested to the limit. But it’s a book that challenges the value and righteousness of military action, that suggests that violence might not really be the solution to any problem.

What This Book Means to Me

One of the reasons I chose to re-read this book is that it’s one of my very few books signed by an author. The copy sat in my lap as I type this is a copy once handled by the great Pratchett himself, given to me by my aunt and uncle for Christmas 1992, the year the book was released. In the front, beneath the title Only You Can Save Mankind, is written in the author’s own hand: ‘To Andrew, If not you, who else? T Pratchett’.

That signed page is not only my strongest physical connection to one of my favourite authors. It is also an intellectual and emotional connection, a reminder of why Pratchett has long been such an inspiring figure to me. Even in a book filled with sadness, the fundamental message is an optimistic one. We can make our own fates. Humanity can save itself, and it is worth saving. We have responsibility for our own lives, and the opportunity to use them well. All of this, themes Pratchett raised again and again in his fiction, is expressed in that pairing of the book’s title and a quote from within it.

Only you can save mankind. If not you, who else?

This book also hit me in a very personal way. Like Johnny, I was twelve years old at the time of the First Gulf War, and saw it play out on the news. I faced the same challenges as him in making sense of what was going on, feeling that these distant, terrible events and the attitude many people took to them weren’t right. People were dying in an inglorious war over oil and ego, while news media turned it into a computer game-style pageant.

In retrospect, I had more in common with Johnny than I realised. It would be ten more years before my parents separated, but by the time I read this book their marriage had fallen into silence and the slow death of love. It’s no wonder that Johnny’s ‘trying times’ hit me so hard, even if I couldn’t recognise their relevance.

Over time, I lost the idealism that the book displayed, the belief that I could and should take control of my own destiny. Though I’ve found that again, it’s been a rough ride, and re-reading this book was a reminder of that.

Even without that personal relationship, this would be a book worth reading. It’s simply and beautifully told, with a message of hope in humanity despite its cynicism about our baser instincts. If you haven’t already, I recommend reading it.

So thank you, Sir Terry, for this and many other inspiring books. Your body may have stopped, but the wonder and inspiration of your stories live on.