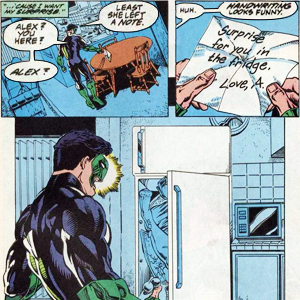 The thing growled in the darkness, blood dripping from its claws. Dirk took a step forward, pistol in one hand, lantern in the other. The creature took a step back, turned and raced away. For a moment, Dirk sagged with relief. Then he looked down and realised that he was too late. A body lay in the doorway, slowly turning as cold as the flagstones beneath it. An all too familiar face looked up at him…

I was thinking today about an upcoming scene in the book I’m writing. I’m planning to kill off a minor character to demonstrate a threat and crank up the tension. It’s not exactly a novel tactic – writers use it all the time. When it’s done well, it’s very powerful. When it isn’t, you get tropes like Women in Refrigerators, where significant female characters die just to motivate their male counterparts.

As I pondered this scene, I realised that I was falling into the trap of that trope. I had two characters whose deaths would fit the plot, and I’d defaulted to killing the female one. My protagonist likes her more than the male character. Her death would provide greater motivation.

That was when alarm bells started to ring in my head. It might make a stronger motive to kill this character, but it would also perpetuate a troubling trope, one that contributes to unequal representation in culture, to the positioning of women as less important.

It was only as I stepped back from that thought, considering what would happen if I killed the male character, that I realised something else. Killing off the character my protagonist cared about, making what followed partly about vengeance, didn’t make for a better motive – it made for a shitty one.

If a friend of my protagonist dies and he sets out to avenge her then his motive is personal. It’s about his emotions. But if someone he doesn’t like dies, and he still sets out to deal with the perpetrator because every life matters, then he’s living up to a higher moral standard. He’s protecting everyone, no matter who they are. He cares about all of humanity.

Developing my character’s story through the death of someone he doesn’t like makes a more powerful point about the moral values and strength of character on display. He would be weakened as a character by making it personal.

I don’t know if this has been said elsewhere in relation to women in refrigerators, but it’s the first time it’s really struck me. This vengeance-fuelled trope doesn’t just weaken the representation of women and so the value assigned to them in society. Like so many gendered tropes, it does the same for men. It normalises vengeance and anger as better motivators for them than moral values or making the world a better place, and that’s a terrible message to send. We become better if we can look beyond the personal to do what’s right.

So I’m definitely not killing of that female character. I’ll still get a death in to keep the story going, but it’s the male character who will die. And my story will be more powerful for it.