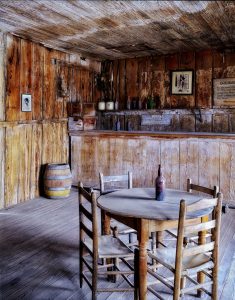 In the corner of the room, his coup stick was gathering dust, a grey fuzz settling across its bright ribbons and dangling feathers. There was no point picking it up if he wasn’t going to channel the magic of the coup game. And there was no point fighting against the powers that held him here.

Besides, life wasn’t that bad.

He slid into his buckskin pants and loose shirt, then headed barefoot down the stairs. In the main bar, Ernie was laying out plates of eggs and toast for his regulars. Food kept coming in, even if folks couldn’t get out.

As Laughing Wolf picked up his plate from the bar, four hulking white men came in off the street, the saloon’s doors swinging shut behind them. Two of them were carrying axe handles and one was wearing brass knuckles. They all wore six shooters.

The leading thug walked up to Laughing Wolf.

“Looking for a woman by the name of Lizzie Wayne,” the brute said. “You know her?”

Laughing Wolf pointed up the stairs. No point fighting, as he always said these days.

“Third door on the left,” he said.

As the men tramped up the stairs, Laughing Wolf took his usual seat by the window and started eating his eggs. The sun fell across the same patch of table it did everything morning. The eggs tasted the same as every morning. So did the over brewed coffee Ernie brought to the table. It was all comforting in a way that his wandering life, following the herds of buffalo across the plains, had never been.

The banging of a door came from overhead.

Laughing Wolf tried to ignore it, focusing on his eggs.

There was a rushing of feet, a shout of anger, and the sound of something smashing. A woman yelled in alarm.

Everyone looked down at their eggs. Laughing Wolf found that his had lost all their flavour.

A gunshot was followed by a bellowed curse and the woman shouting again.

Laughing Wolf’s table by the window didn’t feel so comfortable any more.

As the crashing and yelling continued, he pushed away his plate, got out of his chair, and walked up the stairs. He walked past the open door with the splintered frame, down the hallway to his room.

It had felt good to let his coup stick gather dust, not to accept responsibility for himself or his world. He would miss that dust.
He picked up the coup stick. It was as long as his arm, with a hooked end. He left his six shooter and his hatchet by the bed. Those were the rules of the game. You couldn’t count coup if you also fought to kill.

Barefoot, he padded down the corridor. The woman was cursing someone out at the top of her lungs.

“Where’s the money, bitch?” someone yelled.

There was a slap.

Laughing Wolf rounded the doorway and looked in. Two men were holding Lizzie Wayne against the wall by her arms. Curly black hair tumbled across her night dress. Blood ran from her lips. Another man stood facing her, while the fourth smashed up furniture and peered at the pieces.

“I won that money fair and square,” Lizzie Wayne said.

“That’s not how Mister East sees it.” The thug pulled back his hand.

The smasher of cupboards caught sight of Laughing Wolf.

“What?” the man snarled, drawing his pistol.

Laughing Wolf darted toward him. The gun rose. He twirled his stick. The shot went wild, the gun’s roar leaving a ringing in his ears. Then he reached out and tapped the man in the chest with the coup stick.

The man turned sluggishly to face into the room.

Two of the others had drawn their guns now. Laughing Wolf flung himself to the floor behind the bed. Bullets ploughed into the wall above him and splinters of wood sliced his forearm.

The man he had touched with the coup stick fired at his companions and they fired back. Seconds later, Laughing Wolf’s protector lay dead on the floor, along with one of his former comrades.

Laughing Wolf rolled under the bed and stretched out with his coup stick.

“To hell with you, red man,” the lead thug said as he trapped the stick beneath his heavy riding boot. He bent over and peered under the bed, pointing his gun in Laughing Wolf’s face.

There was a yell and a thud. The man turned around just in time for Lizzie’s knee to collide with his face. He flew back in a spray of blood and teeth, his head hit the wall, and he slumped motionless onto the floor.

Laughing Wolf rolled out from under the bed. The man who had been holding Lizzie lay sprawled by the door, head lolling to one side, his face turning from red into the purple of a massive bruise.

“Thank you,” Lizzie said. “That was mighty kind.”

“I’m going back down for breakfast,” he said “You want to see if we can get sausages?”

“I thought it was always eggs,” Lizzie said, picking a dress up off the floor.

This is the third in a series of flash stories I’m stringing together into something larger. Here are the previous episodes:

Next time, there are choices to be made, with the fate of the town at stake…