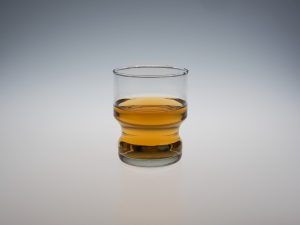 I knew I didn’t have a problem. But my folks were fifty-seven different flavours of worried about me. They worried about what the bottle was doing to my body, to my relationships, to my soul. I had to do something to show I was taking their worries seriously. I wasn’t going to waste a month in rehab, not even if it was paid for out of mum’s bonus, and I sure as hell wasn’t opening up to a counsellor week after week. So I took the only option I had left – I went to Ghost Town.

As I stepped off the ferry and onto the pier, I straight away got a hit of how the town got its name. A wave of images washed over me, swirling out of the fog that lay across the place like a constant shroud. Images of so many things that mattered to me – lost loves, dead friends, childhood pets, and yes, I’ll admit it, a wild night or two. Even knowing that they weren’t real, that it was just the magic of the place, I staggered back, trembling, and almost fell into the oil-filmed river.

Then the images passed.

I hailed a cab and headed into town.

An hour later, I was settled into my hotel room. It had all the usual stuff – room service menu, code for the wifi, directions for if the fire alarm went off. And on top of the heap, one brochure that was special to this place – guidance on dealing with the ghosts.

I chucked it in the bin, opened the window, and let the fog roll in. Better to get this over and done with so I could go home.

I sat back in a frayed armchair, watching the fog by the faltering glow of a bedside lamp. There were fewer faces this time, more memories of a different sort. Chaotic images of lost nights and empty bottles.

At first, they made me laugh at the memory of happier days, when everyone accepted me for who I was, without all this bullshit about how I was wrecking myself, how I was tearing the family apart. But the laughter was like the last dregs of beer swirling around in an empty can.

“Screw that.” I leapt up and slammed the window shut. I didn’t need to put myself through this. Enough people had seen me get on the ferry. They knew I’d come here. I’d just tell them I’d seen Uncle Alfie and cousin Jen and Tiddles, the first in our long line of hamsters. I’d say that the spirits had taught me the error of my ways and that I was all better now. They’d be happy and they’d be off my back.

The hotel I’d booked into wasn’t a specialist place for people dealing with substance abuse. The menu included plenty of beers and a passable wine list. I selected a bottle whose price would just look like a meal on the bill, then reached for the phone.

Outside the window, shapes were still swirling. Jen really was there this time, a trickle of blood running down the side of her face, just like it had done at the bottom of the stairs.

My mouth went dry. I put the phone down, took a deep breath, and opened the window.

“Why do you think?” she asked in turn.

“Nobody said that it was.”

My words faded, no more solid than the fog.

“You can’t hide from me forever,” she said.

A hand appeared, holding out a bottle. I wanted it so badly, I was grasping at fog, my fingers passing through the one thing I wanted to hold.

Different images now, all of them me. Falling down in the street, falling out with friends, falling puke-stained and red-eyed into bed.

“Nobody’s taking anything from you,” said a fog version of my face. “But what are you taking from yourself?”

The images vanished back into the swirling night.

My whole body was shaking. I closed the window against the cold and wrapped a blanket around myself, but didn’t feel any warmer.

The menu was still open. I ran a finger down it again, then picked up the phone.

“I’d like to order some room service,” I said, then hesitated, caught between desire and desperation. “A burger. And cheesecake.”

“Anything to drink with that?”

“It’s on its way. And will there be anything else?”

I took a deep breath.

“Do you have a number for a counsellor?”