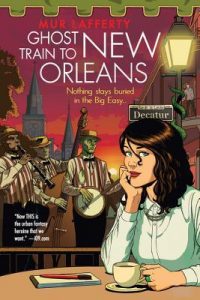 A lot of urban fantasy heroes feel a little too perfect. Even their flaws are flaws that are meant to look cool, like arrogance, a drinking habit or a vampiric curse.

Zoe, the hero of Mur Lafferty’s Ghost Train to New Orleans, is different. She seems incredibly real. She struggles with self-confidence and with a low-level management job. She’s learnt how to fight monsters, but doesn’t know enough about the culture of the undead to avoid being tricked and confused by them. She gets into socially awkward situations. When she’s not getting her job done, even for perfectly legitimate reasons, she frets about it. It’s nice to read a story from such a plausible perspective.

Ghost Train is a relatively light read. It’s got some interesting ideas and characters, and uses its unusual premise – a travel writer for the unliving – to good effect. It picked me up when I was feeling down. If you like your fantasy fiction to be well grounded then you should give this or the previous book, The Shambling Guide to New York, a go.