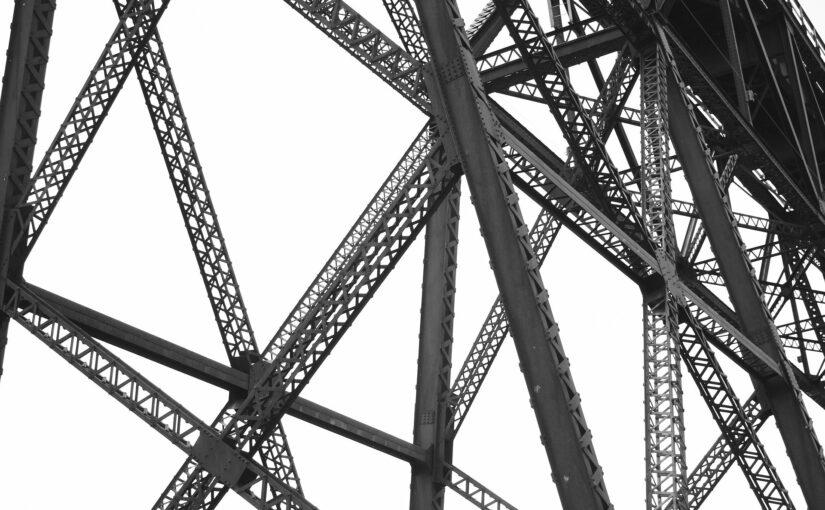 The sundered cities of Halderleft and Halderright wheeled through the sky, steam billowing from their airbags, their steering wings rapidly turning on the ends of vast pistons. Lori hung from the exposed edge of Halderleft, the wind whistling through her leather safety harness, as the extended gantries and connecting rods of Halderright came closer.

“Ready,” she called out to the engineers waiting among the girders around her. “Ready… Now!”

The airbags of the cities collided in a slow crush of crumpling canvas. A moment later, there was a crash of metal and the whole city shook. For the first time in fifty years, the two halves of ancient Halder came together.

At Lori’s command, engineers followed her out onto the tangled beams, looking for connectors to bolt together. From the far side, Rightwise engineers in their canvas harnesses rushed out to join them.

Lori found a place where two joining beams crossed, in line with the plan. She took a bolt from her belt, but while the holes in the Leftwise beam were circular, just like her bolt, those in the Rightwise beam were square.

She looked up to see a Rightwise engineer with a square bolt in his hand, staring at the same problem.

“What is this?” she shouted over the grinding of girders as the gasbags started pushing the cities apart. They only had moments to secure the connection.

“Square bolts so you can see which way it fits,” he shouted back, pointing at the holes. “But what’s this nonsense?”

“Round bolts so it doesn’t matter which way things fit!”

It was already too late. The Rightwise engineer shouted about Leftwise idiocy as the girders scraped over each other and the cities pulled apart.

Hours of frantic semaphore signals followed, and with them a new plan. Once again, Lori found herself hanging among the gantries and connecting rods.

“Now!” she shouted as the airbags collided.

Leftwise engineers raced out across the closing beams, then flung lengths of cable to the other side. Rightwise engineers did the same, ropes uncoiling as they tossed them. Then both sides stood staring at each other.

“Tie them off!” Lori shouted as the beams scraped and strained, about to pull apart again.

“You tie them off!” a Rightwise engineer shouted.

“You were installing pillars to tie them to.”

Lori cursed and looked around. If she was quick, maybe she could grab a cable from each side, tie them together, and…

With a grinding of metal on metal, Halderleft and Halderright pulled apart. Cables trailed beneath both cities like tentacles dangling in the wind.

More semaphore flashed back and forth, the conversation slower and steadier this time. It took two days before Lori hung from the girders again, holding a coil of cable with a hook on the end.

“Ready,” she called out as the cities spiralled in towards each other, the gasbags met, and the exposed edges of two communities collided. “Now!”

She ran out along a beam. From out of Halderright, an engineer rushed along his own beam towards her. As they swung past each other, the Rightwise engineer held out a hoop on the end of a cable. Lori hooked her hook through the hoop. A moment later, the cable tightened as her team frantically turned their winch. All across the joining works, cables were connecting. Girders scraped against each other, then settled into place, the two cities finally flying together.

Lori shook the hand of the Rightwise engineer. He didn’t take off his glove first, which seemed rude, and he looked at her tool belt with a combination of confusion and disdain.

“Nice to meet you,” he said in a strangely clipped accent.

“You too,” Lori replied.

The engineer looked around as their teams greeted each other, and he grinned.

“The greatest engineering feat of our generation, and we made it happen,” he said. “Now we can all relax.”

Lori watched the interactions around her, the awkward pauses, the misunderstood accents, the moments of incomprehension at each other’s slang.

It seemed to her that the hard work was still to be done.

If you’ve enjoyed this story, then you can read more just like it in my new collection. One Cog Dreaming collects all 52 of this year’s flash stories in one place for easy reading. There’s a shipwrecked sailor in a land of talking animals, a steampunk rebel in a city with only one rhythm, a spaceship hurtling towards disaster, and much more. The e-book comes out on 1 January, and you can pre-order it now.