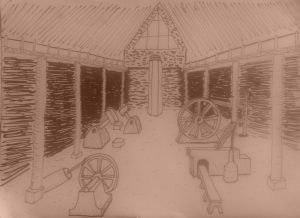 Talia had come down to Rubble Town to earn a bounty. Now some goon might get paid for killing her. She didn’t enjoy the irony much, but she had to admit, it was better than nothing.

The radicals dragged her and Pollyglog through the door of a factory. It was one of the improvised places that people built down in The Anvil, abandoned machines and rusted gears brought back from the dead by poor but ingenious engineers. Perhaps the men and women who assembled these machines were among her captors, using their own handiwork to finish her off. Poor engineers were just the sort to listen to a demagogue, honest or not.

Whether they built the place or not, the radicals were known here. No-one asked questions as they led in their two prisoners, one with bandages around his neck. When the motley group approached a pair of giant steam-powered hammers, the crews backed away.

The noise was intense. It set her ears ringing, then that ringing became a pain, like nails driven into her skull. She wished she hadn’t taken out her earplugs.

She wished she’d never come here. That she’d followed her instincts and said no to Pollyglog’s job. But it was too late for regrets now. Or perhaps too late for anything else.

Someone knocked Talia’s legs out from under her. She thudded to her knees, shock and pain jolting through the noise. Then they pressed her face against the cold metal of an anvil.

One of the hammers hung above her, steam pouring from the piston that drove it.

She wasn’t ready to die. Not yet. She tensed herself ready for action.

On the next anvil over, tears were running from Pollyglog’s eyes. The poor useless accountant had pissed himself too, a dark stain spreading across his crotch.

The sight made her angry. Angry at his employers for sending him where he didn’t belong. Angry at Jan Shofflekrep, a man who preached equality just to make himself powerful. Angry at the idiots who listened to him and who were going to kill her and Pollyglog.

The anger gave her strength. She lashed out with her leg, even as she pushed herself off from the anvil. Her heel slammed into someone’s shin and she felt rather than heard his bone snap.

She whirled around and punched a woman grabbing at her. Blood sprayed from her target’s broken nose as Talia darted past her.
Halfway to the door, she remembered Pollyglog. Common sense told her to keep running, that it was too late to save them both.

It wasn’t a day for common sense.

Factory noise ringing in her ears, Talia turned. Someone was swinging a wrench at her. She grabbed their wrist, twisted, and tore the wrench from their hands. Then she hit them with it, doubling them over.

The hammer was rising above Pollyglog. It was about to smash his head like a ripe fruit.

Ignoring the radicals, she leapt at the machine. She grabbed hold of a pipe, red hot metal scalding her hands, and yanked it free. Steam sprayed the women holding Pollyglog down. They lurched back, mouths wide in screams. Talia’s ears didn’t register the sound.

The steam hammer’s arm sagged and then went still.

The last couple of thugs were coming for her. She stopped to pick up the wrench again, but the pipe had burnt her hands too badly. Just touching the handle made her scream with pain.

The men grabbed hold of her. They laid her head back under the other hammer. Cold metal pressed against her cheek. Hands held her in place with a strength born of fury.

It was a shitty way to go, but at least she had tried.

One of the men released her. Talia turned and saw a wrench collide with the other one’s face. She rolled off the anvil a second before the hammer slammed down.

Umberto Pollyglog stood over her, the wrench in his hand. He was grinning and saying something. She wished she could hear his words.

Or hear anything. Because then and there, the ringing and the pain in her ears passed some critical point and the world went silent.

Talia couldn’t hear what Jan Shofflekrep said when he saw her waiting outside his lair. But she could see the desperation in his face.

“How?” She didn’t need to hear the word. He was looking at her hands, swathed in bandages and empty of weapons, and he wore a triumphant grin.

She pointed past him, to where Pollyglog stood, pistol trained on Shofflekrep’s head.

“That’s how,” she said, wishing she could hear her own words.

The cat had fleas like the city had people – numerous, tenacious, and irritating. But Talia didn’t mind. Because when the cat sat in her lap and she laid her hand on its chest, she could feel it purring.

The doctor said that her hearing should return. Not perfect, but enough to get by. Until then, at least she had the purring.

She looked at the door of her office. A client could be knocking right now and she wouldn’t know.

Talia didn’t mind. She sat back, closed her eyes, and didn’t listen to the sounds of Rubble Town far below.

In her lap, the cat purred.

And so ends another little series. Next week, I’m starting the historical fiction I delayed a couple of months ago. If you’d like to make sure that you get every episode, please sign up for my mailing list. You’ll also get a free e-book, and if you get bored you can just unsubscribe.