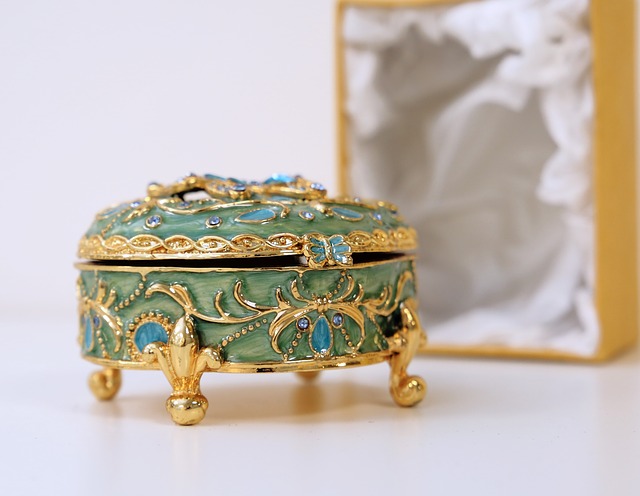 “It’s for security,” Lady Winters explained. “I’ve had broaches stolen by servants in the past. I want a jewellery box that will jab anyone who tries to open it the wrong way.”

“It could make a noise instead,” I said. “A tiny clockwork alarm to scare them off and draw attention.”

“I’d rather draw a little blood, to make my point clear.”

“Aye, I get it.” It was an odd request, but I could follow the logic. It would certainly be an interesting challenge to craft, and I loved a challenge, the thrill of putting the pieces together. “Come back in a week, I should have something for you.”

Most people came to the artisans’ district on clear days. Lady Winters preferred to come in the smog, and returned a day late because of it. She said that she liked the shadows the buildings cast through the grey-brown gloom, but she never seemed to linger.

“I included something to clean the needle as it goes in and out,” I said, slowly raising the lid of the jewellery box. A needle emerged from a hidden hole in the cushioned interior.

“It will help preserve the mechanism.”

“Yes, but…” She looked away to the left, as if gathering her thoughts. “I want the blood as evidence when I challenge the would-be thief. If the needle is cleaned it will be less effective.”

There were better ways to prove a case, but if there was one lesson I’d learnt as a maker of mechanisms, it was to give the customer what they wanted.

I sat over the box, carefully taking parts out and putting others in. Removing the cleaning mechanism was satisfyingly simple work that let my mind wander.

What Lady Winter was asking for didn’t quite make sense. I could have made a mechanism that would have stained the thief’s hands, proving their guilt far more effectively, but she’d refused it. The lady’s logic seemed needlessly cruel, but her behaviour showed a calm rationality. Like gears in a poorly made clock, the pieces didn’t fit together.

Could there be a different reason for wanting to stab whoever opened a jewellery box? Some sort of strange prank, perhaps?

It could be a way to deliver poison, but that was absurd. It would be obvious who the killer was, as they’d provided the box. Lady Winter herself would hang for it.

The shop bell chimed and Hooper, a steam mechanic from up the street, walked in amid a swirl of smog.

“You got time to fix a watch?” he asked.

“In a couple of hours,” I said. “I have to finish a job for Lady Winter first.”

“Ooh, one of the nobs gave you a job before they all left town,” Hooper said. “Very fancy.”

“What do you mean, left town?”

“Whole court’s gone to the country until the fog passes.” Hooper chucked me a newspaper. “You need to get your nose out of your gears and learn about the world.” He put his watch down on the counter. “I’ll be back tomorrow, yeah?”

“I wanted to share a drink before I go,” Lady Winter said. “To toast your remarkable accomplishments.”

She took two tin cups off my shelf, unscrewed the lid of a hip flask, and poured out measures of something sweet and heady smelling.

“But before we drink, could you show me how it works?” she said, nodding to the jewellery box.

“Of course.” I picked it up and started setting the mechanisms. “You know, I saw your picture in the paper yesterday.”

“They never quite get me right,” she said, smiling sweetly.

“Of course not,” I said, handing her the box. “They didn’t even know that you were in town, unlike all your friends.”

“That’s not what the papers say.”

She pressed the switch which had previously disabled the stabber.

“Ow!” She dropped the box and looked down at her hand. The sweet calmness of her usual demeanour was gone. “What have you done, you little bitch?”

“A jabber with a set of inked needles. They tattooed my maker’s mark onto your palm. I didn’t want trouble in my workshop, so I told the authorities to look for someone who looks like Lady Winter, with that tattoo on their hand. Told them the person was a poisoner who’d commissioned a killing box.”

“Perhaps. If you drink both those cups you poured, then I’ll tell them I was wrong.”

“Aye, then Hooper finds me in five minutes when he comes to fetch his watch. He raises the hue and cry and they start hunting you straight away. Or you can leave now and I’ll give you two hours head start.”

She looked at the cups, the box, her hand, and back to me.

“You should have been the assassin,” she said. “You have the cunning for it.”

“You should have been an artisan,” I said. “It’s honest work.”

And for the steampunk lovers: