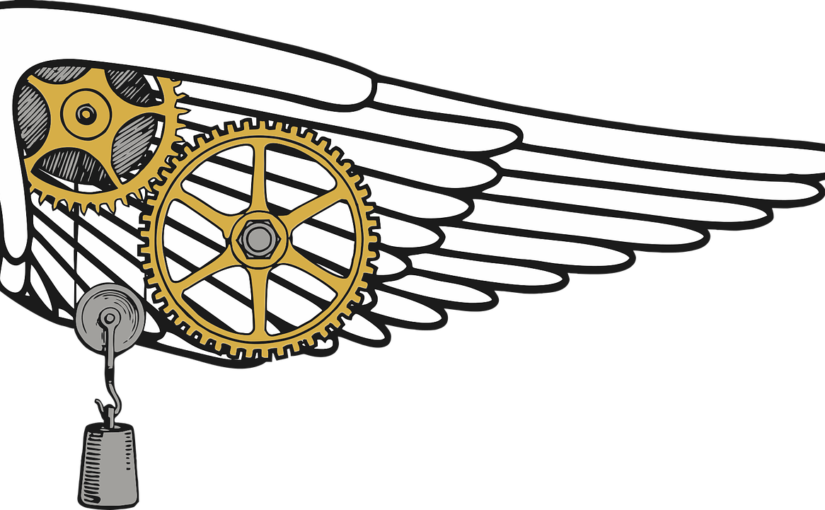 Professor Halleux watched the airship lift away from the docks and into a clear blue sky. Another vessel completed, another crew and their passengers launched into the wide yonder. Twenty years as master of her own air yard, and there was still satisfaction to be had from a finished project.

Time to take stock, to pull out the well worn blueprints and to prepare for the next order. With all the final checks and then the bustle of the launch, it was days since she’d been inside the workshop. It would be a relief to put her feet up and spend some time with her old tools.

She walked into the workshop and stopped, unsettled. The regular tool racks and shelves of components had been pushed back against the walls, as had some of the workbenches. In the empty space stood three figures.

“Ingrid?” Professor Halleux shouted. “What is this?”

Halleux’s apprentice scuttled out of a back room, carrying a set of aviator’s goggles.

“Professor, perfect timing!” Ingrid pulled the goggles over the head of one of the figures. “I’ve just finished preparing.”

As her eyes adjusted to the gloom, Halleux now realized that the figures were dummies, all dressed in leather overalls and strapped into mechanical contraptions.

“I should not have to repeat myself,” she said. “What is this?”

“I’ve been working on some alternative flight options we can offer to customers,” Ingrid said. “This one is a glider, allowing free flight from a starting point aboard an airship or other transport vessel.”

She pulled a cord and canvas wings unfolded with a clack.

“Did you waste good balloon canvas on this?” Halleux asked.

“Well, it’s not the sort of thing our customers are after.”

“Then how about this?” Ingrid stepped to the next dummy, which already had thinly curved metal wings extended. She pressed a button and flames roared from a funnel just above waist height. “Jet propulsion. It only carries fuel for short flights, but you can take off from the ground!”

“Our customers are not looking to sprout wings. Please put things back in order, I want to sit down and start planning for the meeting with Von Chauffen.”

Ingrid grinned and reached up to spin the propeller blades that sat on the helmet of the final dummy, stretching out two feet to either side.

“I really stretched myself on this one, thinking beyond conventional approaches to flight. A horizontal propeller that lifts the wearer into the air. It’s not as fast as the jet, but you can hover in place, if you want to.”

“Extraordinary that after all this time you have not learnt what it is our customers want. That you would waste time and resources on these ridiculous, impractical machines.”

“Surely we have to try new things?”

“No we do not. We have machines that work, that solve the problem of flight, that carry people around the world. If that’s not good enough for you, then you are in the wrong profession.”

“You used to be an inventor, an innovator, a champion of progress.”

Halleux stared at the girl. How dare she talk like this when Halleux had taken her under her wing, taught her the secrets of the trade, trained her in everything that was needed to take to the skies?

“I am an inventor. I defied gravity itself, and I won. You have barely even mastered the reinforcement of gas bags.”

“Who needs reinforced gas bags when you have wings?”

“Don’t take pride in ignorance. Now tidy this nonsense away. Any components that can’t be returned to supplies will come out of your wages.”

With a sigh, Ingrid started unstrapping the glider’s pack.

Halleux still wanted to sit down and put her feet up, but with all the furniture rearranged she couldn’t even see her chair. Instead, she stood staring at the dummy with the propeller on its head. A long neglected impulse stirred her hand, and she pushed the propeller blade, watched it turn and listened to the click of its mechanism. Ridiculous, and yet…

She unstrapped the helmet, flipped open a panel on the side, and peered at the mechanisms. Intriguing. Not how she would have made it, but a good start. With a more refined drive mechanism, better control could be gained, and then there was the question of how fuel was fed to the motor. She patted her pocket and realised that there was no magnifying glass there. Sometime in the past decade, she had stopped carrying it.

The feeling that had hold of her was familiar, even though she hadn’t known it in years. She strode over to the middle dummy and peered at the jet engine. Perhaps these things could be combined. That was often where the best advances came from.

“Professor Halleux?” Ingrid said quietly from the back of the room. “I’ve, um, I’ve cleared the way to your chair.”

“Not now, girl.” Halleux shook her head. “Come here and tell me, what is the fuel mix? And have you considered a second jet funnel?”