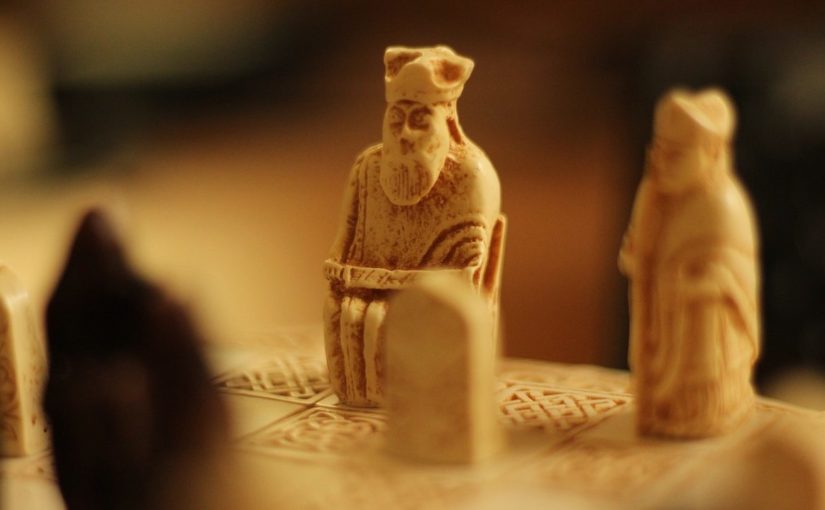 I found it in the back of my grandfather’s cupboard, as we were clearing out his house. A king piece from the game Dreaming Cogs, which he used to play in the park with his friends. He’d taught me too, and the feel of the piece brought back memories of his smile.

I dusted the tin king off with a corner of my tailcoat, wound the key in its back, and set it down. It marched back and forth, guided by tiny and intricate gear systems, trying to give orders to pieces that weren’t there.

“You know there’s been a revival,” my father said. “You should take that and play at one of the new clubs.”

I shook my head.

“I’m out of practice, and I don’t even know how this king behaves.”

But two days later, I walked into the pub where the Desperate Dreamers Club met, holding not just that king but a whole Dreaming Cogs set.

“I used to play with my grandfather,” I explained to their president. “I wanted one last game in his memory.”

“Membership is a shilling.” The president smiled. “Who knows, you might decide you want more than one game.”

She was right. The minute I started winding my pieces and setting them out, something swelled inside me. The world seemed brighter as I made my first move.

Grandfather’s king won for me. He was a custom piece whose pattern of orders caught my opponent by surprise. As his arm nudged my other pieces and then triggered their actions, the other side swiftly became penned in, unable to manoeuvre.

“I say, that’s a marvellous piece,” my opponent said as he shook my hand in surrender. “Don’t suppose you’re selling, are you?”

That had been my plan when I walked through the door, but I found myself drawn in another direction. Instead, I found a fresh opponent and set up a new game.

By the end of the afternoon, a small crowd had gathered around my sixth consecutive match. Somewhere in that crowd, I felt the memory of my grandfather watching me, encouraging and guiding.

“You’re dashed good at this,” my latest opponent said, dabbing at her forehead with a handkerchief. “And that king of yours…”

On cue, I tapped the king’s head, sending him into action once more. A cascade of pawns and my queen’s witch advanced in a dance dictated by the king, one that could easily have become a tangled disaster, but instead brought me inches from victory.

I smiled. Now I had the measure of grandfather’s piece, I could set up these complicated strategies. It was immensely satisfying.

“Is that king strictly legal?” one of the observers asked. “It doesn’t sound like a regulation mechanism.”

“Dreaming Cogs is all about custom pieces,” I said, remembering the first lesson from my grandfather. “Its beauty is in the unexpected.”

“Our sport has moved on since the days of backroom tinkerers and custom cogwheels,” the president said. Her tone had been sharp since I’d beaten her in my third game – losing to a new arrival had clearly stung her pride. “If you want to keep playing with that king, then you’ll need to find a registered craftsman to bring it up to standards.”

My jaw dropped. She wanted some stranger to mess with this beautiful, intricate mechanism my grandfather had made.

I took the king off the board, forfeiting the game as I did so, and clutched it close to my chest.

“Then maybe I should give you your shilling back. We only take regulation players here.”

Without another word, I gathered up my pieces and stormed out. Gasps and giggles told me how much sympathy I would have received if I’d pleaded my case. I’d thought I’d found a connection, but these people didn’t understand the game my grandfather loved.

It was a warm summer’s evening and so I walked to the park to calm myself down. Sitting on a bench at the edge of the rose garden, I took the king out of my pocket, wound him, and set him on the ground. My grandfather’s memory hovered in my mind, an image of warmth and kindness.

“Maybe I should let you go,” I said, looking down at the tin playing piece with its tiny crown.

Then I heard voices across the park. I looked up to see grey-haired women and men sat around a cluster of rickety wooden tables, playing Dreaming Cogs into the evening just like my grandfather had done.

With a trembling hand, I picked up the king and walked over.

“What a splendid king!” a woman said, peering into my hands. “It’s almost as fine as mine.”

She plucked hers off the board to show me. Its shape was unlike any king I’d seen before, with two ordering arms and a turban instead of a crown. When she set it back down, her opponent made no objection.

“Could I play next?” I asked in a small voice.

Someone pulled up a chair for me, while another of them started setting up the board.

“My grandfather made this,” I explained, feeling like a small child showing off a toy.

“My nephew made mine,” the woman said. “I still don’t know all the tricks he built in, but who cares? There’s beauty in the unexpected.”

Smiling, I sat back and watched their match. In my mind’s eye, my grandfather smiled.