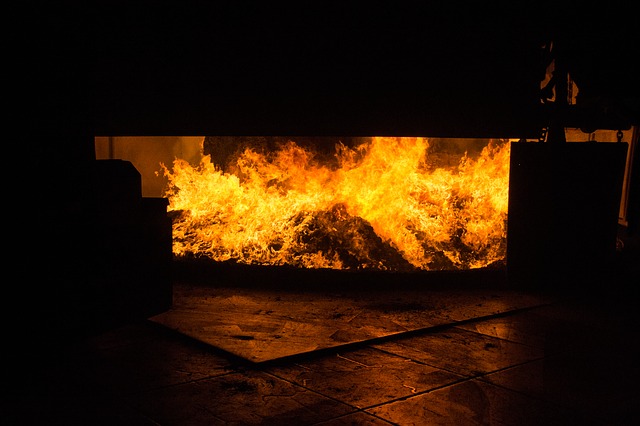 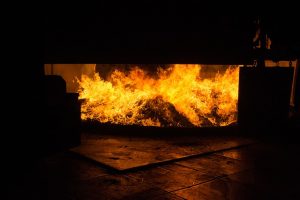 Tam heaved another shovelful of coal from the great heaps of the engine room into the roaring flames. Muscles strained beneath skin scarred by fire, like that of so many of the other boiler men. They all moved like automatons, keeping to the steady rhythm of their work. The fires had to be stoked, the ship kept moving as they steamed towards war.

Suddenly, the fire flared. Blue-green flames burst from the roaring red depths. The boiler men flung up their arms and leapt back in alarm.

All except Tam. He let that brief flash of flame wash across deadened skin, singeing his hair and beard. Decades of feeding fires in the darkness had bred a toughness few could match. He had seen men burned alive or scalded to death when the hull split and water hit the boiler. He had seen the worst that the Steam Wars had to offer.

Still, a shudder ran down his spine.

The flames coalesced into a monstrous shape of jagged teeth, writhing tentacles, and blazing eyes. Its mouth opened and the sounds that emerged were not human, yet Tam understood them.

“I am Lokras the Destroyer,” the creature roared, the heat of its breath scorching the hairs from Tam’s arms. Embers fell glowing from its jaws. “Down long eons have I lain beneath the earth, locked in darkness with all that remains of the forests that were my empire. At last I am free, and this world will again be mine. Bow before me, puny creatures!”

Around the engine room, men sank to their knees, trembling in terror.

But though he shook, Tam held his ground.

“I ain’t afraid of you,” he lied, folding his arms.

“You dare to challenge me?” The creature swept towards him, a tide of fire and rage. “I will burn you to ashes and devour your soul.”

“You think you’re the first ancient spirit I’ve seen unleashed?” Tam forced a laugh. “I was on the Colossus, the pride of the fleet. Folks said it was a mystery how she sank, but I know. I was there when Blind Gorash burst from the coal and demanded our service. Only I survived, but I remember.”

The spirit hesitated, then rose up, looming over Tam.

“If Gorash had emerged, I would sense him,” it said. “We were foes in the Killing Time. Our fates are bound. Now get onto your knees or be destroyed!”

“That’s pretty much what Gorash said.” Still carrying his shovel, Tam walked across the room, not knowing if he might be turned to charcoal at any moment. So much hung on what sort of creature this Lokras was. His only hope was to be bold.

On the wall was a pipe with a tightly sealed valve. Tam stopped beside it.

“When Captain Flynn said she wouldn’t bow down, Gorash sank the ship,” he continued. “Lost with all hands, Colossus was. Well, all hands but me.”

“Lies! Gorash is great and powerful.”

“Aye, yes. But like you, Gorash came back made of flame. What do you think happens to a fire creature when its ship sinks?”
He thrust the handle of his shovel through the valve’s handle and heaved. There was a squeal of resistance, then water ran across the deck. The embers falling from Lokras hissed out as they hit it.

“What then?” Lokras growled. “You will destroy me, sacrificing yourself and your shipmates for the good of all humanity?”

“Oh no,” Tam said. He pulled his sleeve up his shoulder, revealing a scar in the shape of a blinded eye. “How do you think I survived Blind Gorash and the Colossus? I want to make a deal.”

“And your shipmates? Your leaders?”

“Sod them. They’ve had me shovelling coal for forty years.” Tam gestured to the other boiler men, who hesitantly rose to their feet, their expressions ranging from confusion to excitement. “We’re ready to make a deal. But you’d better offer us something good, and offer it fast.” With an arm grown weary with age, he swung his shovel, tapping it against the water valve. “Time ain’t on either of our sides.”

As Lokras opened its mouth to plead, the boiler kept burning and the ship kept moving, steaming towards war.

If you enjoyed this story then you can get more like it by signing up to my mailing list. You’ll get a free e-book as well as stories straight to your inbox every week.