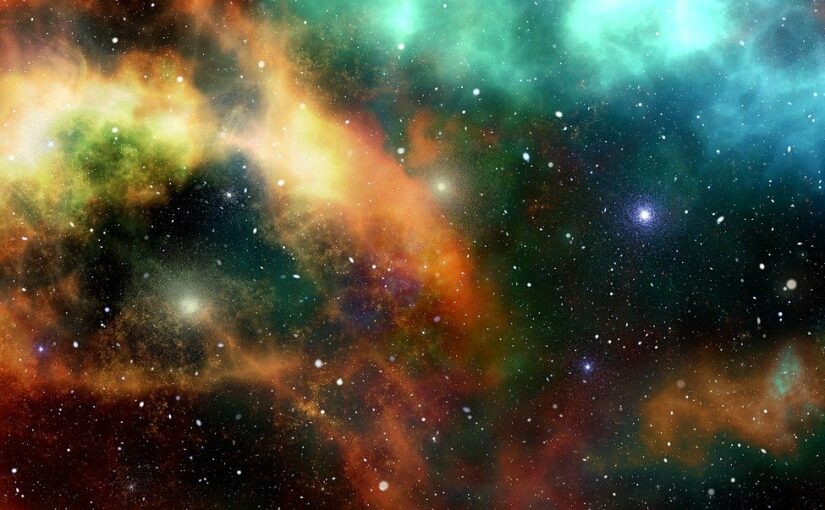 Hi mum, it’s Angie. I’m recording this one later than usual, hoping I can get it into a civilian data beam back to Earth. I meant to record it at the jump gate terminal outside of Centauri, but I got distracted, and you’ll never guess who by – cousin Dioni!

I should probably tell you about the terminal first. This place is amazing. There are shuttles heading to every system you’ve ever heard of, and a bunch you haven’t. The terminal has all these different habitat zones for different species, but they’re separated by glass, so that you can see each other. There are even speakers with translation systems in the glass. I had a long chat over coffee with a guy who has tentacles for a head. I say over coffee, he was inhaling purple stimulant smoke while I had coffee. He was as fascinated to hear about Earth as I was about his home world. It was intense!

But I know you, and I know you’re going to care more about Dioni than some alien, even if she did have fifty-seven eyes. The alien had the eyes, that is. The only new body mod Dioni’s got is a recording tattoo, and she said not to tell Aunt Stella, because of her Views, so forget I told you that.

Anyway, Dioni’s running one of the restaurants in the human zone here, one of those Metaphor Burger franchises. You know the ones, where the ingredients are meant to symbolise a philosophical concept or a work of art. OK, maybe you don’t know, but it’s a whole thing. Dioni says she stopped here to do a few shifts and earn more money on her way to that colony in the Regamium system she was going to join. Only it turned out that the franchise holder was leaving, and Dioni had an opportunity to take his place. The old manager showed her this data about the insane profits you can make selling burgers to travellers, and she figured, why not give it a go. She used her travel money to buy him out, figuring she could triple her money in six months, then head on to the colony like Aunt Stella wanted her to.

Ooh, and just as Dioni was telling me this, a guy with three heads came in, and then an actor out of… You know what, you won’t know the show, and it doesn’t really matter. The important thing is that Dioni has these amazing customers with stories from all over the galaxy. My mind was blown.

Where was I? Oh, yeah, well it turns out that it’s not so easy to leave this franchise Dioni’s bought into. She hadn’t paid attention to how much of a cut the company takes when she signed the contract, so she hasn’t earned what she expected, even though the place is buzzing. And there’s another big fee when you leave, which is half repayable if you leave everything in good condition, but you’ve got to have the money in the first place, and most of what Dioni earns goes on rent and visits to the alien habitats, so she can’t afford it. The whole past three years, she’s been stuck here, telling Aunt Stella that she got to Regamium so that Aunt Stella wouldn’t worry. Isn’t that wild?

Um, you’d better not tell Aunt Stella that part either. Or any of this, now I think about it. Please. But you can tell her that I saw a genuine Centauri fishman, because he stopped by right then to invite Dioni to a party.

Anyway, Dioni talked about how she couldn’t leave, and she wasn’t getting to Regamium any time soon, and it was all so sad. But then I thought, mum’s always telling me how I should help people in need, why don’t I help Dioni? She was so excited to leave Earth and go to Regamium, she should get to do that. So I offered to lend her some of the money you gave me. I hope that’s all right. I figured you’d approve, seeing as how she’s family.

Dioni couldn’t answer at first. She spotted this customer down the bar who she’d forgotten, and then she had to take a call, and sort something out with one of her staff. I wasn’t going to get an answer before my shuttle, but I said hey, I’ll delay, rebooking doesn’t cost too much. And then Dioni stopped what she was doing, and she said she didn’t want the money. Can you believe that? She said it was really kind, but she got herself into this mess, she had to get herself out. She’s so much more responsible than she used to be.

Then a ship from the Far Stars came in, and all these pioneers arrived on their month off, and they all knew Dioni. I sat and listened to their stories for hours, and Dioni listened too while she worked, and it was amazing, the places they’d been and the things they’d seen. Then I had to get my shuttle, because sure I’d delayed it, but that job’s still waiting for me on Signus.

It’s sad that Dioni never got to Regamium. If Aunt Stella ever finds out, she’ll be really disappointed. So maybe don’t tell her any of this. Can you do that?

Hm. Maybe I just won’t send this. Not for a while, at least. Not until Dioni gets to Regamium.

I tell you what, though, she’s great at putting on a brave face for the customers, even though she’s stuck there. I’ve never seen anyone smile so much.