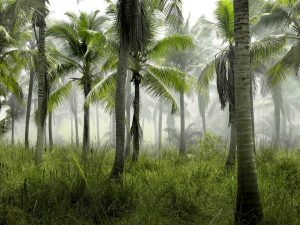 Mag stared out the cracked window at the lush greenery of the jungle. Across the cabin of the crashed shuttle, Laslo was still dicking around with pieces of the control console, trying to get the communicator to work.

“You’re better with this shit than me,” Laslo said. “Don’t you want rescuing?”

“You know the odds of contacting a passing ship, even if we can fix that?” Mag shook her head. “And if you haven’t fixed it after three days…”

“Got to keep up hope,” Laslo said.

“I’m too hungry for hope. Going to go out and find something edible.”

“Careful. There’s got to be a reason no-one’s settled here.”

Mag drew the stun gun from behind her seat. It was meant for tackling customs agents if the ship was boarded. It should be powerful enough to tackle a good sized predator, if there was one out there.

The airlock hissed open and the fresh smell of plant life hit her. This place must have been seeded by humanity at some point, but it had evolved a long way since then. None of the plants around her looked familiar, from the towering grey-trunked trees to the short, spiky ground plants.

She strode directly away from the ship, making sure that her shadow was always on the left. After ten minutes, she saw something like a banana tree, hanging with clusters of long, pale orange fruit. The sight was promising enough that it made her stomach rumble.

As she approached the tree, her foot caught on a purple creeper. She tried to shake it loose, but the plant clung to her, spikes digging into her boot, making her stumble and swear.

“Stupid thing.” She bent to pull the creeper off of her. But as she grabbed hold of it, another tendril snaked out and wrapped around her wrist.

Mag jerked back in alarm. The creeper’s spikes drew blood from her wrist. The sudden movement tore her foot free, but left deep scratches in the surface of her boot.

She spun around, seeing more creepers closing in. On instinct, she raised the stun gun, then realised that she couldn’t threaten plants. She shoved the gun back through her belt.

Her stomach was still rumbling. She ran over to the tree and grabbed hold of one of the clusters of fruit. Steadying herself, she stamped on a creeper as it came near, and sap oozed from the broken tip. Then she yanked on the clump of orange fruit, tearing it free from the tree.

A long, loud creak shook the leaves. Branches shifted above Mag’s head, sweeping down toward her.

With a yelp of panic, she turned and ran, clutching her prize to her chest. A creeper caught her ankle. She yanked it free with a sound of tearing cloth, and pain was followed by the heat of blood running into her boot.

Branches and creepers lashed at her from every direction. She ducked and jumped, twisted and turned, just managing to keep clear of them. The shuttle came into sight, a gleaming mass of silver amid the broken trees of the crash sight. She was almost there.

A creeper tore across the fruit in her arms. Juice ran from the banana-like shapes, staining her fingers and her suit a bright orange.

Where it touched her skin, the juice burned. It was a slow heat at first, but growing until it became as fierce as flames. She flung away the fruit and shook her hands. Juice spattered across a creeper, causing a hiss and a trickle of smoke. The fiery pain in her hands eased.

Distracted by the juice, she didn’t notice the last creeper as it lashed out at knee height. It was thicker than the others, and the force of the blow swept her legs out from under her. She slammed face-first into the ground and tasted blood.

The airlock was mere feet away. She scrambled towards it on hands and knees. But the creeper was around her waist, dragging her back.

Frantically, Mag fumbled beneath her, trying to draw the stun gun from her belt. Spiked leaves dug into flesh as she was hauled away from the ship.

At last she got a grip on the stun gun. She pulled it out, pointed it at the creeper, and fired. Electricity danced across the plant. Her skin tingled at the charge. Then the plant let go.

Mag stumbled to her feet and ran headlong into the airlock. She punched the button and the door slammed shut behind her.

Inside, she wiped off the last of the juice with a corner of her shredded shirt.

“Out of the way,” she said, shoving Laslo aside and reaching for the parts of the radio. “I’ve got to get us the hell out of here.”

If you enjoyed this story, you can find more science fiction here or get a free e-book by signing up to my mailing list.