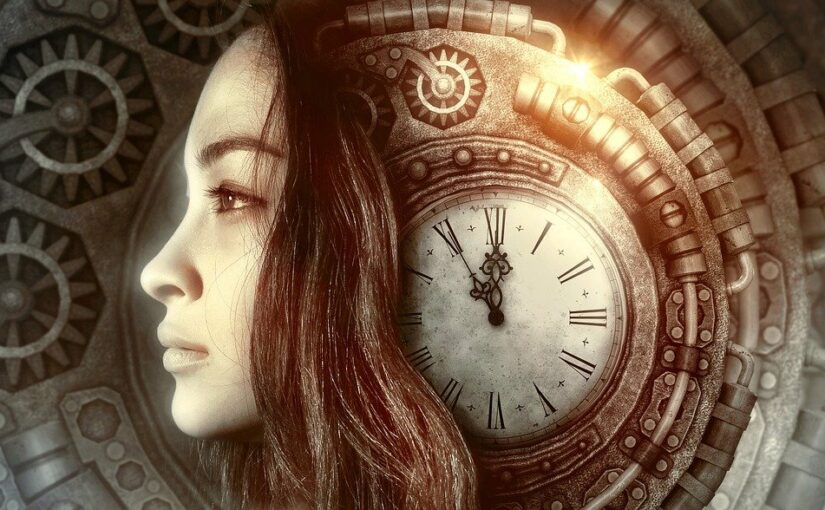 Sister Savrin set aside her tool belt and placed the chipped gearwheel reverently on the table in the corner of her cell. She closed her eyes, clasped her hands together, and bowed her head in a moment of prayer.

According to doctrine, as espoused by Mother Superior, this gearwheel was no longer a part of God, had not been since Savrin removed it from His great mechanism in the heart of the cathedral. The new, undamaged gearwheel was a part of God now, and would help in performing His divine calculations, while the old one was drained of divinity, mundane scrap to be discarded.

But those scraps made Sister Savrin feel closer to Him. The small spring that she carried in the folds of her shift was an anchor securing her soul through the storms that raged through her heart.

There was a knock on the door. She eased it open just a crack, and peered out at Mother Superior, craggy faced and frowning.

“Sister Savrin,” Mother Superior said. “May I come in?”

To say no would raise as many questions as it avoided. Could she put it off until she had time to come up with an excuse?

“I…” They had brought her into the order for her gift with machines, not with words.

“Sister Bonopass says that you haven’t been bringing scrap to the smelter after tending to His mechanisms. What have you been doing with it?”

“You can’t go selling machine parts to the faithful as relics. That was what got Brother Castazzo into trouble, remember?”

“Then there won’t be a problem. Now please let me in.”

That please was accompanied by the pressure of Mother Superior’s substantial boot against the bottom of the door. Savrin lacked the courage to resist authority with words; physical resistance was beyond unthinkable. She stepped back and bowed her head, ashamed, as the door swung open.

“Oh, Savrin.” Mother Superior stared at the pile of broken and rusted machine parts, Savrin’s own private chapel. She didn’t sound angry, just disappointed, but that made Savrin feel like an invisible key was winding her guts like a spring. “What is this?”

“Savrin, this is not God. It is just some pieces of metal.”

“Of course it’s God!” Her voice rose, becoming to big for the stone-walled confines of the cell, spilling out like a tide into the corridors beyond. “God is perfect and his pieces are too, even if they’re broken. They came from inside him, and everything in God is divine. How could it stop being holy, just because it stopped moving?”

“Sister Savrin, you know this. God is in the whole, not the parts.”

“God is a pattern, a process-”

“God is a mass of gears that spits out commandments. If those parts aren’t holy then nothing is.”

“Sister Savrin!” The Mother Superior looked appalled. Behind her, other brothers and sisters had gathered in the corridor, staring in shock at what they heard. “Are you denying His divinity?”

“If your rules are His rules, then yes I am!”

The brothers and sisters stared, white-faced. The only sound was the soft, distant thud of God’s master wheel, the heartbeat of all their lives.

“Sister Madack, Brother Jerroff,” Mother Superior called out, her face fixed in cold fury. Two burly siblings stepped out of the crowd. “Take Sister Savrin’s robes and escort her from the cathedral. She is done here. And call for Sister Bonopass to gather this scrap.”

Savrin wept as she was dragged from her cell and stripped down to sandals and shift. She had lived for years among the holy order, and now her whole life was being wrenched away. Some of them watched in silence as she was marched down the nave to the great iron doors. Others, some of them men and women she considered friends, jeered at her miserable fate. Then the doors swung open and she was cast out into the cold.

She stood stunned in the middle of the mud road, while passing strangers stared at her through the pouring rain. She had prayed so hard, but God had ignored her, let her be cast out on her own, while the fragments she had believed were relics were melted down to make nails.

Mother Superior was right. There was nothing divine in those pieces.

Mother Superior was wrong. There was no God at all.

Then Savrin felt something, wrapped in a fold of her shift. A rusty spring, its end twisted, a piece she had taken the first time she ever maintained the great machine. Touching it, she felt peace flow across her like the dawn, chasing away the shadows of fear and grief. Like the saints in old stories, she had been cast out by the ignorant, but God had left her a sign, a part of him that would travel with her.

Sister Savrin straightened her back, wiped the tears from her cheeks, and strode out into the world. Whatever storms raged, this small iron anchor would keep her soul secure.