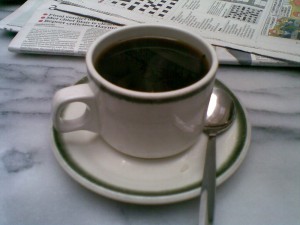 I’ve had some of my best ideas while drunk. But as I stepped out into the purple light of an alien dawn, the booze wearing off and a headache kicking in, I started to suspect that this wasn’t one of them.

It had been surprisingly easy to make contact with the underground community of unregistered clones and soft-hearted sympathisers. Flashing the vat scar on my arm proved my credentials and got me through some awkward online chats.

The embassy’s security staff could have done it quicker, if they’d known that there were clones involved in stealing our data. But the only reason I knew was that one of the thieves shared my face, and that wasn’t a fact I wanted to share.

The meeting was scheduled for early morning at a human café. By the time I got there I’d had a long, tense, sleepless night. I managed a conversation with the waiter in Chinese, but the look on his face told me that I wasn’t doing well. Listening to the voices of the passing crowd, from familiar bipeds to undulating twelve-foot worm-men, I failed miserably at my usual game of spot the language.

At least I had coffee to pick me up.

An hour later, I was on my third cup, twitching like a flea-ridden dog, and increasingly certain that I’d been stood up.

Then I noticed the k’kiri sitting three tables over. His red facial feathers and slender black beak had stood out when I sat down. Now he’d been nursing a plate of fried bugs for an hour while he tried not to look my way.

So they were here after all, watching me. That meant they planned to use me, not meet with me. I wasn’t having that.

I tapped the centre of the table with a bank card, settling the bill, then got up. As casually as I could with a full bladder and flayed nerves, I strolled down the street. As I rounded the corner I looked back and saw the red k’kiri peering intently at a shop window twenty feet away.

I was no spy, but anyone working on the diplomatic staff got followed from time to time, even PR officers. I followed the training I’d been given for these situations, using short streets and junctions to make me harder to follow, forcing him to get close or risk losing me.

Then I broke from my training. Instead of speeding up and heading for safety, I ducked around a corner and waited, hidden from the world in a maze of back streets and alleys.

Seconds later, the k’kiri appeared. He squawked in alarm as I leapt out at him.

I heard footsteps behind me just before the sack slid over my head. I tried to twist around then felt a jolt of pain as I was hit with something like a taser.

Someone squawked as I slid to the ground and the world went black.

The first things I noticed when I woke up were the smell of piss and the damp patch on my trousers. Next time, I’d go to the loo before anyone deprived me of control of my body.

The sack was still over my head and plastic restraints bound my hands together.

My voice echoed around a cavernous space. The noise didn’t help my throbbing head.

There were footsteps. Someone hauled me upright and yanked the bag off my head.

I was in an empty warehouse. A dozen humans and k’kiri stood watching me, along with a single tentacled jouran. The man in the centre looked very familiar.

“No-one from the embassy tried to contact us about you,” my younger clone said. “Do they even know that you were trying to meet with us?”

“Nice to see that you make the best-looking guy your leader,” I said, filling the quiet while I mustered my scrambled thoughts.

“Do they even know what you are?” he asked, approaching me. He rolled up his sleeve, revealing a scar a lot like mine.

“You’re funny.” His smile turned into an angry frown. “I’m not. Now tell me, do they even suspect that this isn’t about the money?”

I stifled my surprise, a skill I’d practised while facing journalists and other merciless predators.

“The death of the embassy’s PR officer will get a lot of attention.” He slid a wickedly gleaming knife from inside his jacket. “Especially when the autopsy reveals that you’ve been a clone this whole time.”

If my bladder hadn’t been empty, I would have pissed myself all over again at the look of gleeful menace on his face.

But something else had grabbed my mind, something that might just get me out of here in one piece.

If I was very lucky.

“I’m good at attention,” I said. “That’s why I’m here. I want to help you get the coverage you’re after for your cause.”

“What do you know about our cause?” he asked sharply.

“I know that I have to hide who I am,” I said. “And I know that would be different in your world.”

It was pure speculation. But he had the gleaming eyes and sweaty palms of a revolutionary, and that made it a safe guess.

“Why should I trust you?” he asked.

“Because I have skills you want,” I replied. “And because if I fail, you can go back to plan S for stabbing.”

He brought the knife level with my guts and looked me in the eye. That mad gleam was still there.

“Alright,” he said as he severed the bonds around my wrists. “Let’s give this a try.”

And so we continue with Diplomatic Baggage, a tale of lies, diplomacy, and uncomfortable situations. You can find the previous stories here:

What Lies Behind Us – On the alien planet of Herrje, Julian Atticus rushes to save the British embassy from a public relations disaster.

The Best Laid Plans – An encounter at the spaceport ruins Julian’s day.

Friday Night on Herrje – The fallout from a theft ruins Julian’s Friday night.

If you enjoyed this then you can read more about Julian Atticus, cynical PR man of the future, in my collection Lies We Will Tell Ourselves. And come back next week for the next installment, because you just know things are going to get worse.