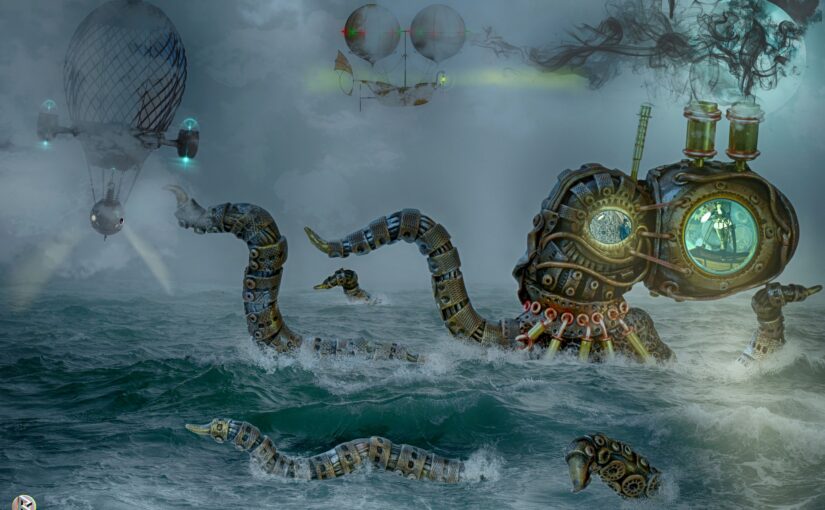 Tentacles of interlinked brass rose from the water of the harbour, their tips waving in the air. At their centre, steam poured from a pipe in the back of the squid’s gigantic, gleaming head, while its expensively-dressed driver waved out of a porthole eye.

“We should keep moving,” Elizabetta said, straightening her hat and trying to ignore the twitching in her legs. The mechanisms inside the hat shifted and a miniature train rolled out around the brim, trailing steam and delighting a nearby child. When Master Ronvolio didn’t respond, she tugged at his sleeve. “You’re due at the academy, Master.”

“That’s one of mine!” Ronvolio exclaimed in a voice like a poorly-maintained gramophone. “How in all the circles of Hell did they get hold of it?”

“Perhaps they just had a similar idea to you,” Elizabetta said, trying to draw him away from the dockside. “Come on, your audience is waiting.”

“Similar idea my arse. I built that thing just before my etheric communicator. How did they get hold of it?”

Elizabetta glanced around nervously. She didn’t want to be having this conversation at all, but at least at the workshop she could have controlled it, could have let him wear himself out and forget the issue. Here, the celebrated inventor was drawing a crowd, and it was just a matter of time before someone arrived who could tell him the truth.

“Maybe you sold it?” she suggested. “You have been forgetting more things lately. Like your midday meals, or that painting of Prince Arducio last week.”

Ronvolio glared at her. “How long have you been my apprentice, Elizabetta?”

The word “apprentice” was like a spanner tightening the screws on her frustration. She had been with the Master far too long to still be an apprentice. He should be calling her his assistant by now, perhaps even his workshop manager. That was the job she had been doing for most of a decade, and she deserved some acknowledgement, just like she deserved to be better paid.

“And in all that time, have you ever known me to sell one of my creations to these… these… these buffoons?”

He gestured toward the red-faced young nobleman climbing out of a hatch in the top of the squid, waving in self-satisfaction at the gathered crowd.

“No, master,” Elizabetta snapped. “And that’s why you’re constantly poor.”

“Imagine how much better off we would be if you sold just a few of your works to the nobility, instead of displaying them in shops and public parks or selling them to labourers’ collectives for a fraction of market rate.”

“This is a matter of principle. My art and my devices go where they are needed, to lift up the common man and woman.”

“What about lifting me up? Or just filling my stomach?”

Ronvolio’s eyes narrowed. Elizabetta shrank back from him, and the hat shifted, internal counterweights keeping it upright at all times. She swallowed, remembering too late that Ronvolio was absent-minded, not a fool. But she was committed now. A long-simmering pot had reached the boil.

“Of course I did. Your clothes were threadbare. You needed new coats for the winter and a respectable suit to lecture in. We needed coal for the stove and gears for the machines. You think materials just fall into your life by magic? You needed this!”

“Don’t you presume to tell me what I need, Apprentice. This was my decision to make, not yours. You have perpetrated a theft, and falsehood, a fraud of the highest order. I should have the watch slap you in irons.”

Elizabetta opened her mouth to defend herself, but the sight of his fury, so utterly uncharacteristic, turned the words to dust in her mouth. She had betrayed the man who had fed her, sheltered her, taught her since she was twelve years old. It was an unworthy act. She shut her eyes and gave a small nod.

There was a click, then a hand settled gently on her shoulder. She opened her eyes and saw Ronvolio holding an enamelled tube with an etheric antennae at one end and a red button at the other. He smiled at her softly.

“Never mind, Elizabetta,” he said. “I am prepared.”

He pressed the red button. Out in the harbour, the mechanical squid tremble, seeped steam, and began to fall apart, pieces of tentacle splashing down into the waves. The driver leapt clear just before its boiler detonated, hurling out chunks of glass eye and brass skin.

The crowd gasped, then cheered at the spectacle. Elizabetta stared at her Master, who pocketed the tube.

“I build such a solution into all of my devices these days,” he said, “in case of theft.”

“All?” Elizabetta’s trembling hand went to her hat, where the miniature steam train was once again hurtling around the brim.

“Most of them, at least.” Ronvolio winked. “Though I am a little forgetful about which.” He pulled a watch from his pocket. “Speaking of forgetfulness, aren’t I due to deliver a lecture soon?”

“Yes, Master.” Elizabetta took him by the arm and led him away. Behind them, a dripping young aristocrat emerged from the water, while behind him the last remnants of the squid sank in a great gout of steam.