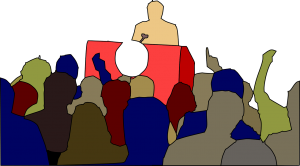 Words define us. They empower us. And sometimes they drop us in the shit.

As I approached the embassy’s press podium, I looked out across the faces of human and alien journalists. The words I said next would shape my life and my country, for better or for worse. In thirty seconds time, there would be no going back.

The scar on my arm itched. The room was too warm, making me sweat. I almost tripped over myself on the way to the podium.

“It’s going to be alright,” I said, trying to persuade myself.

Then I realised how close I was to the microphone. I shut my mouth, pulled a serious face, and looked down at the notes on my tablet.

“Thank you for coming,” I said. “I’m going to start by reading a statement from Ambassador Canning.”

The statement was written by me, of course. Canning was smart enough to know her limitations and my strengths.

“Over the course of recent days,” I began, “we at the British embassy on Herrje have made a disturbing discovery. We have been given evidence that our own government has revived its cloning program and conducted a series of immoral experiments. In doing so, they have broken the law and ground salt into the wounds of cloned people who, for the supposed public good, have long had their rights restricted to deter exactly these sort of experiments.”

The journalists stared at me in stunned silence. They were used to embassies briefing against their own governments, but quietly, off the record, in back rooms and shadows. This was unprecedented.

“I have reached out to opposition parties and prosecutors back in Britain,” I continued. “We do not yet know how we will go about bringing the government to justice. Until we do, we will be relying upon the authorities here on Herrje to protect and support the staff of this embassy, keeping them safe from further criminal acts. I thank you for your kindness and support.”

I switched off the tablet and looked around.

“That’s the end of the ambassador’s statement,” I said. “Any questions?”

Desperate to get this over with, I pointed at the first journalist to raise their hand. It was only as she stood that I realised it was Saluc, the k’kiri who I had tricked out of her scoop a week before.

The room felt hotter than ever.

“Mister Atticus,” Saluc said, the feathers around her face splaying out indignantly. “We recently learnt that Britain stole cloning technology from the k’kiri. Would you care to comment on the connection between this and your revelation?”

I’d hoped to start with something less awkward. My first instinct was to deflect and then call on another journalist.

But if this was to work then I needed to earn the trust of journalists like Saluc, ones who would run with the story like they were picking a fight.

I had to face the awkward questions.

“Why don’t you skip the easy part and go straight to the follow up?” I asked.

Journalists stared at me in confusion. Cameras turned on Saluc.

“Alright,” she said. “You, Julian Atticus, spun the story about the tech theft to cover for your people. You’re picking a fight with your own government, and we only have your word on why. Why should anyone here believe that you’re the honest party? Why should we believe that this is about real reform?”

All the cameras turned on me. All the hostile glares of journalists who had been caught out by spin before. They might not have the courage to risk calling it out publicly, but they relished seeing someone else make me squirm.

Immediately, I could imagine the coverage. Descriptions of a war of words within the British establishment. Confused and nuanced stories that took the pressure off the government and gave them room to manoeuvre.

I couldn’t risk it.

I rolled up my sleeve, revealing my scar.

“This is a souvenir of the cloning vats,” I said, holding out my arm for the cameras. “If something doesn’t change, then I’ll be out of a job and into a prison cell for the lies I’ve told just to live a normal life. So why should you believe that the people I’m working with are about real reform?”

I raised my arm. A dozen camera flashes made the scar stand out, pale and jagged.

“Ms Saluc,” I said as the k’kiri approached my table at a pavement cafe. “Will you join me for a coffee this time?”

“Why not,” she answered, taking a seat. Her beak hung a little open and her eyes narrowed, the k’kiri equivalent of a smile.

“Thank you for your article,” I said. “It got us the help we need here while we wait for change back home.”

She tapped a button in the centre of the table, placing her order.

“You did something brave,” she said, glancing at my arm.

I’d started keeping my sleeves rolled up for the first time in years. The scar lay exposed, covered by neither cloth nor lies. It was liberating.

“Brave would have been confessing years ago,” I said. “This was just survival.”

“What about the people who stole your data?” she asked. “The ones who triggered these events?”

Across the road, a familiar face went by. For a second, I felt like I was looking in a mirror, seeing a version of myself caught midway between gratitude and rage. Then he moved on.

I shrugged and ordered myself another drink.

“Sadly, we have no way to track them down,” I lied.

That’s it for this little sci-fi series. Next week I’ll be starting on something new – historical fiction. So stay tuned for more, and if you like what I’m doing here then please share it with a friend.