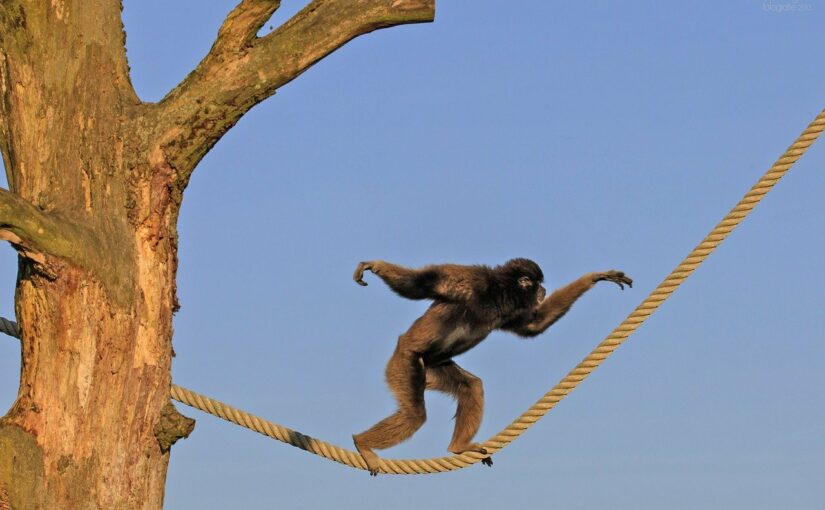 Albert Rochford, pale as the ghost of a ghost and tired as a toddler at bedtime, looked up from his desk as a man walked into the offices of the Overhead Cable Tramway Company. The man was dressed in a grey suit with a grey bowler hat and carried a briefcase in a leather so pale that it was almost grey.

“I am John Smith,” the man said. “City auditor number two seven three. The mayor’s office sent me. I hear that you have a problem with monkeys.”

Albert groaned and pressed his face into his hands. “You’ve heard.”

“How could we not? The tramway has ground to a stop.  No one can get to work. What is going on, Mr Rochford?”

Albert’s seat scraped back across the floorboards. He pushed himself to his feet and trudged to the window. Smith joined him, back so straight it would have made a ruler jealous.

The rail yard stretched out below them, hundreds of square yards of workshops and sheds, with engines and passenger panniers sitting out between them. To one side, smoke billowed from the generator house. Overhead cables stretched out in every direction across the city, like the work of an over-excited spider.

“We got the monkeys back when the trams ran on steam,” Albert said. “Smart little buggers, right handy on the cables. We trained them to keep the tracks clear, fix wires, free up carriages that got stuck, that sort of thing. They were quicker and more confident than our staff when it came to working on the cables, and we could pay them in fruit. The city’s full of fruit. Folks grow it on their balconies, in their back yards, in rooftop gardens. There’s all them orchards out past the old walls. Do you know how easy it is to pay someone in fruit around here?”

“I am an official auditor, Mr Rochford. I am familiar with the city’s economy.”

“Right. Yes. Well, see, turns out the monkeys got to understand it too. They realised they could get to them rooftop gardens from the cable ways and take fruit for themselves. Some of them stopped working for us, formed their own little tribes out on the cables. The others were still working, and we didn’t want no fuss, so we compensated the owners for the lost fruit and that were that.”

“Monkey tribes have been living wild above the city all this time?” Smith raised an eyebrow.

“Aye, but that weren’t a big problem. Not until the piracy started.”

“Piracy?” The whole side of Smith’s face twitched.

“Turns out the monkeys had worked out how to operate the engines. They stole a couple from the yard, started using them to attack other carriages and steal off the passengers. Then they used the money to buy more fruit.”

“Of course.” Smith’s mouth curled in an expression that Albert couldn’t read, but that made him very nervous. “And you didn’t call in the authorities against these piratical monkeys?”

“We sent some of our own lads to get them. Only, the thing is, there’s a reason we was using monkeys for maintenance. They really know how to move on them cables, and our lads couldn’t handle a fight out there. We didn’t want to bother the mayor…”

“Aye. So we paid the monkeys off.”

“Let me get this straight. A tribe of wild monkeys attacked your passenger cars, and you rewarded them with more of what they wanted?”

“Ah, but it was a holding measure, see. We knew we were getting them new dynamo-electric cars. They go faster and they’re not what the monkeys are used to. We thought we could run those hairy, banana-eating buggers off the tracks.”

“I take it from your tone of voice that this did not occur?”

Albert slumped, his head pressed against the window.

“They stole the electric engines right out of the yard. Now they’re racing each other along the cables, hooting and howling and throwing peach pits at anyone who gets near. Do you know how hard a monkey can fling a peach pit, Mr Smith? Those buggers are deadly.”

“Let me see if I understand this. The city’s primary transport network has been hijacked by pirate monkeys who are now riding the rails, holding racing parties and feasting on the finest fruit this city has to offer?”

Smith opened the window, reached out, and tested the tension in the nearest cable. He set his bowler hat down neatly next to his briefcase, took off his tie, and started unlacing his shoes.

“Are you going out there to get them?” Albert asked, wide-eyed. “Are you some sort of secret assassin who’s going to clear the rails for us?”

“No, Mr Rochford,” Smith said, climbing barefoot through the window. “I am an auditor, a clerk, a counter of beans. I have spent my whole life in that dry, sensible world of numbers and ledgers.” He took hold of the cable, then swung his legs up. “Today, I want to be part of a monkey pirate racing party.”

Grinning like a man who had never believed in rainbows but now saw the pot of gold gleaming at one’s end, Smith scrambled away.

Some days, you’ve just got to write the weird thing to get it out of your system.