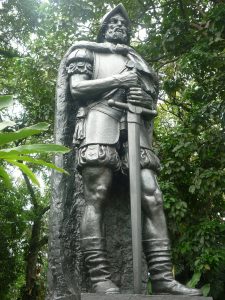 “…and the emperor Atahualpa struck the shining shadow with his war club. It fell screaming to the ground. The emperor kicked it back into the sea, and the world was safe again.”

Bachue finished her story and pulled a sheet up over her children. She smiled at them and they smiled back. Days like this made her happy to be alive.

“Are the shining shadows real?” Illapa asked, stifling a yawn.

“Very real,” Bachue replied. “They creep into Tumbez at night to eat little boys who don’t sleep when they’re told to.”

“But it’s the middle of the day,” he protested.

“And you were up all night. Now sleep.”

Voices in the street made Bachue turn her head and look out of her rough stone hut. Cuca stood in the doorway, her red and white tunic dishevelled, her eyes wide with excitement.

“There are strange men at the dock!” she said. “Their chests gleam. It is said that they have come across the sea!”

“Shining shadows!” Illapa said, sitting upright in alarm. To either side, his little sisters stirred and clutched at the sheets.

“Just visitors,” Bachue said, regretting her choice of story. “There are no shining shadows.”

“I made them up. There were rumours of such men further north and I thought it would make a fun story.”

“But it’s real!” Now all three children were sitting up, wide-eyed and staring. How would she ever get them to sleep?

“What if I go and check?” she asked. “Like when you thought there was a jaguar behind the house. If I see them and they aren’t monsters, then will you settle down and sleep?”

“Could you keep an eye on them for a little while?” she asked.

“Of course,” Cuca said. “But come back before the strangers go – I want to see them again.”

The path down to the docks was steep and well worn. Halfway down, Bachue emerged into the town square, a space for trade and for gossip, its packed dirt surrounded by the largest houses with the best thatch.

In the centre of the square, the town guards stood in their padded cotton armour, proudly holding spears tipped with stone or copper. Opposite them stood the strangers.

There must have been two hundred of them. Every one gleamed in the blazing afternoon sunlight. Some had silver chests as hard and smooth as lobster shells, with matching helmets. Others wore shirts of tiny glistening rings. Their clothes were shaped to fit their bodies in a way she had never seen before. Many of them carried sacks.

As one of the strangers talked with Maita, the town’s headman and leader of the guard, Bachue stood, awestruck by the sight.

Suddenly, one of the strangers yelled. They dropped their sacks, drew weapons from their belts, and ran at the guards.

The weapons were so slender that they should have snapped from a single blow. Yet they seemed imbued with some sort of magic. They shone silver as they sliced through the guards. Blood sprayed as the town’s defenders, futilely flailing with their spears, were cut down.

Screams rose from the crowd that had been watching the meeting. As people turned and ran, the strangers pursued, cutting them down.

Bachue ran, but she could hear them coming. As she rounded a corner, she saw a heap of refuse, scales and guts piled up between the houses of fishermen. She flung herself into the disgusting heap, burying herself in glistening entrails.

Her heart hammered. She felt so exposed. This couldn’t possibly be a good enough hiding place.

But the strangers ran past, still cutting people down. She heard the screams of the dead and dying, the grunts of men forcing themselves on women, the weeping of their victims. She was terrified for her children, but no matter how hard she tried, she couldn’t bring herself to leave her hiding place. She was too scared.

At last the sounds of violence died down. The strangers, their sacks bulging, headed down to the shore and away.

Bachue emerged from her hiding place. With trembling steps, she walked up the street back to her home. In her mind, she was already seeing the worst.

Cuca sat in the doorway. Her tunic was torn and dirty. She stared dead-eyed at the ground.

“I kept them busy,” she said, her voice hollow. “They did not touch the children. But they took everything else.”

Bachue rushed to the straw mattress in the corner of the room. She swept her weeping and terrified children up in her arms.

“I’m sorry,” she said, crying with shame at having left them so vulnerable. “I’m sorry.”

“They are,” Bachue said. She needed something, anything she could say to comfort them. “But so is the emperor. He will protect us. You will see.”

She sang to them and soothed them until they finally fell asleep. Then she went to the doorway and sat down beside Cuca.

“I’m going into the jungle,” Cuca said. “This isn’t a safe place any more.”

“The jungle isn’t safe,” Bachue replied. “At least here we have walls to protect us from the weather. At least here the emperor can bring his army to fight them.”

“You believe that the emperor can save us from this?” Cuca asked with a hollow laugh.

“He has to,” Bachue replied. She looked at her sleeping children. “Someone has to.”

That night, she slept with her husband’s old war club by her side. She had never seen the emperor but she had seen the monsters from the ocean. The world was darker and more uncertain than it had been.

She was a mother and she had a duty. Next time she would not hide. She would keep her children safe.

The story of how Spanish conquistadors conquered the Incas is usually told in terms of the people at the top. The Pizarro brothers’ grab for wealth and power. The Emperor Atahualpa’s attempts to appease them. The struggles of his successors.

I want to look at that from a different angle. So this is the first in a series of stories about ordinary people’s experiences during those shocking events. How they suffered, how they struggled, and how they kept their civilisation alive. It’s going to be bleak at times, but there’s hope in there too.

Come back next week to see what happens as the conquistadors’ ambition grows. And if you enjoyed this story, please share it and consider signing up to my mailing list, where you’ll get a free e-book and stories straight to your inbox every week.