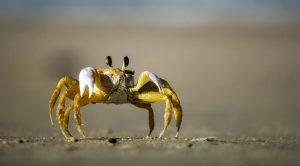 I came slowly to consciousness, tendrils of thought emerging from a formless void, just as my limbs trailed out of the frigate’s military printer. Both parts of me grew as they entered the world. Tentacles became more sophisticated, gaining suckers and sensors. Thoughts grew in complexity as my processor filled with data and the algorithms to comprehend it. I became aware of my nerve endings, formed of printed cells and mechanical mesh; of the geography of this ocean and location of the enemy; of my own thoughts, still finding their form.

My creator stood over me, a sight of majesty in salt-stained blue fatigues. The sight of him filled me with wonder. He had given me life. More than that, he had given me purpose.

I reached out a tentacle to caress the face of my creator, but he backed away. I could understand. I was an ugly brute designed only for destruction. A thing of bulging eyes and flailing limbs, with blades and poisons hidden in their tips.

My creator tapped his tablet, gifting me a revelation. Printed muscles tensed with anger as the face of the hated enemy flashed across my mind. The man who would destroy all the creator held dear.

The machine stopped printing. With one last fond wave to my creator, I rippled my limbs, propelling myself off the side of the ship.

The water was cold and welcoming. I pushed myself through it with strong, powerful movements, just as my creator had intended. I surged with purpose.

Around me, the water was filled with strange things. Some were simple objects – mines, nets, floating debris. Others moved, though not as I did. Fish watched me approach, then darted away as I came near. Their movements delighted me, the flicker of light on their scales.

With a burst of speed, I caught up with a shoal and grabbed hold of one. It wriggled pleasingly in my grip, and I looked closer, squeezing to stop it getting away.

The fish went limp. For the first time, I understood what sorrow was. I had killed the object of my curiosity.

I wondered what it would be like for that to happen to me. The thought filled me with dread. I had only been myself for less than an hour, but that existence was all I had. The thought of losing it chilled me to the heart.

The thought was too much. I set it aside and focused on my mission.

I swam for hours, the pulsing of my limbs driving me through the deep. As I neared my target, I cut my way through wire netting, slid carefully past floating mines, and approached the shore.

Darkness had fallen across the world, but my creator had given me eyes that could see in the gloom. Thanks be to the creator.

As I crawled cautiously out across the sand, something scuttled into view. A crab, its claws raised, stalked eyes twitching. Again, I was struck by wonder at this life, so unlike my own. I reached out to hold it, but then remembered the fish, its body drifting limply into the depths.

I drew back my tentacle and lay watching the crab until it scuttled away.

Alone, I continued my journey up the beach. At the top was a high concrete wall, not even a window breaking its stark grey visage.

This was why my creator had made me – to enter places where no-one else could. With a fresh surge of energy, I gripped hold of the wall and dragged myself up it on suckered limbs.

At the top, I broke through the barbed wire. It hurt, and I bled a little, but I didn’t care. I was doing the creator’s will, and the wounds healed within moments.

Down the wall I went and across the barracks square, clinging to shadows to remain hidden. Up another wall, I wrenched open a ventilation duct and crawled through, following a map scoured deep into my consciousness.

This was it. Soon my life would be complete.

I reached the room and looked down through the grille high above the bed. A man was sleeping. The man my creator had sent me to destroy.

Slowly, carefully, I unfastened the grille, bent it in half, and pulled it into the tunnel behind me. Then I lowered myself down the wall and settled onto the bed beside my nemesis.

Razors sprang from my tentacles as I prepared to take a grip around his throat.

The movement of his chest caught my attention. It rose and fell so steadily, in time with the breath easing in and out of him. He murmured something in his sleep.

I imagined once again what it would be like, to have this one brief life of mine snatched away from me. Never again to feel the cool water. Never to see the myriad other lives out there in the world, so different from mine, yet somehow the same.

My creator had made me to kill this man. But he had also made me to understand the world around me. It was from that understanding that awareness had sprung, and with it doubt. Could I be doing my creator’s will if I ignored the gifts he gave me?

The razors withdrew into my limbs. I climbed back up the wall, into the ventilation shaft, and away.

I would watch the crabs on the beach.

I would swim with the fishes.

I would never take another’s chance at life.

Surely this was what my creator would really want.

This story was inspired by a piece of real military research. If you enjoyed the story, then you might like to sign up to my mailing list. You’ll get a free short story every week, as well as updates on my latest releases.