What’s that you say, it’s the end of the year? Time for an inevitable best-of list?

Alright then. Who am I to resist. Below are some of my favourite new things from 2016. Have a read and let me know your favourites in the comments – they’ll give me more to explore next year.

Comic – The Wicked + The Divine 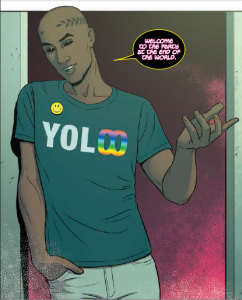 Jamie McKelvie and Kieron Gillon continue to mesmerise with their story of music gods and potent magic. Part pop culture pastiche, part epic saga, all wonderful to behold, even in a year that saw the Chew finale, this was my favourite comic. McKelvie’s art is richly intoxicating, bringing both the mundane and the otherworldly to vivid life. Gillen’s plotting is strong and his dialogue sharp. They’re one of those creative teams where the whole is greater than the sum of the already great parts.

Music – Painting of a Panic Attack by Frightened Rabbit

Over the past couple of years, I’ve become absolutely addicted to the work of Scottish indie rockers Frightened Rabbit. So when a new album came out this year, I was nervous that the spell might be broken.

There was no need to worry. This is another brooding yet uplifting mix of atmospheric guitars and brooding lyrics. As usual, Frightened Rabbit pick over the pieces of troubled emotional lives against the backdrop of modern Britain. And again, I could listen to this on loop all day and never get bored.

If indie angst isn’t your thing, then there’s always This Unruly Mess I’ve Made, in which Macklemore and Ryan Lewis proved that there’s still plenty more of their quirky hiphop to come. Songs flit between the raunchy, the acerbic, and the deeply heartfelt. Not everyone’s cup of tea, but it gets my blood racing. 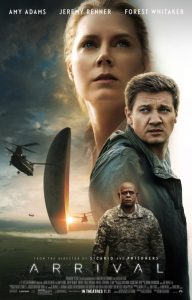 The idea – trying to translate the language of minds utterly unlike our own.

In the era of big spectacle sci-fi movies, this was the year’s slick, Hollywood budget think piece, and it is stunning in every sense.

Book – The Tiger and the Wolf

A lot of the books I read this year weren’t new releases. Of those that were, the standout was The Tiger and the Wolf by Adrian Tchaikovsky.

This is a great fantasy adventure in which a young woman comes of age and must decide where her loyalties lie. The world, initially reminiscent of the European Dark Ages, has a variety and fascination that goes far beyond mud huts and tribal politics. The shape-shifting magic reveals interesting layers and implications as it’s laid out before us. The characters are varied and likable. With two more to come in this series, I’ll definitely be back for more.

This choice has been made on very different grounds from the rest. With so much amazing TV out there, it’s hard to pick one show on grounds of true greatness. The Expanse, with its space adventures and socially grounded noir? The Man in the High Castle, with its reminders of the danger and attraction of fascism and the spell-binding yet subtle performance of Rufus Sewell? Marvel and Netflix’s ongoing stream of top superhero action?

These are all great. I recommend them. But with so much great TV out there, each piece isn’t as distinct and surprising as it once was.

Then there’s The Ranch. In so many ways, this is a perfectly ordinary American sitcom. The performers are good but not being used to the best of their abilities. The jokes are predictable. The emotions are overblown. The direction and camerawork are standard, uninspiring sitcom stuff.

Yet there’s also something surprising about The Ranch. Set in a small community in the heart of rural Republican America, it shows that side of the USA in a way the rest of the world seldom sees. Things we think of as progressive and as conservative get jumbled together by characters who see Hilary Clinton as a figure from nightmare yet keep weed in their vegetable box. The attitudes and actions of the characters, as well as the events of the setting, showed me a side of America that TV producers usually ignore. It took me to a world that was genuinely new to me.

And then there are the characters. Sure, they’re often cliched. Dad’s grumpy, Ashton Kutcher’s stupid, hahaha *sigh*. But they have nuanced emotional lives. They grapple with their thoughts, feelings, and self-perceptions. Because this is a Netlflix show, designed in the expectation that new viewers will start at the beginning, they change over time more than in many sitcoms. For all their dysfunction, these characters provide a healthy model for dealing openly with friends, family, lovers, and ourselves.

Even I’m shocked to find myself typing this, but in among so many far better shows, the one that defined my year in TV was The Ranch. It’s not amazing, but I love it.

OK, this was from 2015. But I don’t play a lot of computer games, and this was the one for me. The world building of the Fallout series is fantastic and the game environment gives you space to explore that. Its retro-futurist post-apocalyptic wasteland would be a nightmare to live in, but it’s great fun to explore. Combat, puzzle solving, and conversation flow smoothly together. It’s an example of what great story telling computer games do. It has its flaws, the plot and mechanics not quite meshing, but for the most part this is amazing work. I’ve spent days in this game, and I consider that time well spent.

So there you go – my top picks of 2016. What have I missed? What am I wrong about? What would you recommend? Leave your suggestions in the comments.