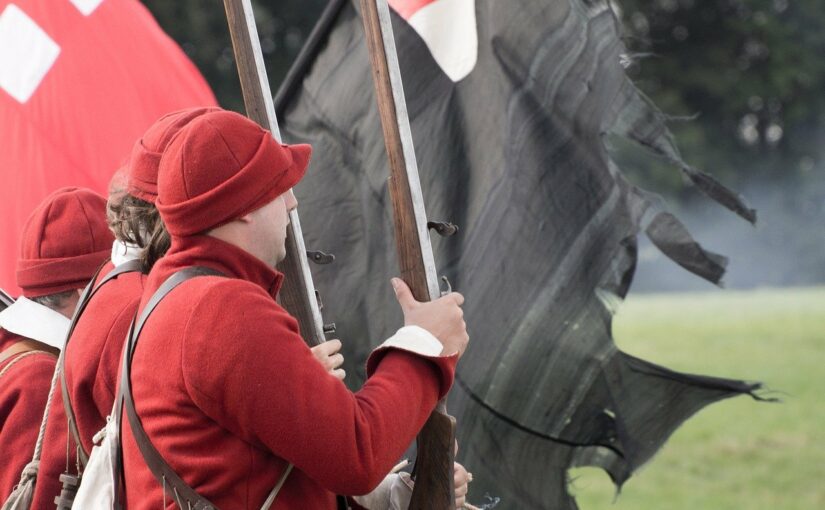 Robert shifted his musket to the other shoulder, so he could use his free hand to pluck blackberries from the hedgerows. Marching across the midlands wasn’t how he was used to spending the autumn, but it wasn’t all bad. He was doing his duty to God and to England, and there were berries in the bushes like there were back home.

Sergeant Dean was talking as they marched. Robert liked listening. Dean made sense of the war, even when they weren’t winning. He made things feel right.

“Long have we accepted the weight of injustice,” Dean declaimed in his piercing preacher’s voice. “Unjust taxes. An unanswerable ruler. The voice of parliament crushed.”

Robert nodded and popped a blackberry into his mouth. The taste was acid yet sweet, the perfect sign of the changing seasons.

He had signed up to fight because of those injustices. He wanted a fairer world, and the Roundheads had offered to make it happen. No arbitrary taxes or corruption bringing the country down. Men like Dean had made it so clear.

“God made men equal, and they should be equal again,” Dean continued. “And for that to happen, there can be no kings.”

No kings. Robert popped another berry in his mouth as he pondered that one. He had been told that they were fighting to make the king follow the rules, but what Dean said made sense. How could there be justice while one man ruled the rest?

Robert stood at the edge of the crowd, a dozen plump raspberries in his hand. He had found them on an abandoned farm next to yesterday’s battlefield, where they had been clearing away Royalist bodies. It was sad that people had to die to get justice, but he didn’t know those men, and the berries took an edge off that distant, abstract sadness.

In the middle of the crowd, Sergeant Dean was arguing with Captain Wragg. Wragg wore the smart red jacket of the New Model Army, like the rest of the men. But Wragg’s jacket didn’t fit as well as Dean’s, and he glared uncomfortably at the angry men around him.

“We cannot simply do away with monarchy,” Wragg said, waving a fistful of crumpled pamphlets. “It is a God-given institution. A righteous monarch gives the country-”

“There is nothing righteous in monarchy,” Dean bellowed. “Just an excuse to raise some above others. When Adam delved and Eve span-”

“Don’t give me that! Poetry is no response to holy scripture, which says-”

Now they were both shouting over each other. Robert wished that they wouldn’t. He liked Wragg almost as much as he liked Dean. They both said things that made him feel smart and helped him understand how he was doing right. He wanted them to get on. He wanted to hear what they both said.

He popped a raspberry into his mouth and frowned. It tasted salty and bitter, not sweet like it should.

The crowd grew louder as men at the front pushed and shoved each other. Robert dropped his berries and turned away. The arguments made him feel sad. He should go and find some new berries.

Someone was shaking Robert’s shoulder. He opened his eyes and saw Sergeant Dean standing over him, holding a lantern.

Robert shook off his blanket and joined a crowd of grim-faced, silent men following Dean through the camp.

“Where are we going?” Robert whispered.

That sounded like a good thing, but a shudder ran down Robert’s spine. Was it just the cold of night, or was it Dean’s voice that gave him a chill?

The crowd surged forward, descending on a group of dwindling campfires. The men sleeping there cast off their blankets and stumbled to their feet, looking around in confusion. They were too late. The crowd had grabbed half a dozen of them, including Captain Wragg. They punched and kicked them, driving them towards the edge of the camp.

“We should do something!” Robert said, staring in horror as the Captain was kicked through the embers of a fire pit, dragged himself to his feet, and was struck down again.

“We are,” Dean replied in that piercing, righteous voice. “These men want kings to stay above us. They’re poisoning the minds of the soldiers they lead. Can we accept that?”

But while Dean’s words usually made the world clearer, tonight it seemed more confusing than ever before.

Robert didn’t know where they were marching. Sergeant Dean wasn’t a sergeant any more, and he didn’t have time to explain the war to Robert, who got the impression that this was a good thing, though he didn’t know why. Instead, he marched with unfamiliar men, his footsteps out of time with theirs.

A blackberry bush caught his eye. Winter had almost fallen and there were few berries left, but these stood out against the leaves, swollen purple clusters promising that wonderful mix of acid and sweetness. No one stopped Robert as he stepped off the dirt road.

He smiled as he tasted the first of the blackberries. It reminded him of home, of bringing in the harvest with his father and brothers, of sitting in comfort by the fire. He missed the clarity of knowing that the world was right.

It seemed a shame to let those berries go to waste, so he ate them all. When he turned around, the rest of the army had finished marching past. He could see the red coats of the last soldiers disappearing up the road.

Marching with those men before, he had been sure that he was doing something good, and that made him as happy as when he was at home. But now, looking at them made his guts squirm and his brow furrow. He didn’t want kings, but he didn’t want the army any more.

One last berry caught his eye. He plucked it off the bush, then turned and walked off across the fields, heading for home.