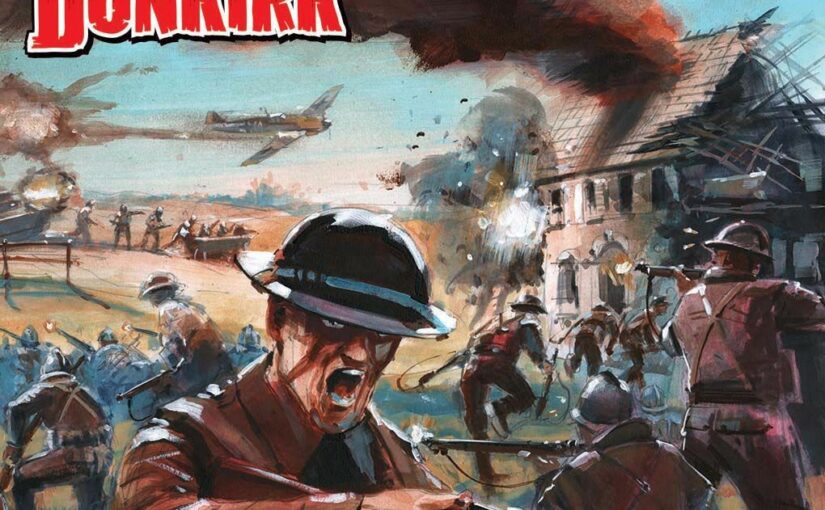 I have a pair of linked Commando comics coming out this week, to mark the 80th anniversary of the Dunkirk evacuation. Today, I’m going to talk about the first of them – Dodger’s Dunkirk.

Dodger’s Dunkirk follows a British infantryman caught up in the Allied withdrawal to Dunkirk.

The Battle of France, fought from May to June 1940, was one of the great disasters of World War Two. The Allies badly misjudged both German capabilities and the terrain they were fighting over. In one of the most dramatic campaigns of the war, the Germans smashed through the Allies’ weakest positions and ripped their forces in half. Thanks to the incredible blitzkrieg advances of German generals such as Guderian and Rommel, the bulk of the Allied forces were surrounded, forced to retreat into an ever-shrinking pocket against the coast, unable to effectively manoeuvre or bring their forces to bear.

This is the chaos that Dodger is caught up in – a shattered army trying to pull itself together, groups fighting desperate, heroic rear-guard actions while the generals try save what they can. But Dodger doesn’t want to withdraw. To him, retreat is failure, and the only thing a soldier should do is fight on. With a gun in his hand and a stiff attitude fixed across his face, he’s set for conflict with his own side as well as the enemy.

I created Dodger to represent a particular attitude towards courage and fighting spirit.

Holding strong in the face of danger takes a certain stubborn willpower, something that’s a necessity in war. Without the courage to hold your ground despite terrible odds and others’ fears, many battles would have been lost.

But that stubbornness can go too far.  Great military disasters have been born from an unwillingness to compromise, to back off, to accept the limits of what can be achieved and so to salvage something of value from a loss.

Dodger has that stubbornness gone too far. He has his reasons for this, which I won’t spoil here, but that doesn’t mean that he’s right. No Retreat is about a man learning that there’s something dangerous, something toxic in a virtue taken too far. Can he bend with the wind, or will the raging storm of Dunkirk break him?

The Dunkirk evacuation is rightly remembered as a significant moment in history, especially in Britain. The evacuation of 338,226 soldiers in eight days was an incredible logistical achievement, one that saved the bulk of the British army from destruction, along with 100,000 French troops and other Allied personnel. Without it, the Allied armed forces would have been significantly diminished and the remainder of the war might have been very different.

For me, there’s something even more significant about Dunkirk, and that’s the fact that we celebrate a retreat. Well-executed withdrawals are hugely important and hugely challenging to achieve, yet they’re almost never marked in this way. We just want to talk about the victories. With Dunkirk, we acknowledge the importance and the challenge of knowing when and how to give up. It makes the right retreat into a heroic achievement, breaking our narrow view of what qualifies as success.

In challenging and reshaping our view of history, it’s one of the key moments of the 20th century.

While Dodger’s Dunkirk exists to explore the big picture, historical fiction is also about the little details. So what is there to look out for in this comic?

One of my favourite bits is the Canal Line. As in the First World War, the Belgians opened the slices of their canal system to waterlog the ground, bog down the enemy, and create a stronger defensive line. It’s a small thing amid the carnage, but it’s also a good example of looking beyond the obvious in tackling a problem.

As with many of my Commando stories, the international element is important. The Dunkirk retreat wasn’t just a British effort. Belgian, Dutch, and French forces also played a significant part, and without them the withdrawing British troops would probably have been overrun. An encounter with a Belgian sergeant helps shape Dodger’s approach to the fighting, and there’s also a French tank crew who we’ll come back to in a minute.

This being a Commando comic, you can be sure that the artist will have filled in a lot of extra details, like the uniforms of the soldiers and the equipment they use – enough to please fans of the period. I’ll leave it to you to explore the visual treats that I can’t claim credit for.

Dodger’s Dunkirk is released on the 28th of May, alongside a companion comic, Durand’s Dunkirk, which follows a French tank crew through the Dunkirk retreat. I’ll provide some commentary on that one next week, and on Friday a short story tying into them both.

Until then, if you’re looking for more historical fiction then you can check out my mini collection of short stories From a Foreign Shore, and pick up copy of No Retreat on Thursday.