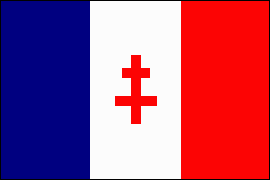 Captain Baptiste’s voice was a saw blade cutting into Verdier’s chest, leaving his heart and soul exposed. As the captain finished reading the telegram from home, the base’s officers stared at him in stunned silence.

“You cannot be serious?” Verdier said, his throat squeezing tight around the words. “We are simply to give in and collaborate with the Nazis?”

Sand swirled through the doorway of the officers’ mess, blown in on the last gasp of the past week’s defiant winds. Out in the streets, ordinary Algerians were going about their business, oblivious to the turmoil inside the French barracks, oblivious perhaps to the war raging across Europe.

“Deadly serious,” Baptiste said. “France has fallen, but Pétain remains, a good military man. When our orders come, we will obey. Go tell your men.”

Verdier walked slowly across the parade ground, dragging the captain’s words behind him like a ball and chain. He had heard the rumours of a government in exile, of De Gaulle in London and the Free French rallying to fight on despite their country’s fall. But discipline was everything, order was everything, and as long as Baptiste was his superior, he had to obey.

He entered the barracks room and surveyed his men. Their open books and half-finished hands of cards were a charade, and their attention focused on him the moment he entered. Every brow was furrowed, every back rigid with tension.

“It’s over,” Verdier said. “An armistice has been signed. We are to collaborate with the Germans.”

“But…” It was the closest any of them had come to challenging him since their first days together. They knew better. This was the army. Discipline was life.

In the corner, one man let out a stifled sob. Another flung his book down in disgust. Private Plantier gathered up the cards he had been playing with, straightened the pack with a sharp rap against the table, and then stood up.

“What are our orders, Lieutenant?” he asked.

Verdier opened his mouth, then closed it. An unexpected realisation swept over him. There were no orders yet, not from Baptiste or from any other officer. Those orders could end up being almost anything, depending upon who was giving them. On the one hand, there was Baptiste, the wavering conformist. On the other hand, there was Major Chapelle at the next town over, an opinionated officer and old friend of De Gaulle.

“Load your packs with provisions for three days march,” Verdier said. “Then assemble on the parade ground.”

He saw their confusion as they bustled about, and the growing hope as they whispered to each other and glanced his way.

Ten minutes later, they stood to attention on the parade ground. Verdier completed the roll call, straightened his own pack, and turned to face the gate.

Once he did this, there was no going back. It wouldn’t matter that he had followed every order he was given, not to anyone but him.

Baptiste emerged from the officers’ mess. His eyes narrowed as he looked at Verdier.

“What are you doing, Lieutenant?” he asked.

“Going out for a march, sir,” Verdier replied. “Our presence should remind the locals of who is in charge during these chaotic times.”

Both statements were true. If Baptiste chose to interpret them as connected, that was his own fault.

Verdier tensed. His men stood stiff behind him, perfectly disciplined, their expressions giving nothing away. If Baptiste gave Verdier different orders now, would he obey them? Could he ever do otherwise?

They were halfway out the gates when Baptiste called after them.

Verdier froze, turned on the spot, and looked back at his captain.

There was a knowing look on Baptiste’s face, and a flicker of sadness. “Good luck out there.”

I have a new comic out this week, an issue of Commando featuring Lieutenant Verdier in a tale of action and adventure set in the Second World War. So if you’d like to see what happens to him next, check out “Desert Vultures”, available on Comixology, through British newsagents, or as part of a bundle of issues via the publisher’s online shop.